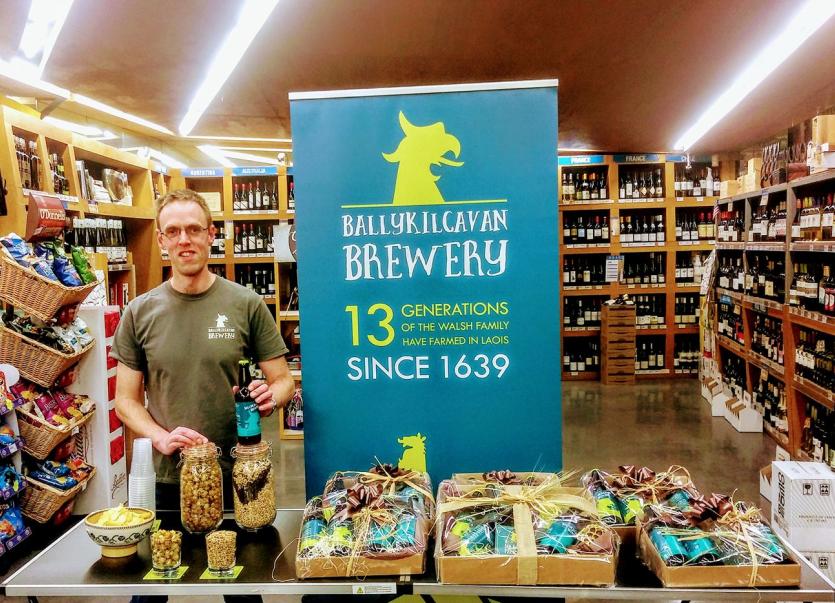 Ballykilcavan Brewing Company released a new and unique beer to the market on November 4.

It’s a one off batch which was brewed using hops sourced exclusively from the hop garden on their farm near Stradbally.

“Along with our barley, we’ve been growing hops for a couple of years, and they produced a really good crop this year.

“We recruited a team of interested people on Facebook and got them in for a day’s hop picking.

“We were then able to brew a beer where all the barley and all the hops were grown right here on the farm.”

The beer was launched in Egan’s off-licence in Portlaoise, and manager Mary Delahunty is very excited about it.

She said, “Customers are really starting to look for locally brewed beers made from locally sourced ingredients, so this has generated a lot of interest before it’s even in the shop.”

Only 960 bottles of the beer are going on sale, but David hopes to expand this in future years.

“We’re doubling the size of our hop garden, so with a bit of luck and some kind weather, we should be able to make two batches next year.

“Picking the hops is a really labour intensive process, but by getting a team in to help with the picking, it turned into a fun day out, so we’re going to make it into an annual event.”

Ballykilcavan Brewing Company was founded in 2016 by David and Lisa Walsh-Kemmis to make high-quality, tasty beers from the award-winning barley grown on their 378 year old farm.

The company was a national finalist in the Bank of Ireland Startup Awards in 2017 and is completely independently owned by the family.