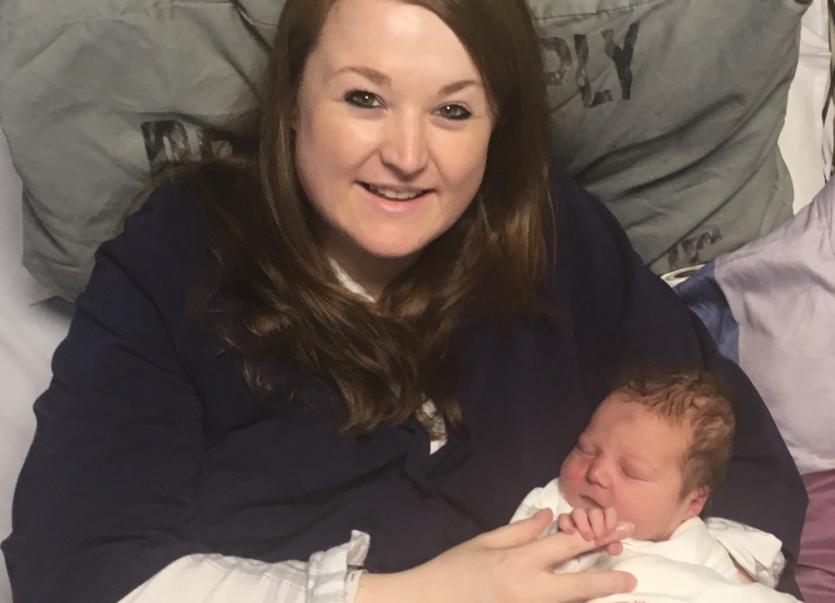 Storm Emma brought more than snow to one couple, who became new parents after an epic drive to Portlaoise hospital during the blizzard.

Niamh and Marcus Fenton from Donard in Wicklow had to drive for nearly two hours through snowdrifts and blizzards to get to Portlaoise hospital, after Niamh's waters broke ten days early.

The couple live in rural countryside a mile outside Donard village, and attended Midlands Regional Hospital Portlaoise throughout the pregnancy.

Marcus is a self employed agri contractor, and last Thursday night March 1 as snow was bucketing down, he came home to Niamh from a day of clearing snow from roads for the county council.

"By the luck of God he drove the loader home. He said to me 'whatever you do, do not go into labour tonight'. But at 1.30am I woke up and my waters had broken," Niamh told the Leinster Express.

They phoned the hospital and were told to come straight in. Marcus first had to get back out in the blizzard and clear the road from their house so they could leave.

"It was nearly scarier for him. I was pottering around the house packing bags, with no idea how bad it was outside. The road he cleared was already covered in a foot of snow when we left," said Niamh, whose labour pains had not yet started.

Their friend Alastair then arrived in his pickup, and he drove the loader in front of them, to begin the long trek to Portlaoise at 3am on Friday morning. It normally takes an hour, but took nearly two.

"It was absolute madness the whole way. Alastair led us as far as Kilcullen for about an hour. There were crazy snowdrifts, the height of the car. We couldn't see the road ahead because of the blizzard. I was so nervous that we would end up in the ditch," said Niamh.

The snows were not as bad nearing Portlaoise and they arrived close to 5am.

"They were all waiting for us at the hospital, they couldn't believe we had braved the storm. The staff were absolutely fantastic. I just thank my lucky stars that we didn't have to go to a Dublin hospital, it is absolutely necessary to have this maternity unit in Portlaoise. The level of care I got was unbelievable, I can't speak about them highly enough," Niamh said.

Huge gallery of your snow photos across Laois

Baby Adam Kevin Fenton decided to wait a little longer, and was born safe and sound on Sunday March 4 at 5pm, weighing a healthy 8lb.

"Poor Marcus had to sleep in his jeep, he couldn't drive home. If we had waited until the following morning, we wouldn't have made it through the snow. It was a miracle it happened when it did, before the snow got too high," said the happy new mother, who is presently recovering with her snow baby Adam in the maternity wing.

"If he was a girl it would have to have been Emma," Niamh said.

Heroic work by Portlaoise Order of Malta during #stormemma