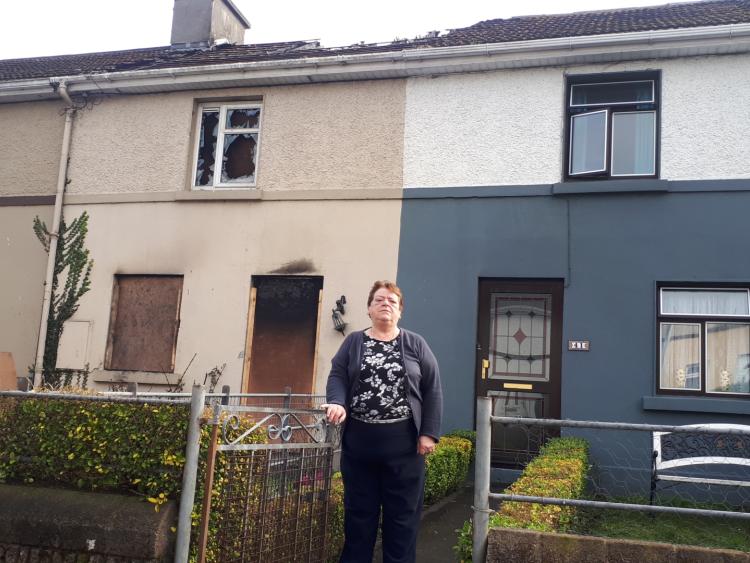 Mary Dwane at the front gate of her home in O'Moore Place, damaged after a fire gutted the house beside her.

The chief executive of Laois County Council had strong words of condemnation about a council house recently burnt down.

Number 43 O’Moore Place, was boarded up last November after it was damaged in an incident, but was destroyed by a fire on Friday afternoon March 9, in a case of suspected arson.

The row of five houses was vacated and houses both sides were damaged as fire crews worked to stop the fire from spreading, with several neighbours still unable to return until their homes are repaired.

“It was a despicable and mindless act, the burning of that house,” John Mulholland said, at the March council meeting.

He was asked by Cllr Caroline Dwane to work quickly on a regeneration plan for the estate, and for Hepburn Court in Portlaoise which is entirely derelict.

“Given the seriousness at present, with houses being burnt. A massive part of O’Moore Place is actually derelict now, literally.

“It is more or less an eyesore, it’s very sad.

“ I know you are talking about a plan for later in the year, I ask that you please prioritise it,” she said.

Her mother Mary Dwane is among those unable to return home until her house is repaired.

“Unlike Hepburn Court, there are people trying to live in O’Moore Place and raise their families.

“People there feel they are left behind,” she said.

“I want to acknowledge the Gardaí who are maintaining great presence in the last week or so,” she said.

The council chief assured her that the regeneration plan is “top of our agenda”.

“We are working very diligently in recent weeks on a regeneration plan.

“It is on the top of our agenda, to find a plan suitable for all, I hope we are making progress,” Mr Mulholland said.