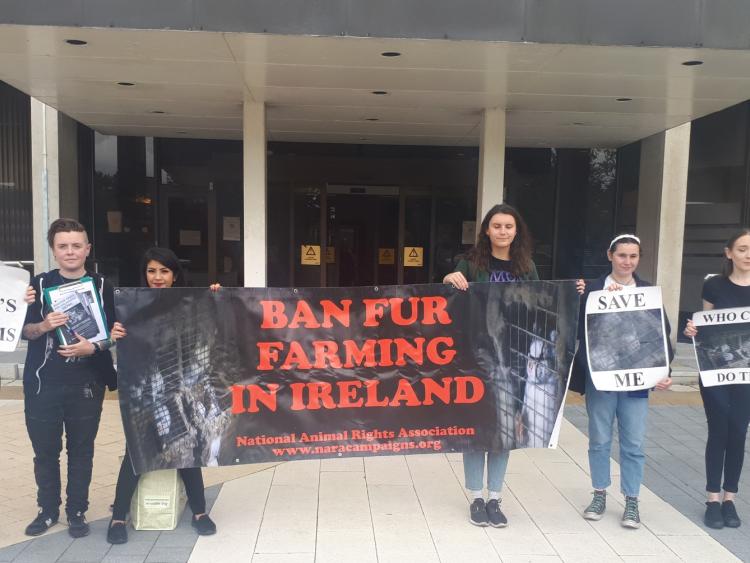 Members of the National Animal Rights Associate (NARA) traveled to Laois with a focus on building support to ban fur farming in Ireland.

Laura Broxson from NARA told the Leinster Express that they were trying to get support from Laois councillors.

“We are trying to get Laois County Council to propose a motion to ban fur farming and we feel even though it may not have a huge legislative effect, symbolically it is a great message to people that it is time for fur farming to be banned and it is to coincide with a bill that is being proposed in the Dail in September to ban fur farming in Ireland. It is being proposed by Ruth Coppinger from Solidarity and we are hoping that with enough effort, it will pass,” she said.

The group were handing out information leaflets. The leaflet says that there are currently three mink farms in Ireland where annually “around 200,000 animals are killed”.

The leaflets also state “Mink are kept in filthy cages, with a floor space equivalent of just two shoe boxes in size. They have no access to water, even though there are semi-aquatic animals. Their diet consists of liquidised animal flesh, which they are forced to consume by licking it through the top of their cages. They are forced to live with, and beside other mink, despite being solitary creatures by nature. This, coupled with the stress of confinement, results in stereotypical psychosis - repetitive behaviour, self harm and cannibalism”.

The group is asking people to contact Minister for Agriculture Michael Creed who is responsible for licensing the fur farms.

The United Kingdom, Austria, Croatia, the Czech Republic, Hungary, Norway and the Netherlands have all banned fur farming.