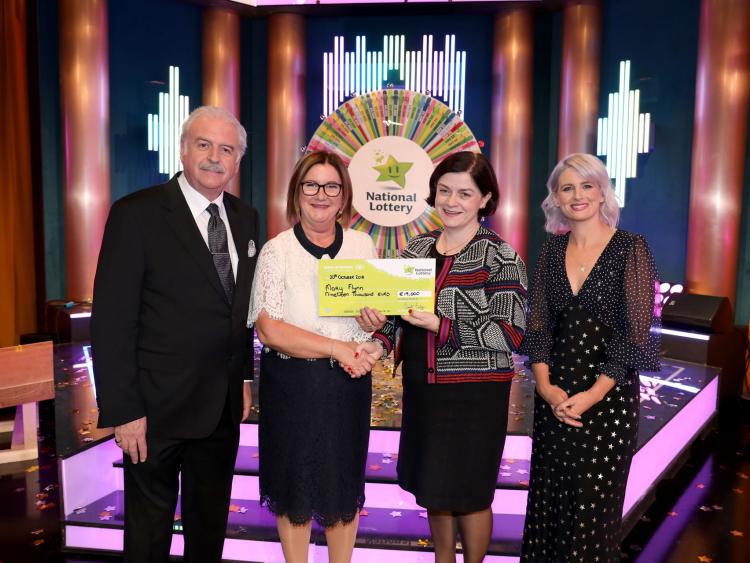 It was a busy week for proud mum, Mary Flynn from Portlaoise in Laois who had a family wedding, her son’s graduation and a Winning Streak appearance. She managed to bag herself a tidy €19,000 Winning Streak bonus.

Mary, who works in the pharmacy at Portlaoise Hospital, bought her ticket in Portlaoise post office. She was at a family wedding in Monaghan last weekend and Winning Streak was on in the bar but she never saw her name come out. She checked her phone, which was on silent, and saw she had a lot missed calls and text messages from her friends telling her a Mary Flynn had been drawn to appear on the show she was half watching on the TV.

This week Mary, who celebrated her silver wedding anniversary of 25 years to Pat this year, was a proud mum as she attended her son’s graduation. Son, Kieran graduated from NUI Galway last week with his degree in Civil Engineering and Mary couldn’t be prouder. Kieran and some of his friends were in RTE to cheer Mary on last Saturday. Mary and Pat’s other child, daughter Helen has only recently flew to Australia where she plans to work and travel for the next two years. She watched the show on the RTE Player.

With her winnings from the show, Mary will visit Helen in Australia next year and will get a new suite of furniture. However, the kind-hearted Mary surprised her best friend, Debbie on the show by announcing that she will pay for them both to take the holy pilgrimage to Medjugorje in Bosnia / Herzegovina. Both friends had made a promise years ago that they would go as soon as they have put their children through education – Mary is going to pay for them both a couple of years earlier than both expected.