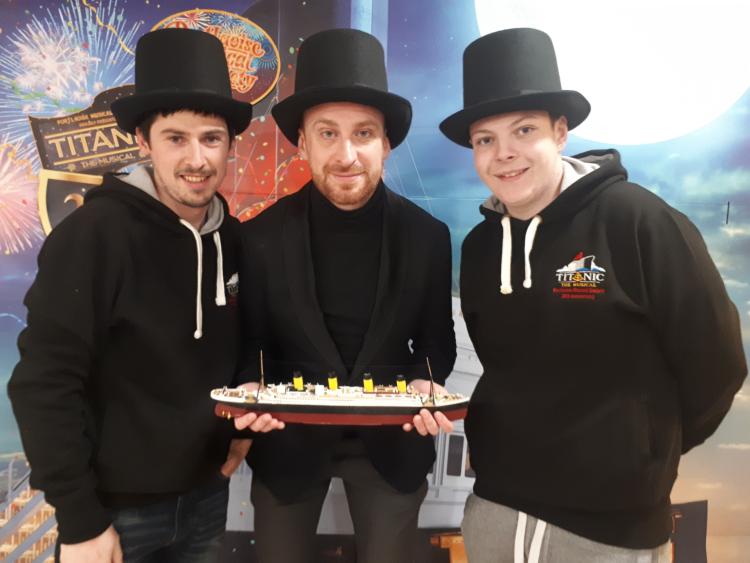 Portlaoise Musical Society's 20-year voyage entertaining local people set sail for another year at the Dunamaise Arts Centre with the launch of its 2018 epic production of Titanic - the Musical.

The society's cast and crew launched their 20th-anniversary production at the Dunamaise Arts Centre in Portlaoise which will host the show from 24 November to 1 December.

Based on real people aboard the world’s most legendary ship, this stunning and stirring story is focused on the hopes, dreams and aspirations of the passengers, as they face one of the most tragic disasters of the 20th Century.

The 2018 AIMS Award winners (Best Visual & Runner Up Best Technical), present one of their most ambitious and spectacular productions to date, featuring an amazing cast and crew from Laois and beyond! This brilliant new show has won sweeping critical acclaim worldwide.

Chairperson of Portlaoise Musical Society, Sharon Dunphy said: “We are thrilled to be able to say we have enjoyed 20 amazing years and 19 productions to date. We are delighted to bring top quality performances to the public each year, through artistic excellence and imaginative programming - from our committees, casts and crews.

"We exist because we are passionate about musical theatre and to support the artistic and educational activities of our volunteer members and we recognise the immense commitment that each gives every year, without which we couldn’t exist! We can’t wait to bring our biggest and best production yet to the stage this November/December to celebrate our 20th anniversary”.

Portlaoise Musical Society which was formed in 1999, has enjoyed 20 very successful years, having presented amazing shows years on the year and won various AIMS national musical awards ranging from Best Actress to Best Male and Female Singers, Best Director to Best Technical and even more nominations. Their musical repertoire includes the following:

The stunning 20th Anniversary show in Titanic - The Musical will be presented by a 74 member cast and team including Director Paul Norton, Choreographer Grace McGrath and Musical Director Emer Hartnett.

Titanic-The Musical takes place at Dunamaise Arts Centre Portlaoise from Saturday 24 November to Saturday 1 December at 8pm nightly, other than an earlier start time of 6 pm on Sunday 25 November. Tickets are priced €18/€15/€12 (Conc. Sun & Mon only) and are on sale from Dunamaise Box Office, Tel: 057 8663355 or www.dunamaise.ie.