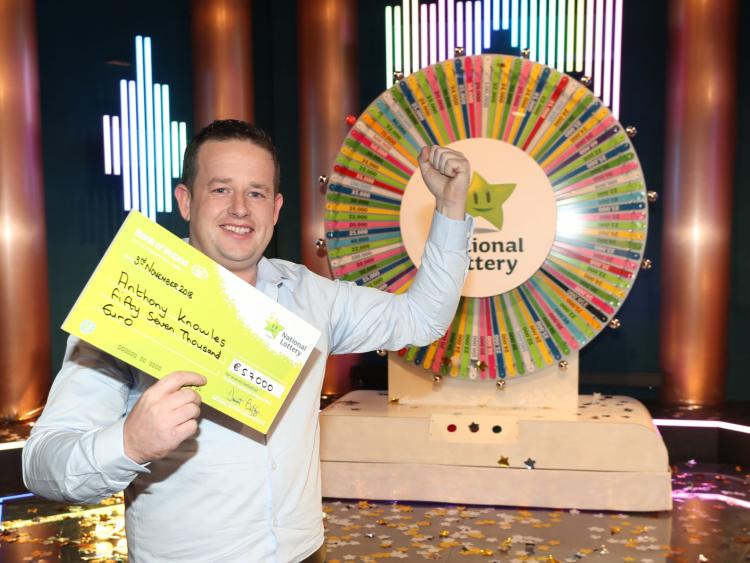 Anthony Knowles from Ballyroan celebrates his streak of luck

The father of a little Laois girl who suffers from a rare form of epilepsy appeared on RTE’s Winning Streak at the weekend and took home €57,000 in prizes and money.

His Winning Streak appearance could not have come at a better time as Anthony Knowles had stated that the family may need to move to the Netherlands for little Mary-Claire to get treatment for her life-threatening condition.

She suffers from repeated seizures and is often rushed by ambulance to Portlaoise hospital for life-saving treatment.

Her struggle came to national attention this year when the family featured on The Town television series.

On this programme, Anthony and his partner Rose spoke of the harrowing prolonged seizures that their daughter Mary-Claire has and how they could be forced to move abroad for treatment as medicinal cannabis treatment is not legal in Ireland.

Her father, Anthony Knowles, made a television appearance for a happier reason on Saturday evening on the National Lottery Winning Streak game show.

The nation held its breath as Anthony was chosen as the contestant to spin the big wheel at the end of the show.

Anthony spoke to the Leinster Express on Monday and said the shock was only sinking in two days later.

“We are going to get Mary Claire on the right road we can't see past that right now. This is what we were waiting for.

“Everyone in the country and the others players on Winning Streak were delighted that I got to spin the wheel. It is only hitting me now today,” he said.

Anthony is going to use the money to travel to the Netherlands on his own to see what treatment is available for Mary-Claire.

They will decide from there the next steps they need to take to care for her.

They have stated before that travelling puts Mary-Claire in a vulnerable position to have seizures.

Mary-Claire is doing well at the moment but she has had many intense seizures in her two and a half years.

Despite this, she is miraculously not brain damaged.

Anthony has lived in Ballyroan with his wife Rose and three children Mary-Claire (2), Daniel (6), and Anthony (4) for the last decade.

Both boys enjoyed supporting their dad from the audience last Saturday. Mary Claire was excited to watch her daddy on the television at home.

Anthony thanked all of the people who have supported the family particularly those in Ballyroan and anyone who has held fundraisers for Mary-Claire.

“It has been two big weekends in Ballyroan. Scully’s had a fundraiser and the whole community came out and raised almost €20,000 for Mary-Claire.

“It is unbelievable and a great feeling off genuine people who have been wishing us well, especially as we are blow-ins to the area,” he said.

He also thanked anyone who has had local fundraisers including Claire Duggan who raised €3,500 and Yvonne Culleton who raised €2,500.

Anthony bought the Winning Streak scratchcard from Bernie Worrell of Worrell’s Gala, in Kildangan, Co Kildare, and posted it from Ballyroan.