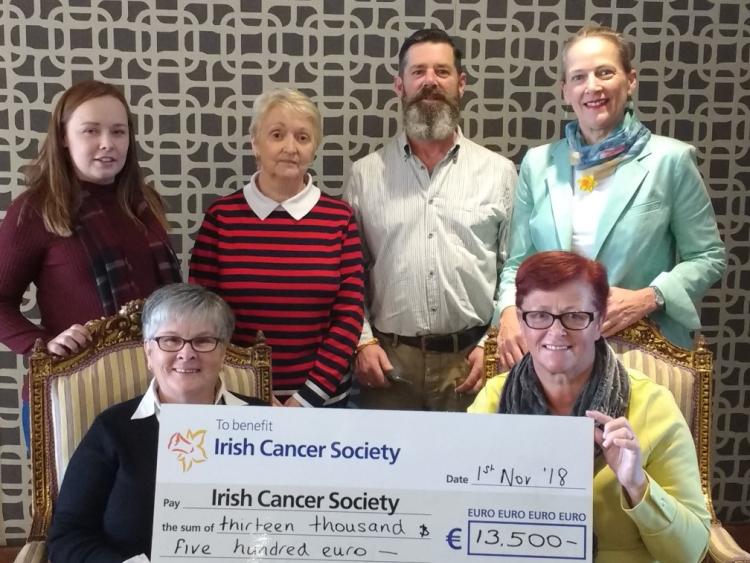 A week after it emerged that a Laois resident donated €6 million to cancer care a Portlaoise group has helped raise thousands of Euro for the Irish Cancer Society.

The Irish Cancer Society has thanked the Portlaoise Daffodil Day committee who has raised €13,500 to fund free supports for people affected by cancer.

The committee presented the cheque to Emma Hayden, Irish Cancer Society, at a recent event held in the Killeshin Hotel.

The money was raised by street sales and coffee mornings/evenings, all of which were generously supported by local people.

The Society receives just 2 per cent of its funding from the State and needs to raise one-fifth of its income through Daffodil Day donations alone to meet the growing demand for support. Locally, the Society provides a number of services including Night Nursing which cares for terminally ill cancer patients at home.

“We are so thankful and heartened by the generosity of the committee and members of the public for the support they have shown for our most crucial fundraiser. Money raised on Daffodil Day funds lifesaving cancer research and vital support services for people with cancer.

"This money is essential to ensure we can meet the growing demand so that no one has to face cancer alone,” she said.

The cancer society announced last week that a €6 million donation from Elizabeth Kelly, who lived in Stradbally near Portlaoise, was the biggest ever single sum received in the charity's history.