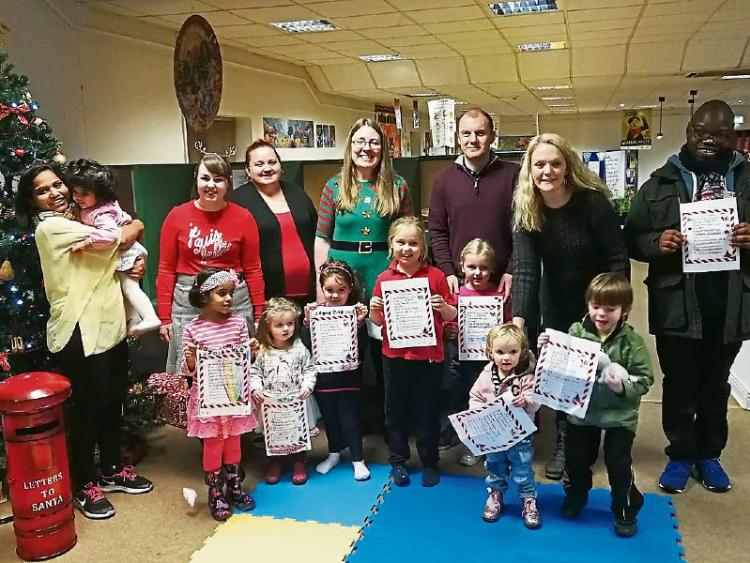 Several children wrote colourful letters to Santa Claus and decorated them with glitter, beads, glue and paints at a workshop in Portlaoise library recently before posting them in the library North Pole Express post-box.

The hour-long fun afternoon began with librarian Suzanne Carroll reading Christmas stories and poems to the group of excited children before they gathered around a table which contained everything that they could hope for to create their personalised letters.

Parents and guardians were on-hand to help the young children with their creativity as were librarians Erica Lewis and Suzanne Carroll.

The letters contained the children’s names, ages and they all filled in that they had been really good throughout the year.

They also wrote some nice things that they had done on their letters with caring and sharing being very popular.

Of course the children also had to write what they wanted from Father Christmas this year.

Lego, Skushy Skwishy Unicorns, robots, dolls, wheelies, an IPod and a bike were some of the presents that the children asked for.

The event was so enjoyed by children and adults alike that another Santa Claus letter writing workshop will take place in the library on Wednesday 5 December (tomorrow) at 3.30pm.

Following this, all the letters will be sent directly to Santa Claus himself by the librarians who have a direct line to Santa in the North Pole.

The workshop is free and parents who wish to take their children along are welcome to contact the library on 057 8622333 to book places.