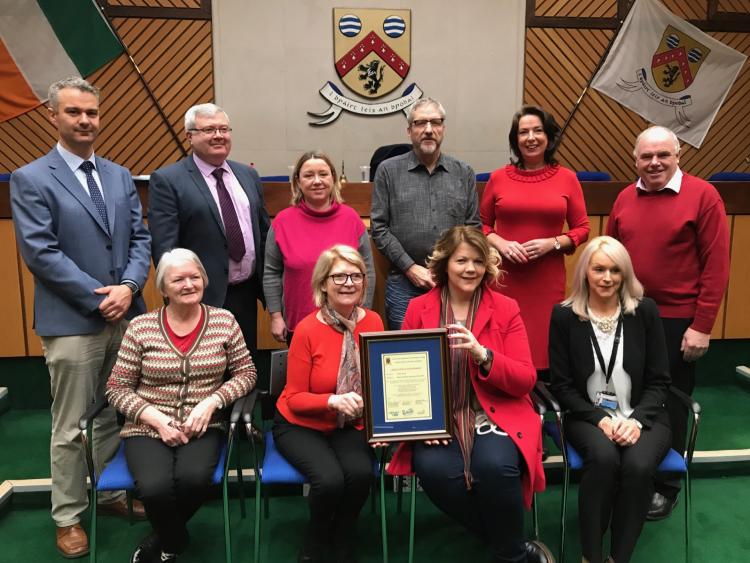 Portlaoise municipal district presented its first-ever Certificate of Achievement to a Laois gift store for winning a national award recently.

Nook and Cranny on Main Street in Portlaoise was crowned as National Gift Store of the Year 2019 at the Retail Excellence, the largest Retail representative body in Ireland, awards in November.

The certificate, which commended the owners Ladonna and Mark McCartan on their award was signed by Cathaoirleach of the Portlaoise MD Cllr Catherine Fitzgerald, CEO of Laois County Council John Mulholland and Director of services Kieran Kehoe.

Director of Services at Laois County Council Kieran Kehoe congratulated Ladonna and Mark on their national award for highlighting Portlaoise as a national shopping destination.

“Over the years we have celebrated successes at national level across lots of different areas, sporting usually but this is an all-Ireland competition, this is something that more so it is something where Ladonna and Mark and their shop have put themselves up for extreme scrutiny against all their competitors nationwide, against huge franchises and chains with a huge amount of money behind them.

“They are a champion of success for Portlaoise, for themselves personally and for Portlaoise. It envisions what we are trying to do with Portlaoise town, we are becoming a destination of choice for retail so the fact that we have the national winner, the all-Ireland winner for the best gift store in Ireland puts Portlaoise up there as a place to come for all of Ireland to come and shop.

“I want to personally thank on behalf of Laois County Council, the executive and the members as well for the phenomenal contribution of Ladonna and Mark have made to the town centre, the Main Street but also to your engagement in relation to the town team and I am delighted for you personally as well.

“This is some recognition of the efforts that you have made in the store itself, it is fantastic. When we argue about car parking and getting people into a town centre, I have always said people come when there is an offering to attract people and you have provided that offering and I will note that there is no parking directly outside Nook and Cranny, it just shows you can be a winner without having a car parking space outside, the best gift store in Ireland, well done,” Mr Kehoe said.