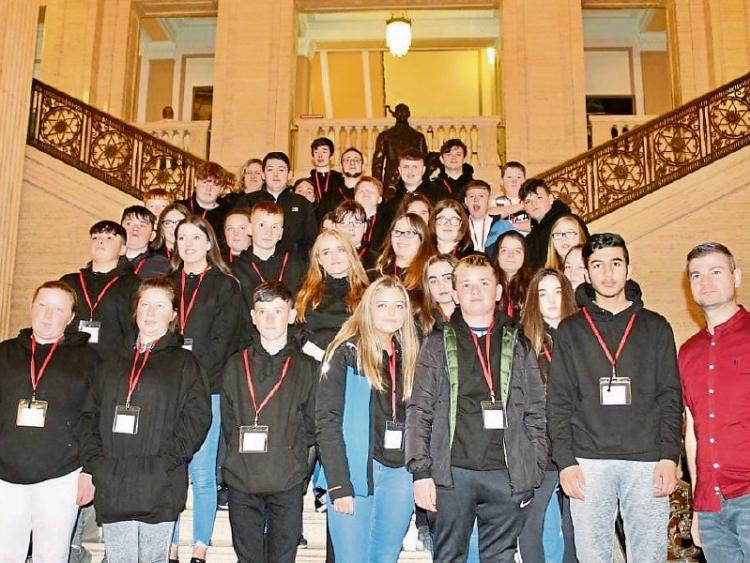 In total, 33 young people took part in the five day project in Newcastle and Downpatrick.

The purpose of the exchange was to explore cultural differences and build positive relationships between the three countries through participation in workshops and activities. These programs were structured around the topic of “Brexit, Borders and the EU”- a topic chosen by the young people themselves as a relevant issue that they feel affects them and their future.

Ten young people, accompanied by one staff member and two youth work volunteers made the journey to Newcastle in October joining the Patrician Youth Centre and Getting Better Together Project for the 5-day residential.

The first few days were designed to ensure that the young people were given the time to establish relationships with each other before getting involved in intensive – topic-based workshops.

The young people also began planning for a visit to Stormont by working in “parties” to debate topics such as Borders and immigration. Each team were “assigned” a stance- either for a hard border between Northern Ireland or against a Hard Border. Groups also studies the pros and cons of immigration as well as pros and cons of Brexit as a whole.

The young people assigned “speakers” within their group who would be responsible for expressing their points in the Parliament buildings in Stormont the following day.

After a tour of the Parliament Buildings four young people from the Portlaoise FRC volunteered to speak during a debate.

Despite the anxiety of speaking in front of 32 other young people, each of them did an exceptional job and made valid points in relation to their position.

After the debates the young people voted unanimously that there should not be a hard border between the two countries and that the UK should remain in the EU.

Main reasons for this included the consideration of the good Friday agreement and concerns that if there was a hard border that this would result in issues arising again between North and south Ireland and also between Loyalists and Nationalists in Northern Ireland. Reasons for remaining within the EU were around free movement and trade.

The young people were treated to an evening of fireworks and a street parade in Newcastle on their last night, which was run by the local council.

As it coincided with Halloween, many of the young people took the opportunity to dress up and enjoy celebrating the end of their residential with a party in the centre.

Many of the participants attending gained a great deal from the exchange project on a personal level.

Many of them had stepped outside their comfort zones and pushed themselves to undertake new challenges. It was noted throughout the week that significant changes were occurring each day with the young peoples confidence and self esteem.

In the weeks following the exchange the young people have been in contact with their new friends from Scotland and Northern Ireland.

Some of the young people have also been involved in talks and speeches at school and youthreach around the topic of Brexit and borders which they stated they felt confident to do, given that they had participated in the exchange.