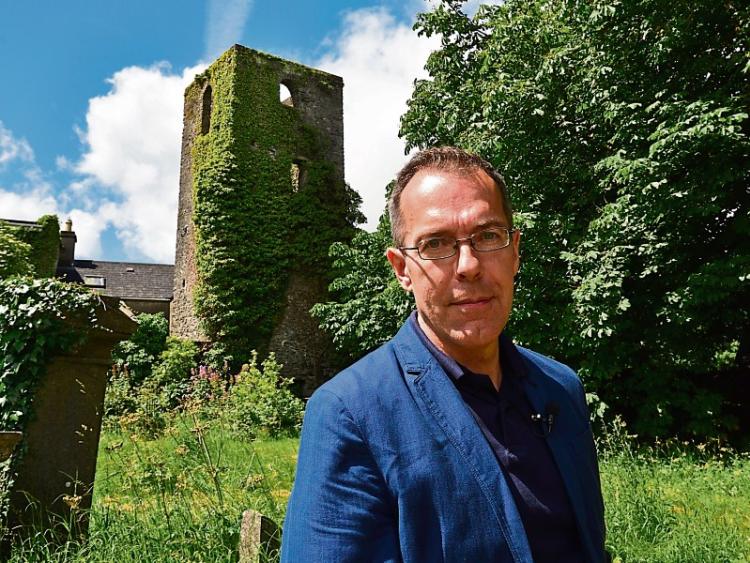 Portlaoise poet Pat Boran plays a key part in new film about the changing face of Portlaoise called 'Walking Back To My Heart' . Picture

The dramatic changes to Portlaoise's landscape and population are at the heart of a new film to be screened in Portlaoise next week.

'Walking Back To My Heart' is the work of award-winning broadcaster and documentary maker, Ann Marie Kelly and produced by her husband Stewart Quinn.

Shot over three years, the film focuses on stories from the past and looks to reimagine the future of Portlaoise through the eyes of a group of 12 children, led on a walk around the heart of the town by renowned local poet and author, Pat Boran.

Ann Marie, who is known to many from her work on Midlands 103fm Radio, told the Leinster Express the film was inspired by the closure of the primary schools in the town centre, in particular, the Presentation project.

She felt this represented the radical change the town is undergoing. What struck her most was the closure of the convent school.

Anne Marie believes the building and a group of children who moved to the new Holy Family schools represent Portlaoise's past present and future, so she made them the key players in the film.

She drafted in Portlaoise poet Pat Boran as a guide to show the children the heritage and history of the 'old ' town.

During their journey, the children find hidden, amidst the decayed areas surrounding the Main Street, the possibility of new life.

Pat also revisited his childhood classroom in the convent. Ann Marie also interviews some of the nuns who called the convent their home. The film also includes 'magical' and good quality footage of the town and its people in times gone by.

Another feature is a public meeting about the future landscape of the town centre.

Ann Marie also reunites a class who left primary school 50 years ago in Portlaoise for the film.

“It is charting a town that is going through a huge transition. It is giving us hope. The children are part of that picture,” she said.

The film is currently being submitted for consideration on the international film festival circuit and is supported by Creative Ireland funding.

Ann Marie's first film "Wally" was broadcast on RTE One television in 2013.

In October of this year, Ann Marie picked up 2 IMRO National Radio Awards for her Open Door programme on Midlands 103, and as Specialist Music Broadcaster of the Year.

The film premieres at the Dunamaise Arts Centre on Monday, December 17 at 7pm.

Tickets for the event are priced at €7 with all proceeds being donated to the special needs classes of Holy Family Junior School.

There will also be a question and answer session with the production team after the screening.