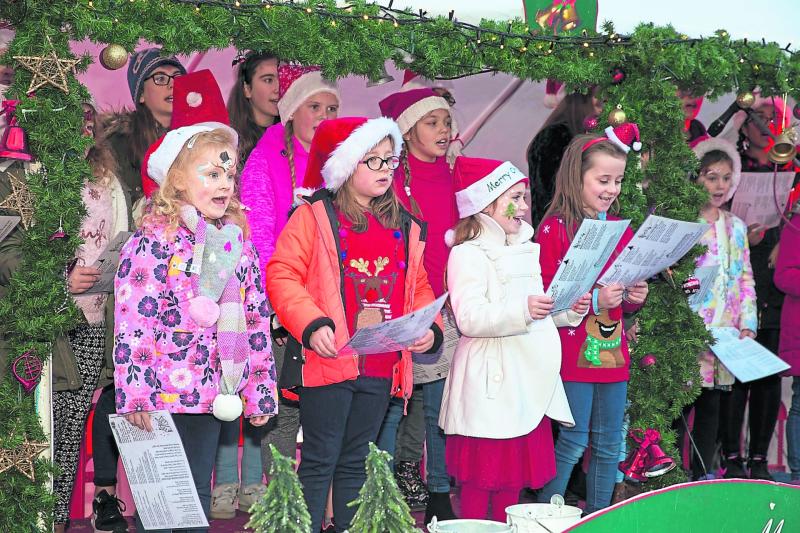 Catherine Quigley's Junior Choir performing at the Portlaoise Christmas Market and turning on of the Christmas Lights. Picture: Alf Harvey.

Portlaoise Christmas lights and everyone involved in putting them up were praised at the December Portlaoise Municipal District meeting in Laois County Council.

Cllr Pauline Madigan tabled a notice of motion to thank Laois County Council for 'the most beautiful Christmas lights'.

“Our motions tend to be giving out and looking for stuff so it is nice especially during Christmas to say thank you. I genuinely was blown away the first time I drove down Main Street and I saw the lights this year. If Christmas is about doing a little something extra for everyone we can really see what’s happened here, we are always giving out but the lights of Laois are shining brightly,” she said.

“I think it is unanimous from everyone here, I want to congratulate everyone involved. This town team is the best thing I have ever seen happening in Portlaoise under the direction of Kieran Kehoe. There are so many people working together, members of the council, the business community and from other organisations, it is fantastic and they have done so much work. This is one example that is coming forward from this town team. The progress and plans in place for Portlaoise is out of this world, I am delighted with what has taken place,” she said.

“Thanks to everyone involved in particular the downtown traders group,  Alison Browne is the chair of that group and has been hugely supportive in relation to getting the lights to where they are,” he said.

While Portlaoise was inundated with words of thanks and congratulations, smaller towns outside of Portlaoise are still fundraising for their own lights.

Cllr John Joe Fennelly asked if the funding support from Laois County Council could be extended to Abbeyleix and rural towns next year.

“I would like to congratulate all involved and maybe from the rural side of the community that maybe next year there might be something there for the likes of Abbeyleix who are making great strides but might do with a bit of backing down the line, and the other villages as well in the area," he said.

“I want to compliment everybody involved because they really are stunning, it really enhances the town and has brought it to life. We would want a little bit of funding towards our own little areas. We are having a church gate collection in Ballyroan for ours and to be fair about it that’s the only method we have to try and gather any money and they are expensive, the electricity is so expensive every year,” she said.

Cllr Pauline Madigan asked the council if they could extend the lights to the far side of the Top Square in Portlaoise next year.

Read also: Couple left stranded at Laois train station when disability access was out of order