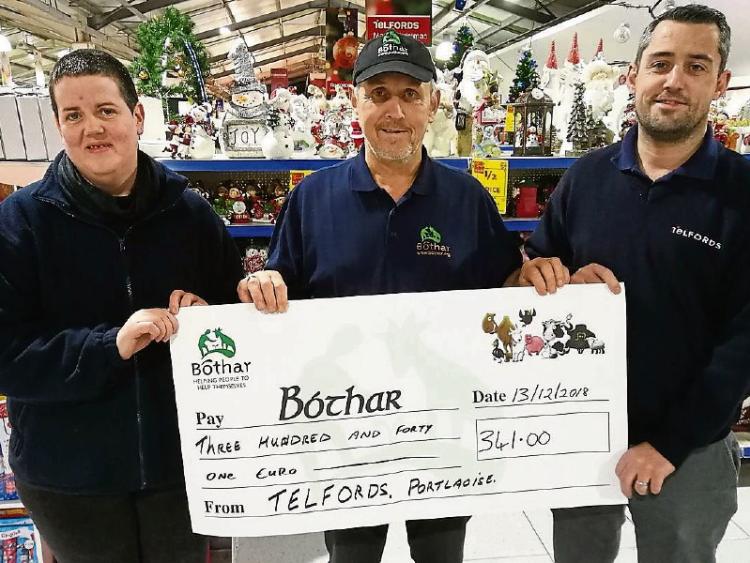 Pictured at Telfords Portlaoise with a cheque for the contents of the store's Bóthar collection boxes are Teresa Lowry, Gerry Furlong and DIY store manager Damien Goodwin Photo Stan Henderson

A Portlaoise resident who was nominated for a Laois Community and Voluntary Unsung Hero Award in 2017 for keeping a large area of the town litter-free.

In the process he has fundraised over €4,000 during the past two years for his beloved charity Bóthar which provides Irish livestock to families in third world countries.

Gerry Furlong who is originally from Wexford has lived in Rockdale on the Mountrath Road for almost 20 years.

Gerry can be seen regularly wearing his Bóthar high visibility coat accompanied by his loyal well trained dogs Bobbie and Coco as he embarks on Gerry’s Litter Drive.

He litter picks discarded rubbish from the top of Father Brown Avenue to the bottom on both sides of the road then up the Abbeyleix Road to the Top Square and back up the Mountrath Road until he reaches his home.

Bobbie the brown Labrador and Coco the Yorkshire Westie cross are so well trained that Gerry can cross the busy road at any time to pick litter on the opposite side and the dogs will not follow him over. Rather they will both walk happily along on their own side of the road keeping up and will wait until Gerry comes back across.

The entire four kilometre circuit takes over two hours to complete but can sometimes take longer if matches have been played in O’Moore Park at the weekends as Gerry says that there are no bins provided by Laois County Council along the busy thoroughfare.

Gerry takes up the story.

“I am an avid walker and I was walking the dogs along that circuit the day after Saint Patrick’s Day in 2016 after a major football match had been played in O’Moore Park. The Tidy Town volunteers had removed around 10 tons of rubbish from around the town at the time but the road had been so dirty that they couldn’t get it all.

“I noticed how hard it was going to be to get all the litter while on my walks especially the smaller bits and pieces. It took me three weeks to have it completely clean and then I decided that I might as well stay doing it in the long evenings or at the weekends when I’m not in work.

“A good friend of mine jokingly asked me if I was doing community service having seen me several times picking litter and I said no and told him what I was doing. He suggested to me to start collecting for a charity so I went around the businesses that have road frontage on my route asking for support and I got a very positive reaction from several of them.

“I then approached Bóthar and asked if I could use them as my chosen charity. They were delighted and they gave me leaflets with details on how to donate and then the money started rolling in.

“I chose Bóthar because I come from a farming background myself and a large family. Everything we ate growing up came from the farm. I understand the importance and sustainability of having farm animals and livestock and what it means to families and this is what Bóthar provides for families in third world countries.

“Every family that gets a donation of an in-calf Irish dairy cow notices a huge difference to their lives as it will give up to 20 litres of milk per day. For example in Rwanda the local indigenous cow produces just one litre of milk per day. When the cow calves it continues to provide milk once the calf has suckled. The cow can be inseminated again as can the calf when it reaches maturity at between one and two years old. A cow can live for 20 years so from the initial in-calf heifer that was donated many families can benefit over the years. It’s fantastic.” he said.

Gerry has several different businesses along his route that allow him to use their bins including Portlaoise Garda station but he is appealing to Laois county Council to provide several bins along his route saying that when people are on their way to a match with bags of chips and minerals there is nowhere for them to dispose of their rubbish hence they discard it onto the footpaths and into ditches and it blows all over the place.

Above all, Gerry wishes to thank everyone who continually supports him and donates to Bóthar on his behalf in any way.

For those who wish to donate to Bóthar on Gerry’s behalf log onto its website www.bothar.ie using the keywords Gerry’s litter Drive 747 in the search bar or phone Bóthar directly on 1850 829999.

Bóthar collection boxes are at tills in businesses along Gerry’s circuit.