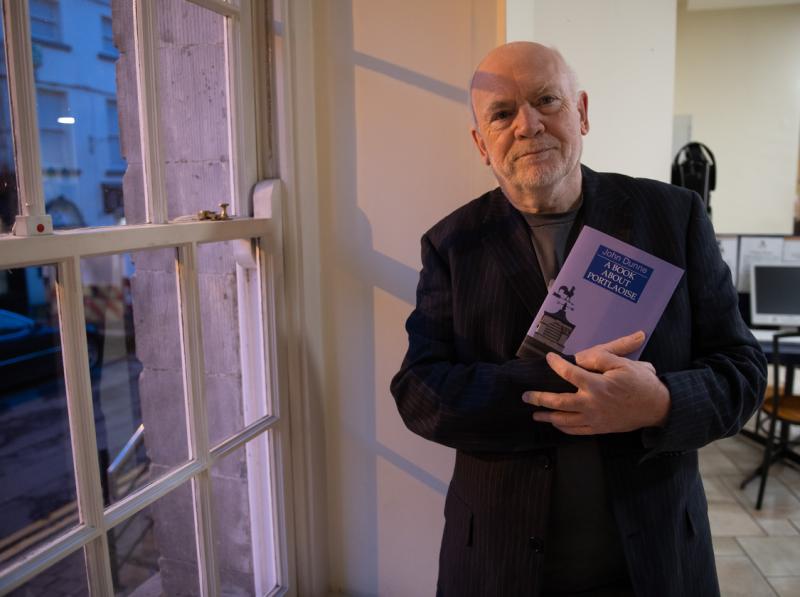 With over 200 years of Maryborough in his blood from both sides of his family, proud townie John Dunne has released a brand new book, ‘A Book About Portlaoise’.

The book was launched to a packed Dunamaise theatre on Thursday evening, March 7.

It was a night of nostalgia as a slideshow of pictures of ‘vanished’ Portlaoise had the packed theatre audience drawing up memories of times past that had been long forgotten. There was a huge focus on businesses on Main Street and Market Square over the years.

‘A Book About Portlaoise’ is a snapshot in time of the social history in Portlaoise. In the book, John has explored the seemingly insignificant things, the lives of the ordinary people that have made and continue to make Portlaoise what it is.

He said the book was driven by three emotions ‘curiosity, love and pure ignorance’. It is a record of life now for generations to come and an appreciation of ordinary people.

“Nowadays we are living in an age of rampant globalisation. From powerful corporations down to the dominance of mobile telephones right down to the way so many Irish people speak with idioms and accents that are not their own, I don’t like that.

“I think it is very very important that we support local endeavour and we cherish and record our way of speaking, our habits for future generations. The little insignificant things that are all part of what we are," John said.

“I think you will find that the book is full of ordinary people. Ordinary people, I believe, are as worthy of historical mention as any saint, general, sporting hero or Taoiseach. In today’s world, I find that ordinary people are too often treated as mere commodities sometimes even with contempt.

“Take banks, for instance, doing their very best to eliminate any sort of personal contact, if you need to call revenue or any telecom company you better have a flask and sandwiches with you. No wonder, more and more people are feeling alienated,” he said.

John explained how his father was a keen storyteller who loved to talk about the people of Portlaoise. As a child, he was never interested but he has grown into it.

"It’s in my blood. On both sides of my family on the Dunnes and Lalors, we go back to Maryborough and its environs at least 200 years.

"Genes move in mysterious ways and there is a long, long, long local history behind everything I am and everything I do. Not just physical appearance but in my speech. As well as my mother’s love of music I also inherited her lisp. But my demeanour, my gesture, my attitudes in the proverbial nutshell my way of interacting with the world, almost by a process of osmosis, my father’s love of talking about the town has been passed on to me.

“Daddy had a phenomenal memory but in later years when he knew I was getting interested in this whole area, I sometimes wondered if he wasn't having me on. I remember on one occasion he swore to me that he remembered being baptised in Ratheniska church, it was of a Sunday and it was snowing.

“Look at me now, I have turned into my father. Be careful gentlemen, the same thing will happen to you,” he said.

John dedicated the launch night to the late Malcolm Smith.

“I would like to dedicate this evening to the memory of Malcolm Smith, wherever you are tonight Malcolm I hope there is music and I hope that you are there in the thick of it and I hope that you would be happy with the few words that I have written about the Smith family, the town’s foremost musical family,” he said.

Award-winning broadcaster Ann Marie Kelly was on hand to help John launch the book. She said history is safe in John’s hands.

“I love calling John a keeper because I feel that our social history is safe in John’s hands because he loves it, he absolutely loves it. He is eccentric about it, he sees the tiny little details that we choose to forget but when we remember years later we laugh because it is part of our culture,” she said.

John thanked everyone who was involved in the book. He said it makes him proud that the research, writing, printing, publishing, launching, sales ‘are all being done by townies’.

The book is available in AllBooks, Portlaoise for €20 and all money raised will go to local St Vincent de Paul.