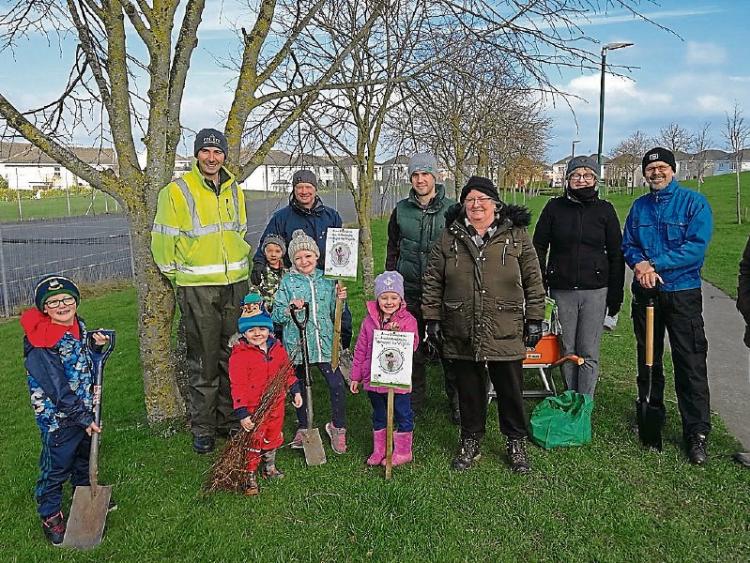 Hundreds of native Irish trees were planted in Kilminchy Village recently as part of a new green infrastructure masterplan to develop its 13-acre green spaces.

The first of several planned planting days took place adjacent to the shopping complex in the Portlaoise housing estate on a hilly area beside the little-used tennis courts.

A call had been put out on the Kilminchy Community closed Facebook page seeking volunteers to help. First on the scene was young resident Conall O’Neill with his dad Brian.

“I’m here to plant as many trees as I can today because the Polar Bears don’t have much ice left to live on and the trees will be great for cleaning the air and all the birds can build their nests in them too,” he said. 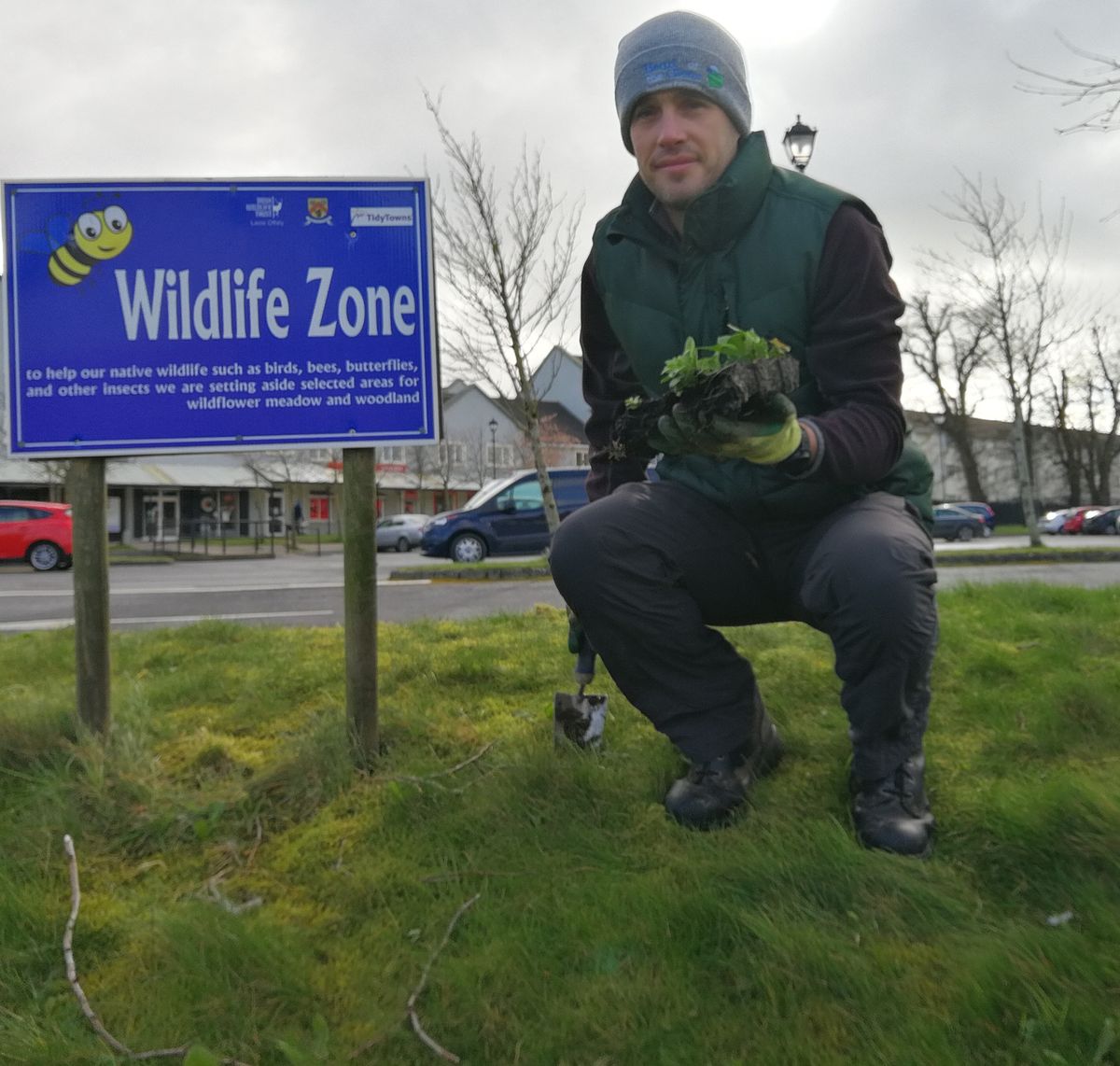 Chairperson of the Laois/Offaly Irish Wildlife Trust Brian Gaynor obtained the trees and is tasked with planning the immense variety of projects. He is currently working on finalising his reports based on two meetings which were held late last year with residents and Kilminchy Homeowners which manages the estate.

Mr Gaynor obtained the trees from a charity called Trees on the Land which is a cross-border initiative working to establish young native Irish trees across the Republic of Ireland and Northern Ireland and has planted over 860,000 trees on several thousand sites since 2013. 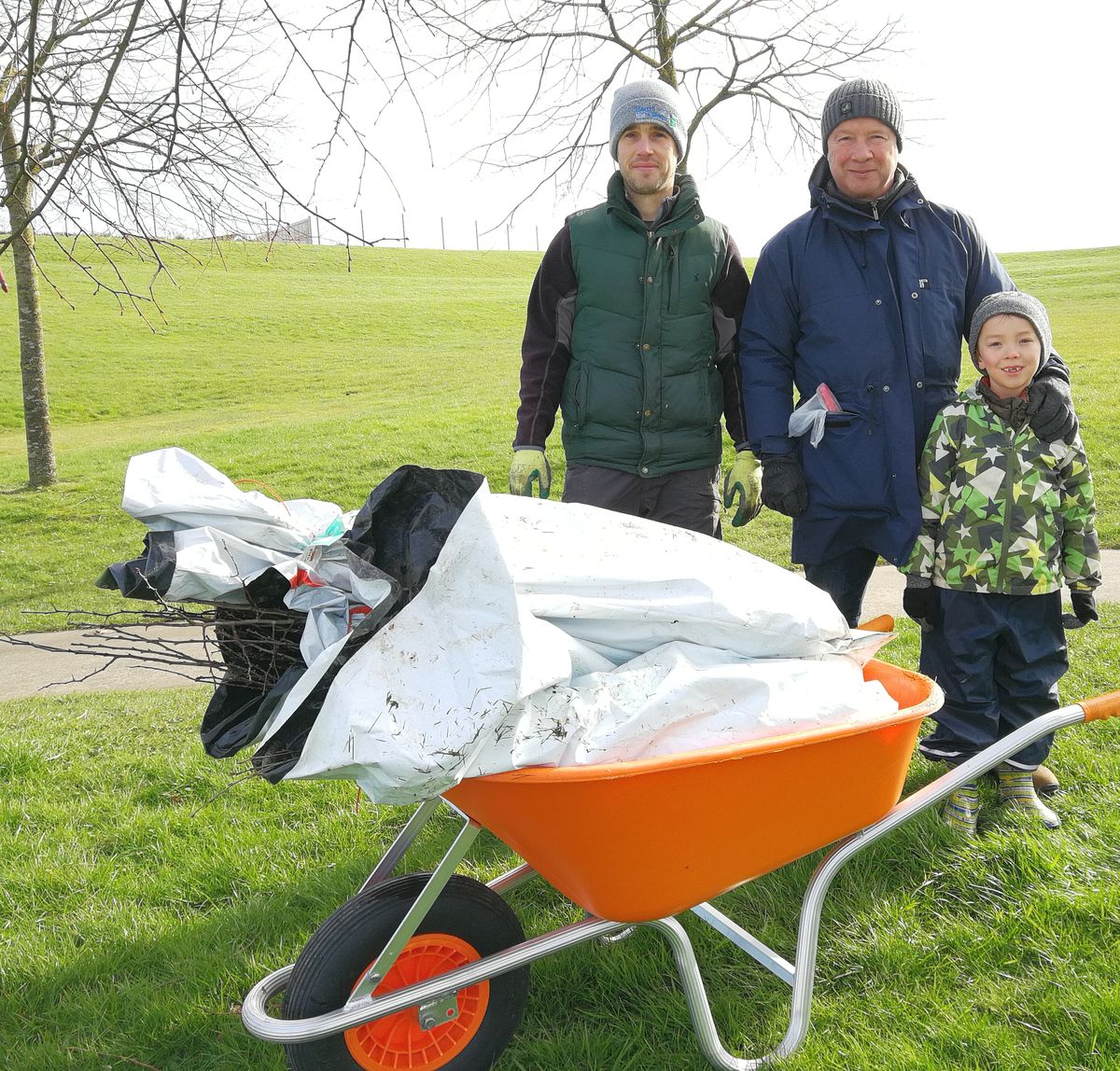 He said native trees are best to encourage our native wildlife.

“Other proposed plans for the public spaces include boardwalks around Kilminchy’s three lakes and a natural play-park. Also included are several pathways where residents can walk their dogs or jog if they want to. Seating areas where people can get out and meet each other or sit down with a book on a sunny day if they prefer are also on the cards.

“There are plans for woodlands, wildflowers meadows, sculptural art features, information signs and re-development the tennis courts into multi-use courts for a variety of sports and games. There is plenty of planning going on behind the scenes with residents,” he said. 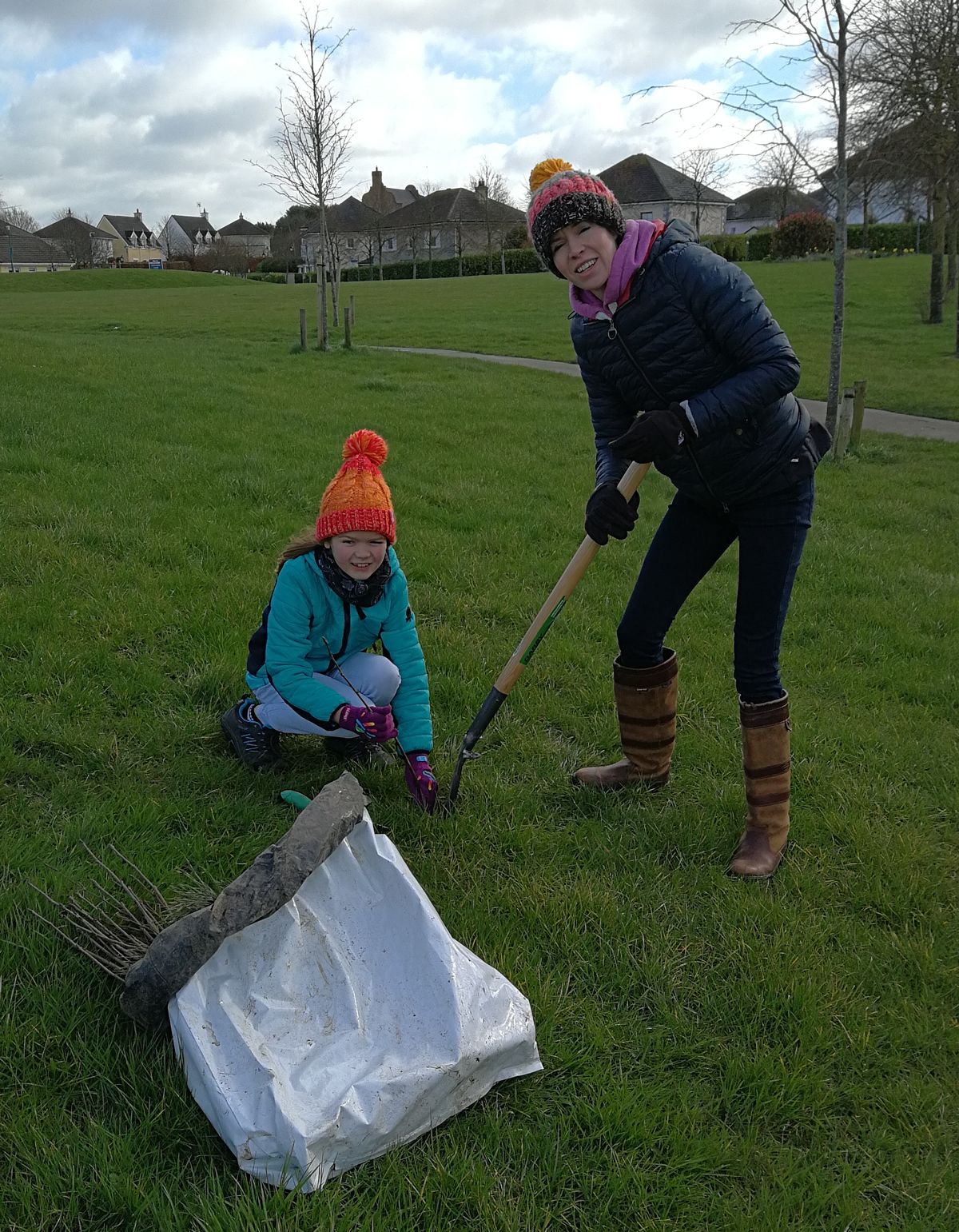 Murt Moriarty is the director and secretary of Kilminchy Homeowners.

“It is great to have arrived at the first day and starting to carry out our plans. We’re delighted to be here with around 1000 trees to plant and that’s only the start of it. We will be planting thousands more within our 13 acres of green spaces and trying to get more members of the community involved. It’s great to see the children here with their parents busy planting trees. 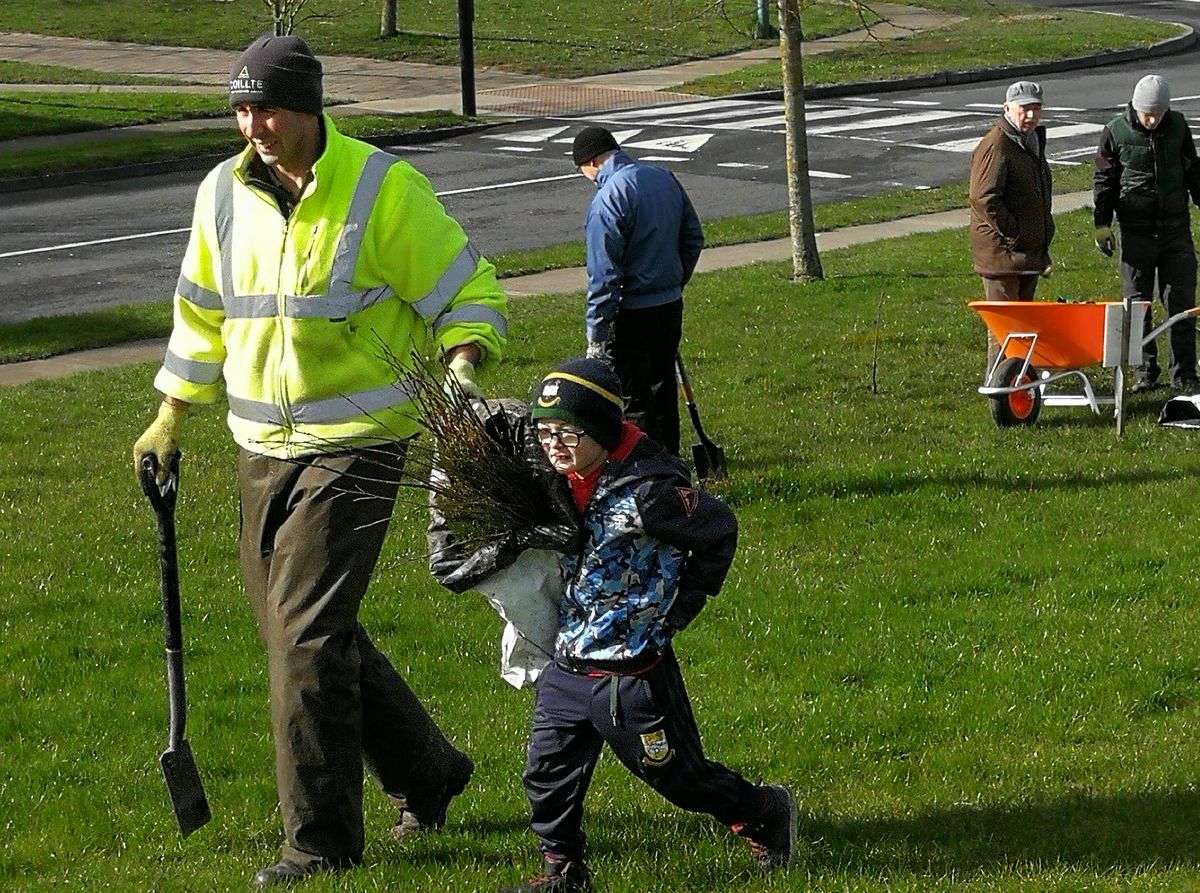 “There are reports of trees being cut down in several counties around the country during the nesting season which is ridiculous. Trees need to be planted not cut down. People are kicking up murder over it. If height is needed for this new 5G broadband then they should make the masts they need much taller than the trees and leave the trees alone.” he said.

The Kilminchy Homeowners annual general meeting (AGM) takes place in the Killeshin Hotel on Thursday, March 28 at 7.30pm and all residents of Kilminchy Village are encouraged to attend. For further information email info@kilminchyhomeowners.com. 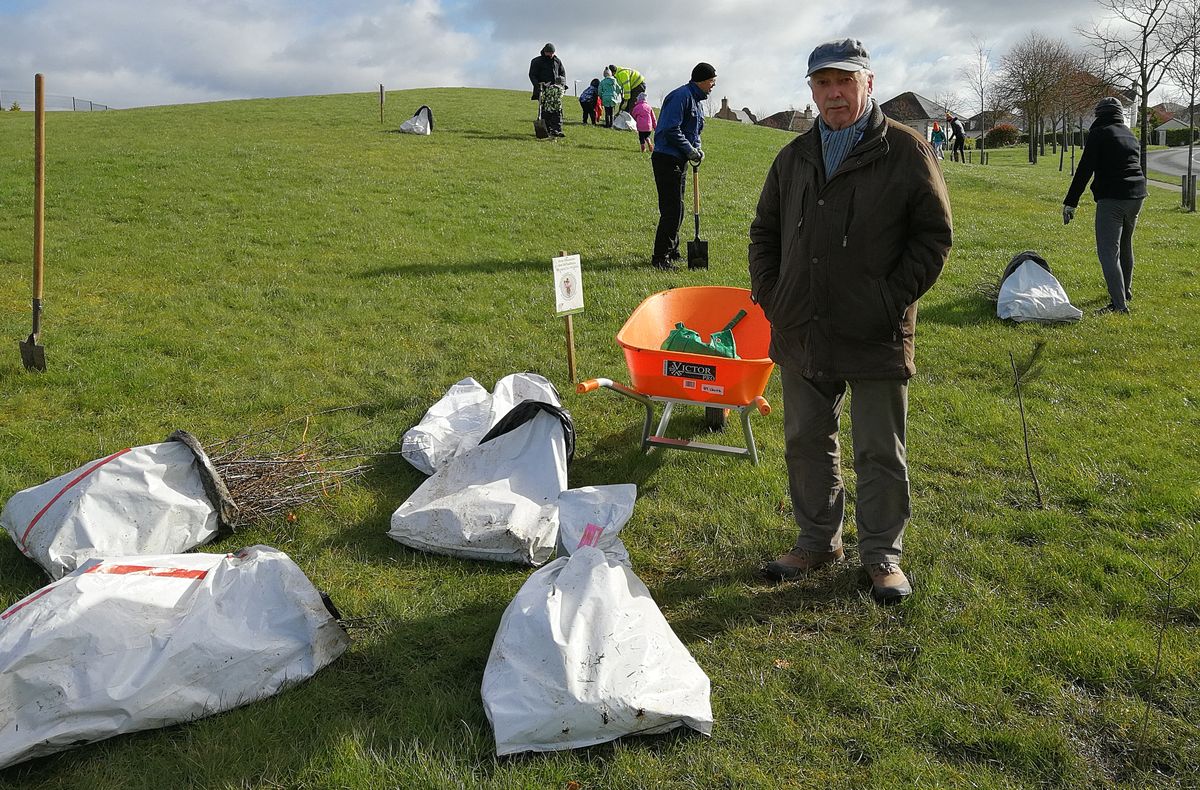