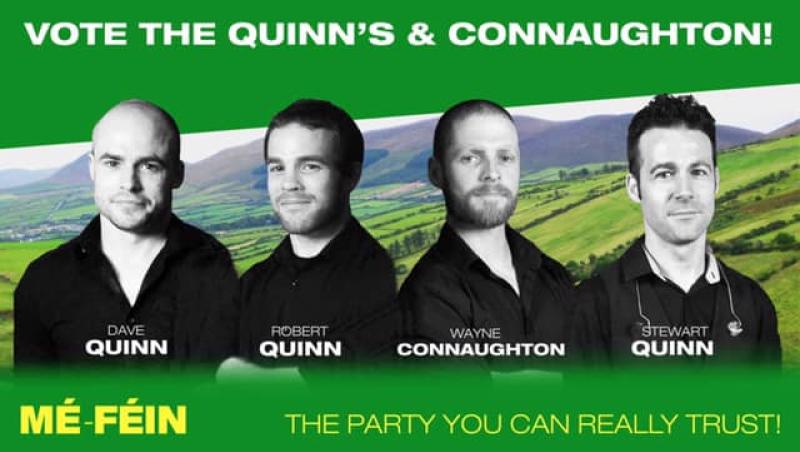 The 'voting card' for music band Transmitter in Laois

Laois voters might be disappointed today to discover they cannot actually vote for the Mé Féin party, after a brilliantly satirical online campaign by a popular Portlaoise band.

Transmitter, made up of David, Robert and Stewart Quinn and Wayne Connaughton launched their manifesto last week with promises that poked gentle fun at real issues affecting Portlaoise.

"Attract tourism to “The Town” by bringing back the Blue Bridge, repositioning it in Lower Main Street to give spectacular views of the derelict Convent, Shaw’s and County Hotel sites to visitors. Tourists will also have access to previously inaccessible angles to watch the digging up of Bridge Street and Tower Hill on a regular basis. This, we believe, will encourage inward investment on the Main Street, making it a more attractive place for the selling of CBD products" they suggested.

"Our candidates are “a voice for all”, openly welcoming people of all colours, creeds, religious background and ethnicity.
Just as long as they aren’t from England, or worse, The Pale.

We also wish to offer our support to the elderly of our local community in the form of mass followed by free tea and biscuits in County Hall every Wednesday from 10am to 11am.
This will form a central part of our commitment to spending your money better, looking after a generation who have paid their dues and whose work and savings were used as collateral by the banks to secure our economic futures. Sure, it’s the least we can do," Mé Féin aka Transmitter said.

"Our candidates pledge to continue marching with the community before standing on a 40 foot trailer in Lower Main Street for the next 5 years. We commit to shouting slogans and offering platitudes to large crowds of disaffected voters while patients and staff continue to suffer under government policy in our hospital"

"As part of a multi pronged effort to breathe new life into the centre of The Town we pledge to reopen by compulsory purchase order: The Portlaoise Arms, The Gem, Gerry Brown’s sweet shop, Tara Court, Bradbury’s, Ken Black’s, Murt Sullivan’s Wimpy Bar, the Bun Dunne’s cake shop, Burke’s Drapery, Airboran Travel, Paul Delaney’s mineral bar, the Prison Officers Club and Kelly’s Foundry.  We, at Mé Féin firmly believe the future is in the past." the lads went on to say.

They took a pop at Dublin supporters coming to the town this weekend.

"We, at Mé Féin have recently been made aware of a large influx of undesirables to the Main Street area of Portlaoise congregating with alcohol, causing blockages to traffic and frightening the elderly, using foul language, urinating in public and walking around as if they own the place.

Our traders have had enough of this disruption to their livelihoods and are no longer prepared to stand idly by while our judges and An Garda Siochana act as if nothing is happening just yards from their Courtrooms.

Upon election on May 24th we will invoke the 12th amendment to the 1547 Constitution of Maryborough to ban supporters of the Dublin GAA team and ingrates from the Pale gathering on Main Street in The Town.

If you agree with us, vótail Uimhir 1: Mé Féin - The Party You Can Really Trust."

They rounded off their campaign on election day with a copy of the Leinster Express all done for us next Tuesday, thanks lads for a hugely entertaining campaign! 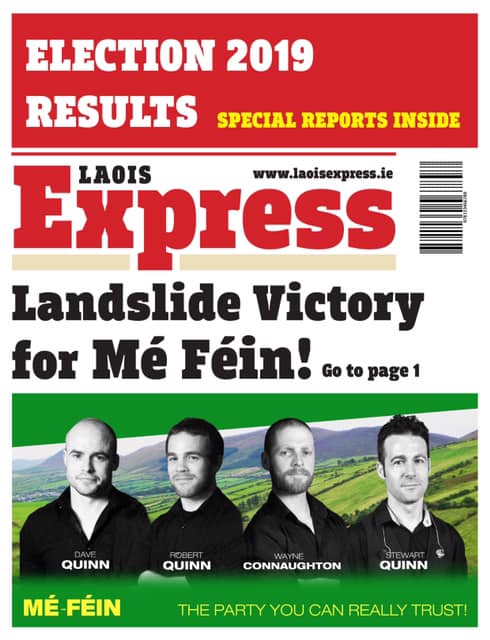 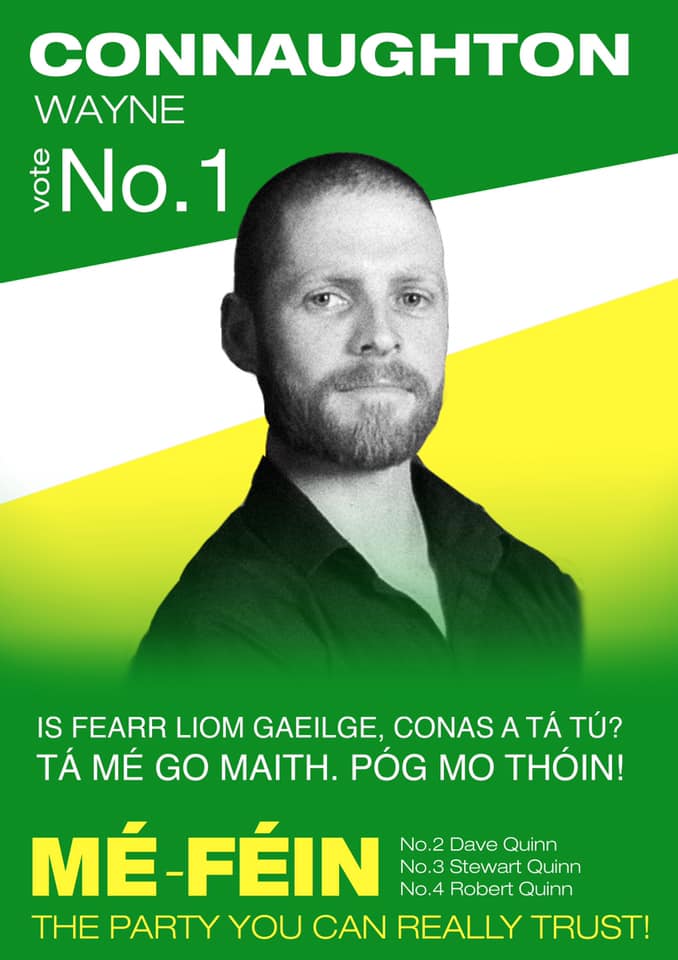 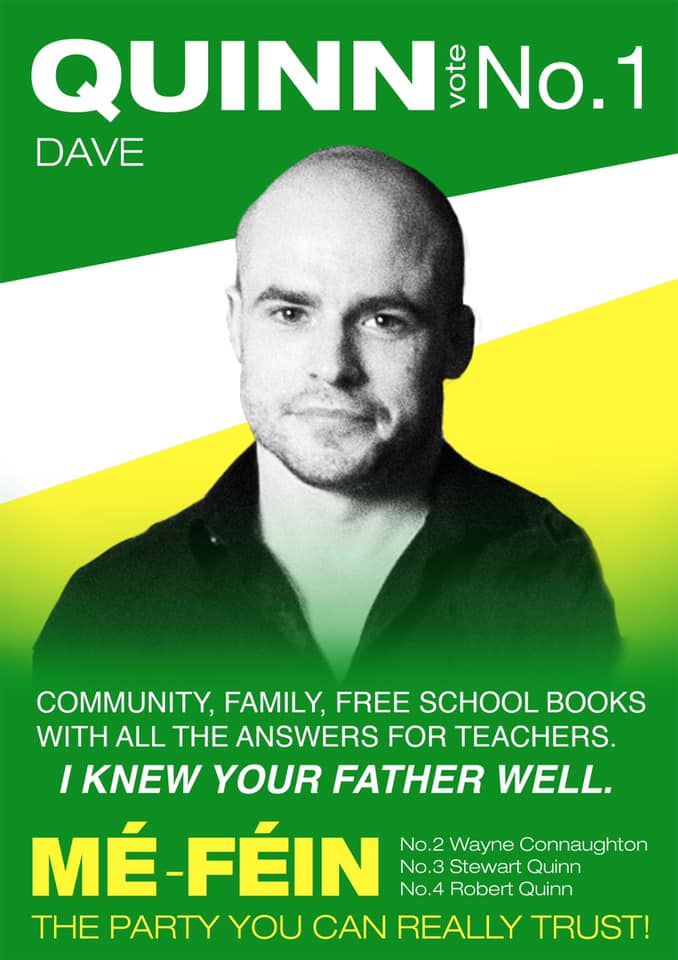 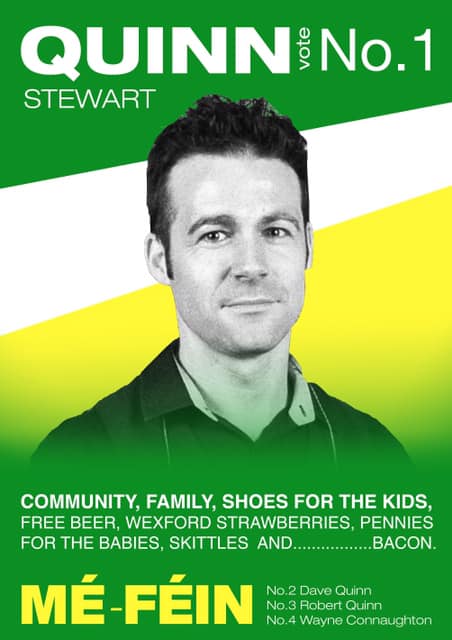 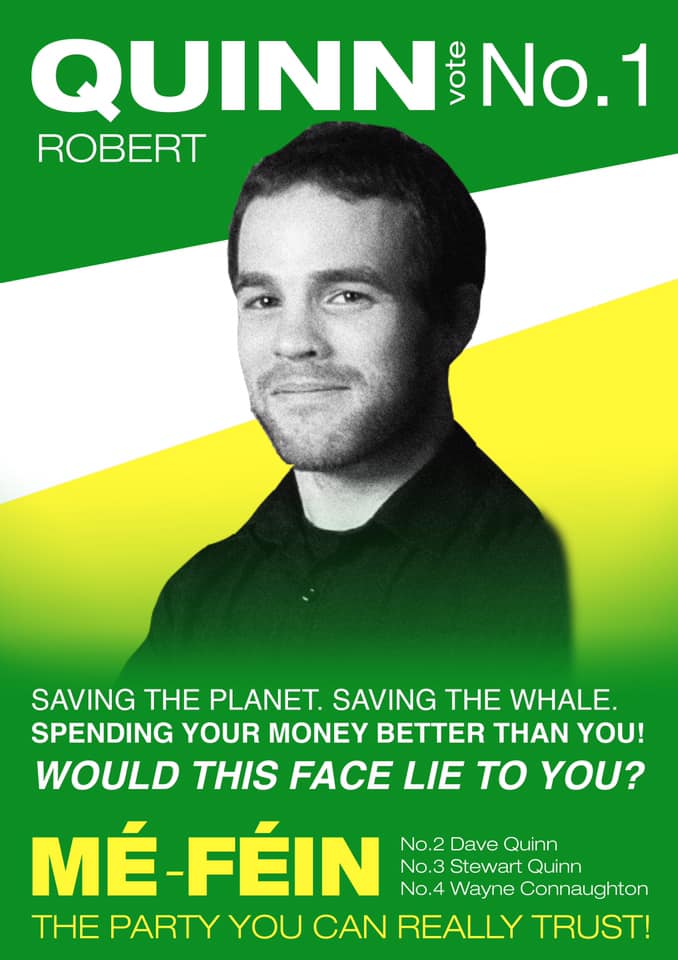