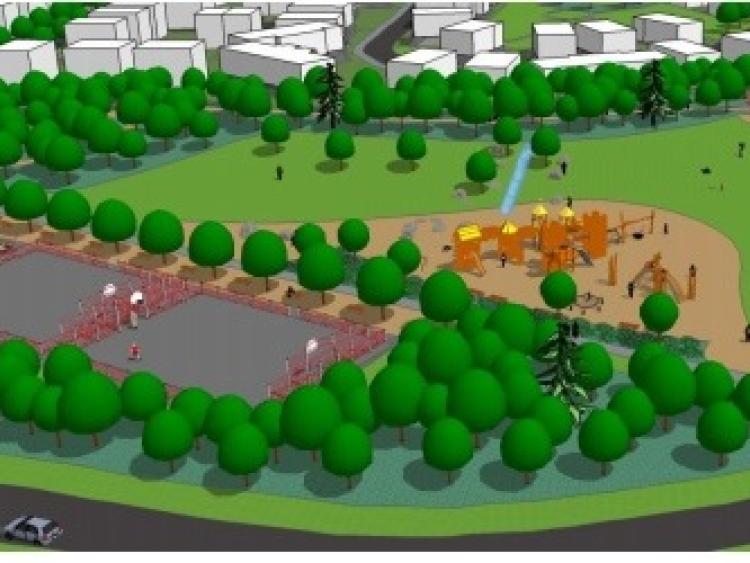 Central Park at the heart of green infrastructure plan

Residents of one of the biggest housing estate in Laois are to be asked to give the green light for a big enhancement project which could cost in the region of €580,000 over the next three years.

An EGM of the Kilminchy Homeowners takes place this week where residents and members will have the opportunity to approve the Kilminchy Community Plan that aims to deliver 'green infrastructure' in the estate.

The big-ticket item in the plan prepared by Green Pine Consultants is a new Central Park. The natural play park would feature an adventure woodland and trails in a green space around the existing tennis courts which would be revamped. The estimated cost would be €250,000.

A community events space is also earmarked for the Central Park costing up to €50,000

A Kilminicny Active Play Facilities are also earmarked for the Central Park. This would include multi-use ball courts and an outdoor gym trail. The cost is estimated at €105,000.

A Lakes Park Environmental Development is also planned. Spending of up to €85,000 is outlined for various projects to enhance the lakes and surrounding areas. A boardwalk, paths wildflower meadows, benches and a community woodland garden are all included.

Work is also planned for so-called 'green infrastructure' around the commercial centre. Tree planting, wildflower meadows, and woodland garden along the Bridle Walk are proposed.

Other ideas include pocket park and streetscape enhancements.

There is also mention of a walkway to connect Kilminchy to the two secondary schools via Rathevan.

The plan proposes that the work would be carried out in two phases. Work on all the key elements would begin in 2019 while some of the more substantial initiatives would be part of phase two 2020-22.

As for paying for the projects, the consultants say the potential funding sources include Laois County Council, Laois Partnership, National Lottery and the Irish Wildlife Trust. Private funds will also be sourced.

Kilminchy Estate is located off the town's Dublin Road. Work began on the estate in the late 1990s. It now consists of 720 houses, apartment buildings, a large commercial centre, retirement homes / villages, and a central green spine of lakes and park spaces.

Green Pine says the provision of Green Infrastructure in and around urban and residential areas is now widely recognised as contributing towards creating places where people want to live and work. They say it is an essential component of good planning for urban and rural areas and can deliver multiple benefits.

The consultants who drew up the new plan say that the original masterplan was for one overall development but this quickly changed, with the estate developed in different blocks by different developers.

Green Pine says the result is a large Estate that has developed relatively quickly over the last twenty years that is made up of a range of smaller individual residential developments of varying styles anchored around a central green spine.

The Kilminchy Homeowners EGM takes place in the Killeshin Hotel on Thursday, June 6 at 7.30 pm.