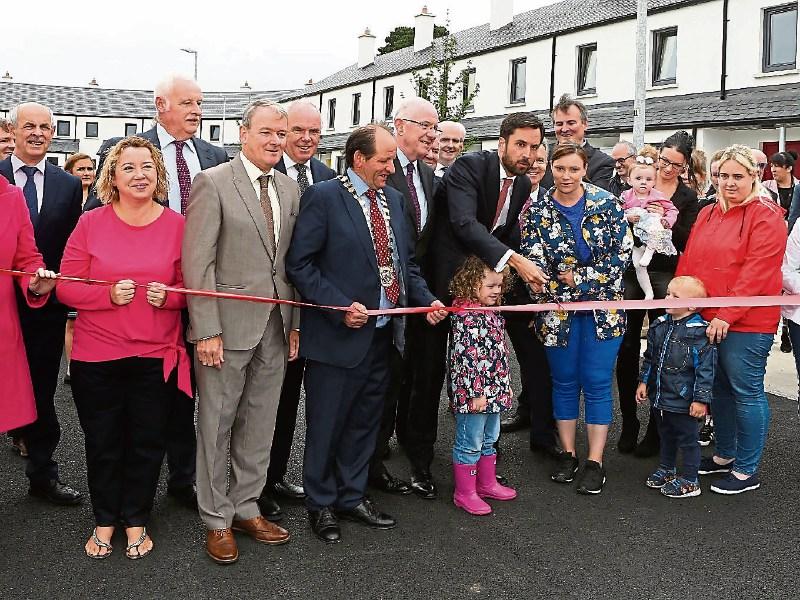 Minister for housing Eoghan Murphy at a new Portlaoise social housing estate, with Cllr Willie Aird on left, who has rejected signing off detail on a new Affordable Housing Scheme.

There is no Affordable Housing Scheme on offer to people needing a home in Laois, and the council owns no land to build such houses even if there was a scheme here.

However it has not stopped the Department of Housing asking councillors to approve paperwork for the scheme.

Last Monday at the May/June council meeting, Laois councillors refused to sign off details on the scheme to be used in the future.

Laois County Council chief John Mulholland said it was a “foible” by the Department of Housing that has caused difficulties in many other local authorities.

“We are asking you to approve regulations with nothing to offer with it. A scheme is yet to be designed by the Department. It's hollow, there is nothing behind it,” he said.

Housing officer, Michael Rainey said it is still cheaper to buy a secondhand house in Laois than for the council to build one, making the scheme as yet unworkable in the county. However, he said they are obliged to have a scheme ready to go if the market changes .

“Send it back. It doesn't apply to Laois. The council owns no land in Portlaoise or Portarlington or Abbeyleix so it's going nowhere,” he said. Most councillors agreed.

“We should look for a meeting with the Minister. This is totally irrelevant to us,” insisted Cllr Catherine Fitzgerald.

She said it was “the most stupid thing I've seen”.
“It's absolutely crazy. One of the biggest issues in this election was housing. We have people on their hands and knees begging for help. The fabric of our society is going to collapse,” she said.

The national scheme was stood down some years ago.  It offered first time buyers who are unable to afford a mortgage or qualify for a social house, a chance to buy a new house from a local authority at a cheaper price. The houses would be built on council land with no charge to the buyer for the site, only the construction.

They were asked to approve a draft Scheme of Priority for Affordable Dwelling Purchase Arrangements.   This stipulates how people are selected as eligible to buy an affordable house.

Eight or 10 local authorities have approved the paperwork the CEO John Mulholland said.

“We have to look at how we can influence government decisions on housing outside of Dublin,” he said.

Only one councillor wanted to approve the draft scheme, which is required to be done by legislation.

"Your rejecting it is optics. It's not achieving anything in having a scheme reintroduced," said Cllr Aidan Mullins. However he got no seconder and Cllr Aird's proposal to defer the vote until the September meeting was agreed.