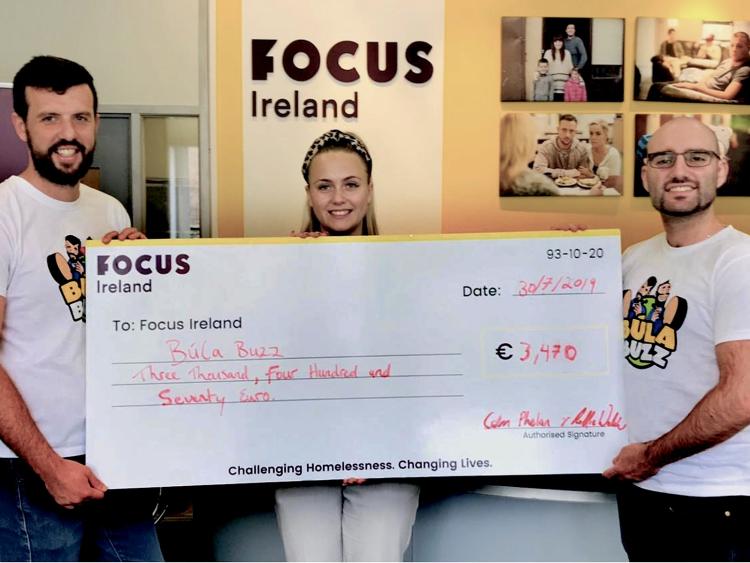 A Portlaoise musician who started an international bodhrán summer school has raised an amazing €3,740 for Focus Ireland by raffling off a specially made bodhrán.

Colm Phelan grew up playing music in Portlaoise, he studied Irish Music and Dance in the University of Limerick and went on to be a professional musician in the band Goitse.

His instrument of choice is the bodhrán and with the help of his friend Robbie Walsh he set up a hugely successful summer school.

The Búla Buzz International summer school attracts students of all ages from Ireland and oversees and is held in Clondalkin.

One of the features of the annual week long course is the opportunity to make a bodhrán under the guidance of US based Rob Faulkner. Rob is a renowned designer and constructor of the instrument.

He supplied an exact replica of a bodhrán he had made for one of the best known players in the world, John Joe Kelly of the band Flook.

This highly sought after bodhrán copy proved to be a successful raffle prize as it generated over €2,700 from online entries with a total of €3,740 being raised overall.

Colm told the Leinster Express he was delighted to be able to give back.

“We got the top bodhrán teachers in the world for the summer school and had a renowned bodhrán maker this year who made a one of a kind copy which we put up for raffle with other spot prizes. People entered the raffle from all over the world, the USA, Australia, Canada, there was such a huge interest in this specific Bodhran.

“With the school in Clondalkin and homelessness being one of the biggest problems in Dublin at the moment, we have seen it in Laois recently too, we thought Focus Ireland was an appropriate charity.

“This was the third year and over 70 people travelled from all over Ireland and the world to attend the school.

“You come away with lots of new music and new ideas.

“We decided to try and give back this year and that’s how the fundraiser started and we are thrilled over 150 people entered the raffle,” he said.

Watch the talented John Joe Kelly in action below.