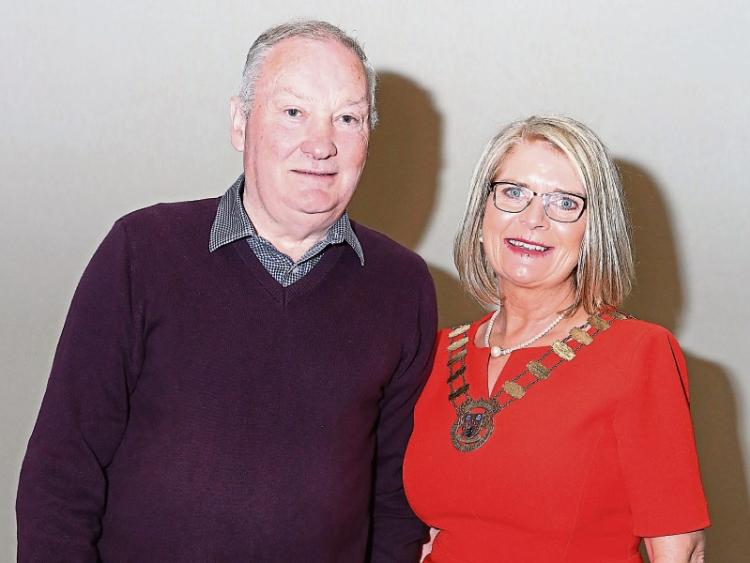 Portlaoise issues dominate the list of aims for the new Cathaoirleach of Laois County Council.

Cllr Catherine Fitzgerald, was elected to the Chair for the second time in five years at the recent Laois County Council, taking over from Cllr Willie Aird.

The Fianna Fáil councillor is also keen to tackle housing and improve broadband throughout the county.

“I am humbled to be elected to this prestigious position. I am aware of the huge responsibilities that come with it, and committed to providing leadership.

“We have been living in extraordinary times, and I want to acknowledge the effort of the community and frontline workers, and those who lost loved ones. Our county has shown resilience in the face of adversity, and we will ensure all that can be done will be done for our citizens of Laois,” she said.

Cllr Willie Aird, of Fine Gael, is the outgoing Cathaorleach.

“Little did I know when taking this position it would turn out to be during a global event. In this tsunami the council had to stay going. It was difficult to change our ways but I can guarantee that that way forward will be meeting by teleconferences, saving in emissions and working from home. Out of Covid we have learned things like this,” he said.

The election was not without controversy, as Sinn Féin's Cllr Aidan Mullins stirred up anger for labelling some councillors voting for her as “real” or “provisional” Fine Gael and Fianna Fáil.

He had proposed his colleague Cllr Caroline Dwane Stanley, but with five votes for her and 14 from mostly Fine Gael and Fianna Fail members for Cllr Fitzgerald, it was always going to be a fait accomplis.

“I look forward to the day when Laois County Council ends this practice of exclusion,” he said, calling himself a “dissident”.

“I resent that very much, I’m a Fianna Fáil person, I’m not a provisional anything, that’s hurtful,” he said.

“We have been excluded from all positions. There have been opportunities to take the leap of faith and roll our a rotation system equal to every party and none. I look forward to the day it will happen,” she said.Fine Gael Cllr Conor Bergin was elected leas cathaoirleach, by the same 14 to 5 majority with Labour’s Cllr Noel Tuohy the opposing candidate.