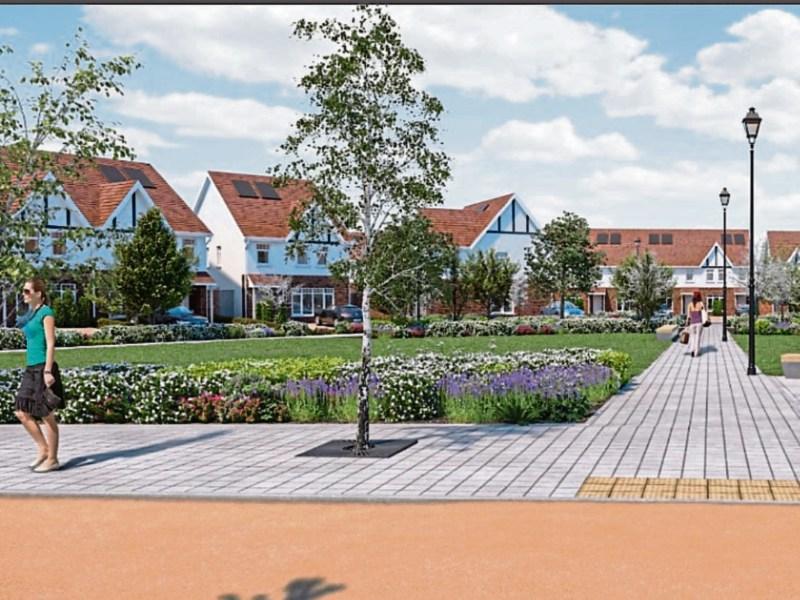 An artist's image of the planned extension to Foxburrow estate in Portlaoise.

A homeowner of Foxburrow, one of the Portlaoise estates to be expanded in an Strategic Housing Development planning application in Laois, says the new fast-tracked planning method is “very unfair”.

“We only get five weeks to give submissions, it looks like a system ransacked by developers,” the resident said.

Foxburrow was only part finished in 2008, with 24 houses and two apartment blocks, and its access road is through Chantiere Gate estate on the Block Road.

“They want to bring three estates together, ours, Grenville and Chantiere Gate. You will have another 250 or 300 cars coming out of the entrance to Chantiere Gate. Schoolgoing traffic already cuts through Beladd, it will start cutting through Grenville to come out by Chantiere Gate. We always hoped it would be finished, but done properly. This plan has gone from building 90 homes to 155, and a lot are two bedroom, one bedroom and that’s not very family friendly,” he said.

The resident said that traffic in the mornings is already “madness”.

“The Block Road is well named, it is blocked with traffic every school morning. It has the hospital entrance, the Cuisle Centre, the Kolbe school, it was never designed for this type of traffic.

“And there are plans to put another school in Aughnaharna. We are worried about road safety and construction traffic. Our town is being strangled,” he said.

The resident also says he and others do not want pedestrian walkways between the estates.

“There are already gangs of young people starting to walk through, let alone putting in walkway. They had to close one in Rathevan over anti-social behaviour,” he said.

The sewerage system is already overloaded he believes.

“Since Foxburrow was built, there has been a waft of sewage at the bottom of Chantiere Gate,” he said.

The plan is one of two proposed in Portlaoise under the fast-tracked SHD housing scheme, which puts An Bord Pleanála in charge of planning decisions instead of each local authority in an attempt to provide housing faster in Ireland.

Thomas Kelly & Sons Group, builders of Conniberry Estate among others, is seeking permission for 262 units, a creche and a shop in an extension to Rathevan estate, next to Kilminchy housing estate which is the biggest in Laois.

Public submissions were accepted on both until July 28. The local authority was to receive ABP’s report in mid August and will send back their advice on it, with ABP making its final decisions by mid October. The only way to appeal is a judicial review in court.