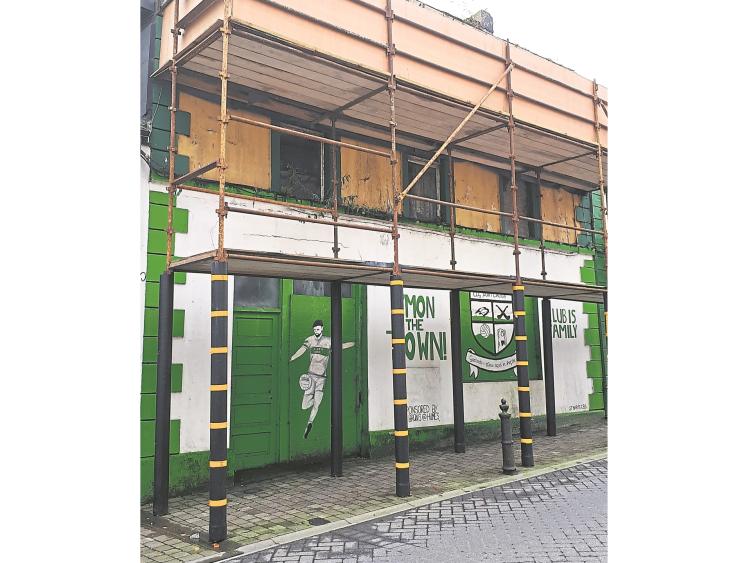 The derelict former County Hotel in Portlaoise is continuing to cause a loss of trade to the business next door a councillor has said.

The boarded up building on lower Main Street was bought by Laois County Council with a double edged plan to solve dereliction on the street while providing town centre council homes.

It is to be converted to 11 apartments by Cluid Housing Association but work will not start until 2021.

In the meantime, a scaffolded walkway erected a year ago covers the front of the building to protect pedestrians from falling debris from its broken roof.

Cllr Caroline Dwane Stanley has for the second time passed on complaints to the council on behalf of the photography business next door.

Speaking at the September meeting, she said it is “badly affected” by the scaffolding which blocks the approaching view of their shopfront.

“Have you engaged with the owner of the property that’s badly affected?” she asked the director for housing Joe Delaney.

Mr Delaney gave an update on plans for the building.

“I sympathise with the adjoining owner. We have a report from Cluid on the condition of the building. It is in poor condition. It has protected status.

“Cluid are our partners in this as it is considered better to have an approved housing body as management for apartments. If we can get the support of Cluid and funding, we can go further into the building, as soon as possible hopefully,” Mr Delaney said.

The apartments are to be tenanted by single people. Clúid Housing Association has applied for Capital Assistance Scheme funding from the Department of Housing to pay for the works.