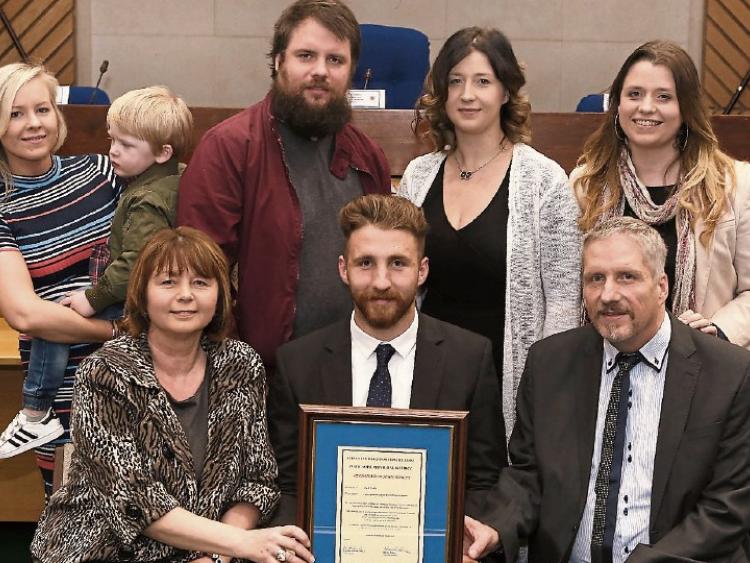 The Tuohy clan with Zach at home in Portlaoise after he was honoured by Laois County Council in 2016.

There will be big excitement in the Tuohy household and among the local GAA community in Portlaoise this weekend when former Laois and Portlaoise Gaelic Football player takes the field in the blue ribband event of Australian sport.

Zach Tuohy will tog out with his club Geelong Cats in the AFL Grand Final. Aussie Rules is the most popular sport Down Under and millions will tune in to see Zach and his teammates take on Richmond at the GABBA in Brisbane.

Zach's dad and mum, Noel and Marie, were up in the early hours of the morning at home in Portlaoise last weekend to see their son play in the semi-final.

Noel took some quick time out to speak with the Leinster Express after attending Laois County Council this week in his capacity as a councilor for Portlaoise. He said the family is delighted and proud.

“The final is on Saturday morning so we are hoping for the best. It is what he set out to achieve. He is in a final now. It is 50/50 now which I would take any day of the week.

“We are very proud of him. He is a hardworking lad who never forgot his roots. He still loves Portlaoise. We are hoping he comes back pretty soon, but time will tell.

“I would have been there (but for Covid-19). We went ten years in a row but it was too difficult this time,” said Noel.
Zach, now aged 30, played with Portlaoise at all levels until he left for Australia in 2010.

He was drafted by Carlton in 2010 and has since played more than 200 games in the AFL. He joined the great Jim Stynes as only the second player to reach the milestone this year.

Before departing Ireland, he played as a minor for Laois winning a Leinster medal in 2007. He has won numerous medals with Portlaoise including some long-distance county final cameos for The Town during their nine in a row in the Laois GAA senior football championship.

Read also:  ZACH ON THE CUSP OF GLORY