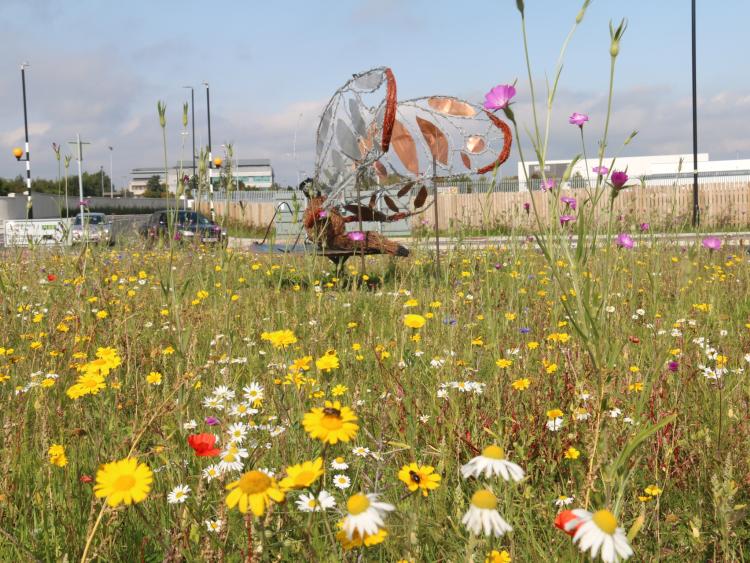 Portlaoise is set to become a shining example of a town living with nature, as a new project is revealed to plant another 10,000 trees.
Already Portlaoise Tidy Towns are working hard on their ‘town in a garden’ concept, having planted another 4,000 spring bulbs recently, and planting biodiversity meadows and 100 fruit trees in housing estates, on roadsides and roundabouts. 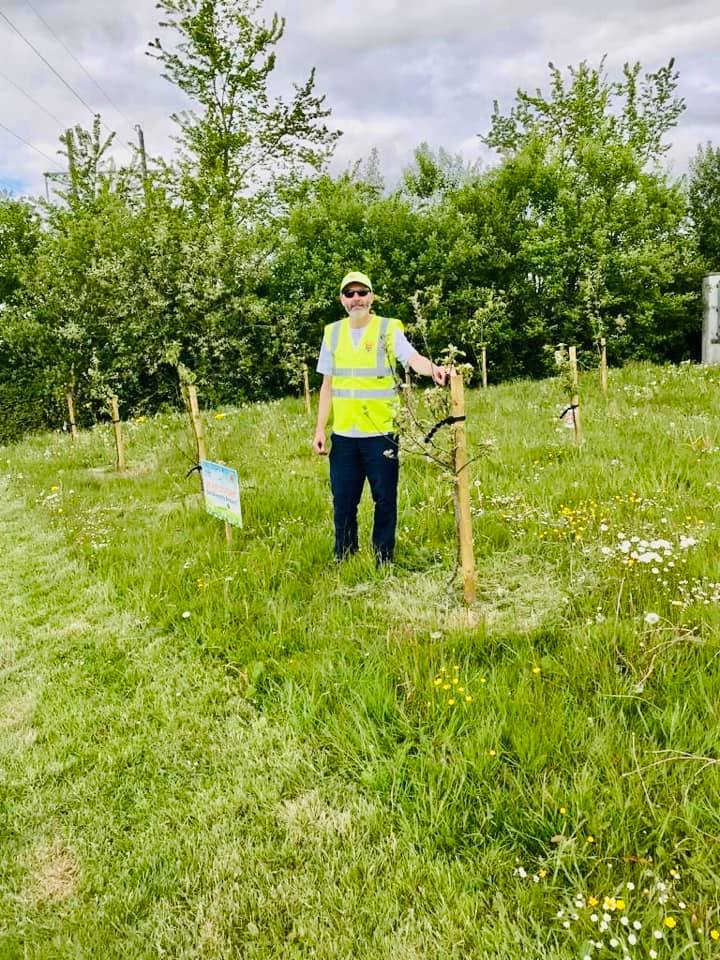 Giving an update at the November meeting of Portlaoise Municipal District, landscaping consultant Brian Gaynor hinted at a new project to plant the trees.
“We could smash it out of the park. We could develop a very significant project here and showcase the town,” he said.
The project is at the early stage of exploring potential sites with any interested landowners he said. The trees will include hedgerows.
“We hope to plant a mix of hedging and pockets of woodland across the town. We will be looking at the availability of grants, he said.

Laois GAA is also working with Portlaoise Tidy town to add biodiversity to the county grounds at O’Moore Park.
“Laois GAA are working on a green stadium initiative. This covers everything from water and waste, to sustainable energy use, biodiversity meadows, murals, trees and hedgerows.
“It’s an example for other county grounds and GAA grounds around the country,” said the consultant who is also a volunteer with the Trees on The Land initiative, and the Laois Offaly Wildlife Trust.

Work is also starting at the rugby grounds in Portlaoise at Togher he said, by way of virtual consultations. Portlaoise GAA Club has also planted trees he said, mainly as a windbreaker for pitches.
The Bord na Móna owned Cúl na Móna bog at Togher also has major potential he said.
“This is two hectares right on the edge of Portlaoise. We are not sure what the plans are for it, but Lough Boora in Offaly is half an hour away from Tullamore but it gets 100,000 visitors a year. We have that potential on the edge of Portlaoise.”

He said that greening the town has many benefits.
“It’s about using nature to deliver multiple benefits, like water quality, quality of life, enhancing the visual image, and biodiversity. The brand of town in a garden in itself is desirable for businesses, it attracts people to want to live in it. It is shown to increase property values and tourism. Access to green spaces has proven health benefits and with Covid it is even more important,” Mr Gaynor said.

“Big grass greens are not quality spaces, woodland and meadows with paths through them are better. Tree planting is a big part of being a low carbon town. If you have a lot of hard standing space, during heavy rain it all goes into drains and watercourses, but by using biospace, water is naturally filtered and treated on site,” the landscaper said.
“There is potential for a ring of green infrastructure around Portlaoise, with spokes into other towns,” Mr Gaynor added.

His presentation was made to Portlaoise councillors, with Gerry Browne, chairperson Portlaoise Tidy Towns also at the meeting. Mr Browne thanked the council for their support, as well as local schools including Portlaoise College, and Scoil Chríost Rí.

Several councillors recalled the great work of the late Cllr Jerry Lodge and Cllr Kathleen O’Brien who both volunteered in Portlaoise tidy towns for many years.
“They would be looking down today and saying this is where we want Portlaoise to go. Tidy towns used to be about being clean and tidy, now they are about biodiversity. Portlaoise have taken it all into consideration and you’re a credit to the county,” said Cllr John Joe Fennelly.

“I’m a long time around and I’m proud of Portlaoise at the moment. Once there was no park. You can see that bees are on decline, we’ve lost birds like the curlew, we are working one to ensure the bee population doesn’t leave us, we are learning. There is more to life than concrete,” said Cllr Willie Aird.

The council’s Town Manager Simon Walton thanked Brian Gaynor for his work.
“The objective is gold in the Tidy Towns, we are all working towards that, I acknowledge the assistance the group has given us in the council, you are a credit,” he said.

Below: a roadside meadow and a newly planted 'green wall' on the new Portlaoise Southern Circular route extension. 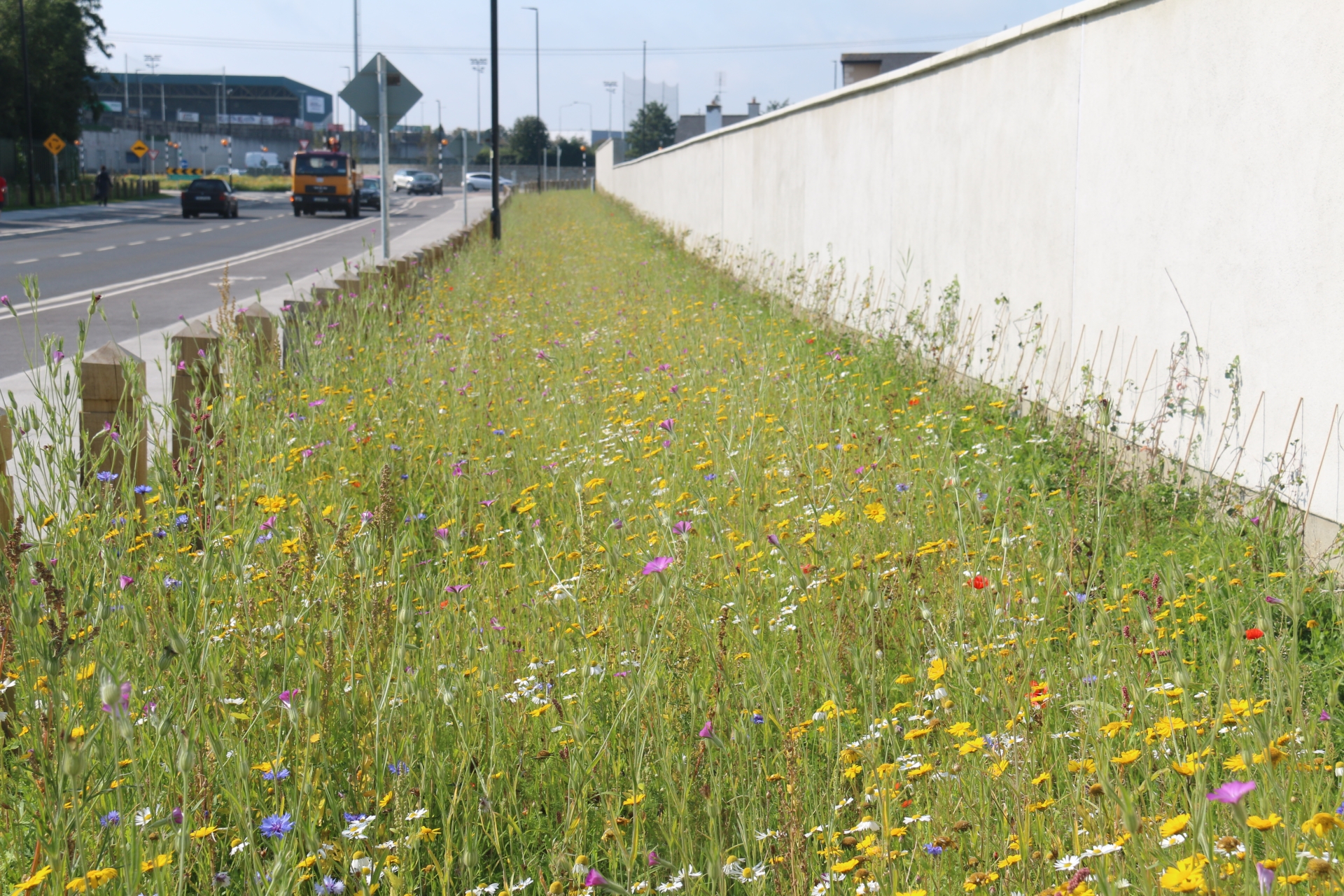