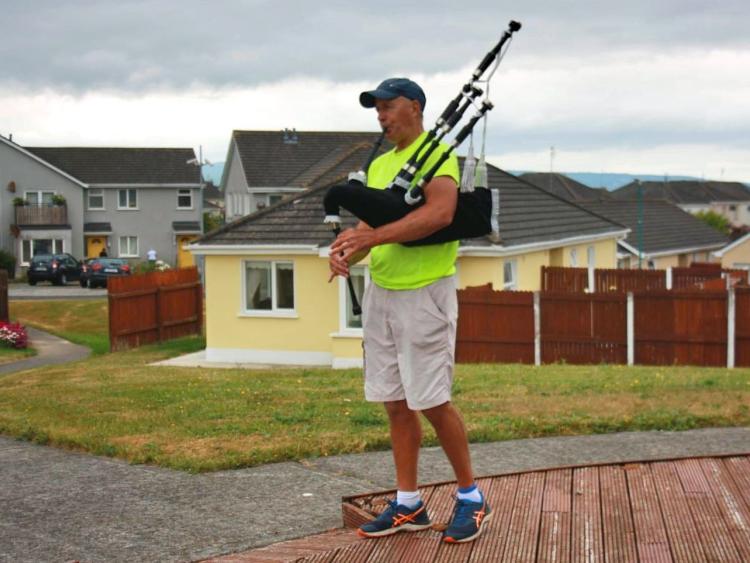 A pensioner in a retirement village in Laois has gone above and beyond during the whole time of Covid-19 to bring cheer to his neighbours.
From birthday bagpipe tunes to Christmas gifts, retired soldier Stephen O’Toole has kept community spirits high at a truly difficult time for the older residents living in Kilminchy retirement village in Portlaoise.

Last March when the first lockdown began, Stephen, a native of Tipperary, had only just retired. Living on his own he had decided to fill his time by learning the bagpipes, which he had played as a child. He bought a set and started practicing.

“The first day I played was St Patrick’s day when the parades were cancelled. I walked around the houses and they all came to their doors to wave to each other. At that time everyone was cocooning and not going outside the door,” he told the Leinster Express.

“After that people started asking me to play for birthdays, so I started learning more tunes. and everyone would come out and sing happy birthday from their doors,” said Stephen.

Below: Stephen's neighbour Ursula getting a Happy Birthday tune. 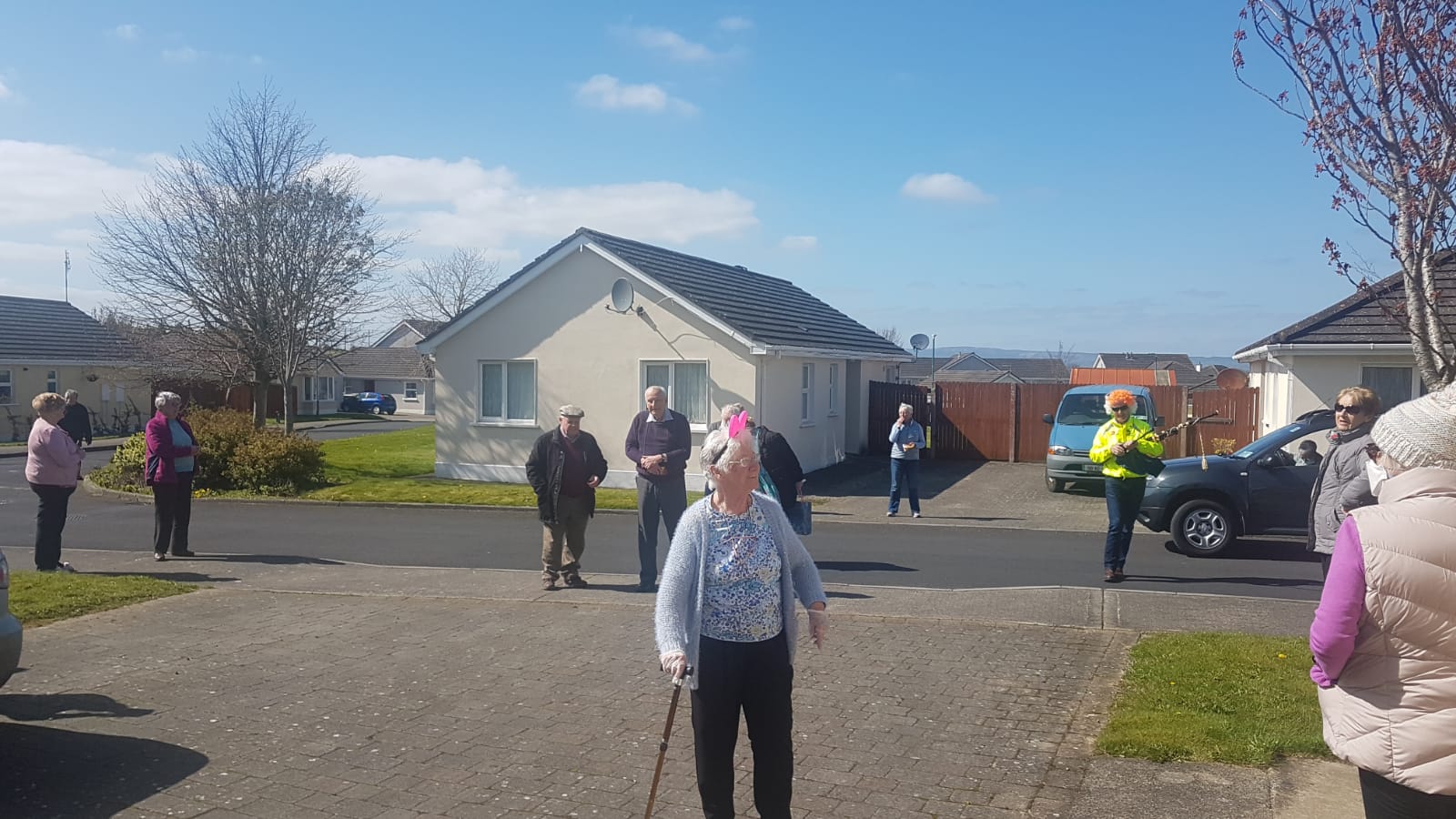 Never a man to do nothing, his summer project was to repaint an old bike in the Tipp blue and gold, and offer it up for sale as a garden display full of flowers, in aid of Laois Hospice.

All the neighbours instead held a bucket collection, bought the bike and kindly allowed Stephen to keep it on display outside his own house.

Below: the cheque donation to Laois Hospice 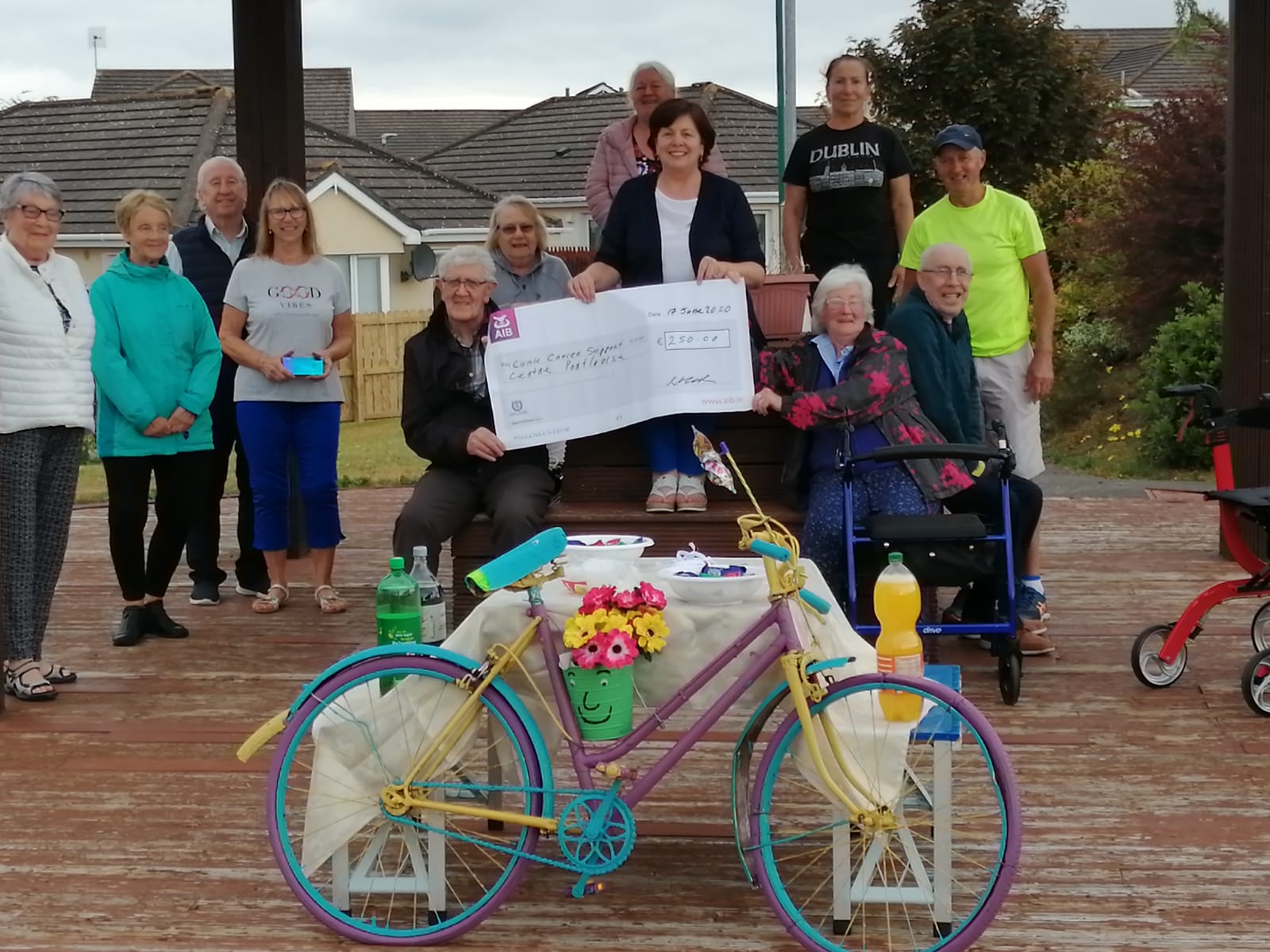 Next came Christmas and Stephen made his most heartwarming gesture yet. His neighbour Paddy Kennedy who had contacted us to publicly thank Stephen explained what he did.

“On Christmas Eve he got a friend to dress as Santa and his nieces and nephews came up and helped as they went around to every door, playing Christmas tunes on the bagpipes and giving everyone a tin of biscuits, all out of his own pocket,” said Paddy.

There are about 70 houses and apartments in the retirement village making it a generous gesture by Stephen.

“Then on New Year’s Eve at midnight he came out and played in the new year. Thanks to a neighbouring estate we enjoyed beautiful fireworks.
“He really went above and beyond for us all year round. One lady he played for was turning 80, she was delighted that day, all the neighbours came out to wish her happy birthday, she lived on her own. She has died since,” Paddy said.

Paddy who lives with his wife Carmel said it has done a lot to make the year easier for everyone.
“Only for that we would have been so bored all year. We both have health issues and my wife had an operation right before Christmas. We have a great community here, we also have Betty Lalor who is brilliant, she looks after everyone. Anybody who is sick she does their shopping, a pensioner herself. It has been a hard year. We lost a few people during it, thankfully none from Covid.

“We just wanted to say thank you to Stephen, and maybe other areas might copy his example,” Paddy said.

Stephen spent 40 years in the army, then worked in healthcare before retiring. He has also volunteered for many years with Laois Special Olympics and Irish Water Safety.

He is modest about his neighbourly efforts.
“It was nothing, I’m healthy, touch wood and I like to help out. New Year’s Eve was lovely, my daughter Orla O’Toole came up, and I just went out for the five minutes to play. I think it meant a lot to people. My neighbour who is in her 80’s even came out to dance on the road. It was emotional. There were a few tears that night,” Stephen said.

“I just like to keep busy. It gives me a boost too. There are a lot of people doing good out there and we just don’t know about them. It’s a lovely community here, they should build more like it in Laois,” he said.

Stephen thanked his nephews Lorcan and Liam McBride from Portlaoise and nieces Allanah and Isabelle O’Toole for helping Santa deliver his gifts, and daughter Orla for helping organise the event. 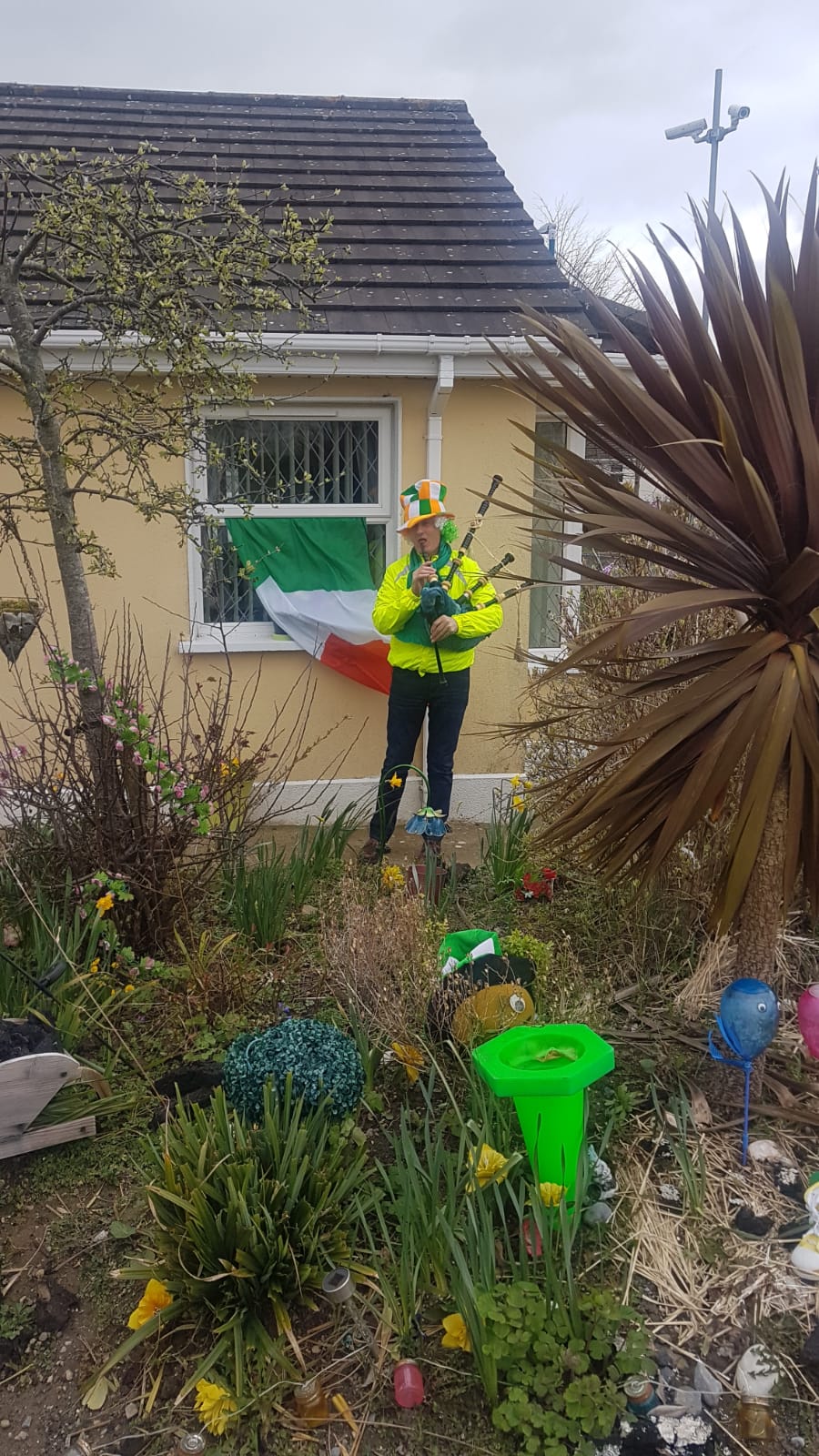