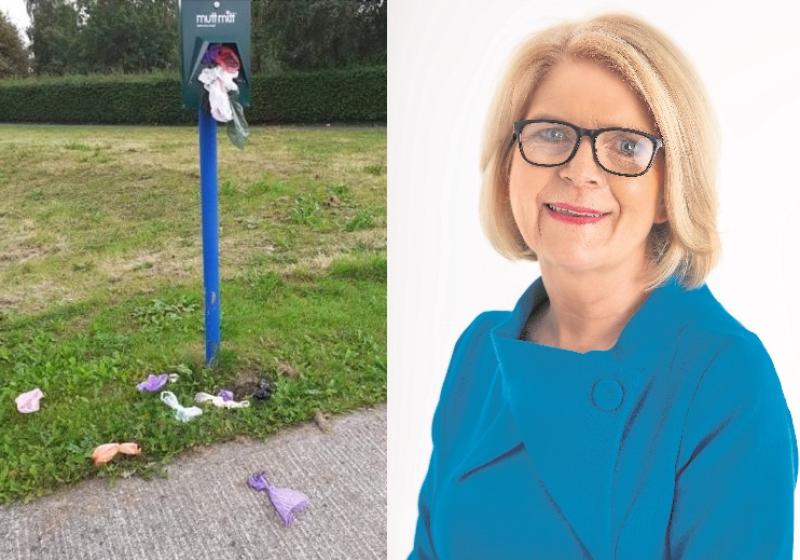 The council has bought and installed 68 of the dispensers across the county, offering free strong plastic bags to dog walkers.

However a Portlaoise councillor says that either the dispensers get bins fitted underneath, or they should be removed altogether.

Cllr Catherine Fitzgerald said the situation is “disgusting” in Portlaoise. She provided the above photo taken by a resident on the Borris Road in Portlaoise, a popular walking route.

“I don't think we are looking at the reality of what is happening on the ground, literally. On the Borris road a resident told me she is picking up over 30 bags off the ground every week, as dog owners leave their bags there. It's much worse than it ever was.

She has tabled a motion to the September meeting of Portlaoise Municipal District, asking Laois County Council to "install dog foul bins underneath the Mutt Mitt bags or else remove altogether".

The environment officer Adrian Barrett in reply explained that the council is running a Dog Anti-Fouling campaign across Laois. He said the Mutt Mitt dispensers are provided in partnership with local Tidy Towns groups whose volunteers keep them stocked with the bags.

"We need the bins or else take them out. The responsibility is with dog owners, this is absolutely filthy. People are begging me to get dog foul bins. It's not fair on people tidying up, it's disgusting," Cllr Fitzgerald said.

Her motion is supported by Cllr John Joe Fennelly, from Abbeyleix who said that their Tidy Towns group had to remove new bins after locals began filling them with household waste, which is illegal.

"We have Mutt Mitt dispensers and they think that's where they put the dirty bags," he added.

Cllr Noel Tuohy from Portlaoise meanwhile said that his biggest fear is unmuzzled dangerous dogs, suggesting a pilot programme of bins on the Borris Road.