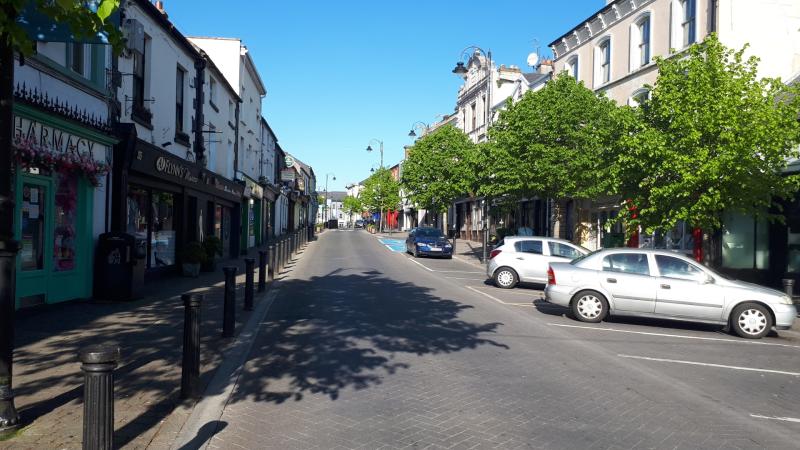 Main St Portlaoise on the May Bank Holiday Monday in 2020.

Portlaoise has emerged as cleanest of the 40 areas surveyed nationwide in the first post-lockdown survey by Irish Business Against Litter of towns and cities around Ireland.

Portlaoise, which was at the very foot of the table back in 2010, topped the rankings. The an achievement was praised by An Taisce as the result of “years of concerted effort and steady improvement“.

It finished ahead of Leixlip and past winner Ennis. Notable improvement was seen in Tipperary town and in Carlow and Longford, which were both ‘Cleaner than European Norms’.

The judges made the following assessment.

"Portlaoise has built on years of concerted effort and steady improvement to top the IBAL table for the first time. With so many top-ranking sites, there are a few which deserve a special mention. Fitzmaurice Place - formerly an amphitheatre - has now been transformed into a beautiful green space with lovely seating, grass area and planting.

"The Main Street and Church Street were both excellent in terms of streetscape and litter. Clearly a careful eye is kept on the Derelict Sites on Pepper Lane – while they presented poorly, there was no litter directly associated with them. The moderately littered area to the rear of the library was the only blemish in the town," it said.

The following is a breakdown of the report published by IBAL on Portlaoise.

Timahoe road - A grade: A clean and tidy impression was created along this route with road surface, markings and signage in good order. This high standard was maintained for almost all of the remaining sites surveyed in Portlaoise.

Ballydavis road - A grade: There was a virtual absence of litter along this well presented route. Road surface, markings and signage were in good order.

Church Street A grade: A clean and tidy impression was created along Church Street. The road surface and markings were particularly fresh and the paving area was enhanced by some colourful planting.

Portlaoise Train Station- outside A grade: This site got the top litter grade, but only just. Perhaps the installation of litter awareness notices could create an awareness of the same?

Portlaoise Train Station – inside A grade: As with the Exterior of the Train Station, this too just reached the top litter grade. There was a virtual absence of litter within the interior and the station platforms. Cigarette butts were most obvious.

Fitzmaurice Place green space A grade: What a transformation compared to a few years ago. This is now a beautifully laid out park space with abundant planting – it was a lovely environment and excellent with regard to litter.

Miscellaneous Site, rear of Library: Grade B. There was a small improvement from IBAL 2020 visit but it still presents poorly - heavily weeded and somewhat littered.

The latest survey found litter in the main cities has worsened to levels not seen in ten years. The number of areas deemed clean by An Taisce, who carry out the survey on behalf of IBAL, rose from 17 to 23. In all, 68% of towns showed an improvement on last year.

IBAL’s Conor Horgan commented: “With local authority cleaning schedules normalising again and volunteer groups re-engaged in clean-ups across the country, our towns are almost as clean as 2 years ago. This is still some way short of where they were in 2014, however.”

"Now that we have emerged from lockdown, we cannot use it as an excuse for high levels of litter.

“As we invest in promotional drives and build city hotels in anticipation of more visitors, we need to be mindful of the littered environment we are presenting to them,” he said.

The study showed a near-30% increase in the prevalence of PPE masks on our streets and an increase in alcohol-related litter such as cans and bottles.

“The need for PPE has not abated – unfortunately we’re still using disposable masks, we’re still dropping them at an alarming rate and they are still not being picked up,“ says Conor Horgan. “We are consuming more outdoors and this is translating into more food- and drink-related litter.” Despite this, the survey showed a 20% drop in coffee cup litter. There was also a steep fall-off in cigarette butts.

IBAL was once again critical of the failure of local authorities to address sites which they have previously highlighted as heavily littered, especially in urban areas. Of the 103 such sites exposed last year, fewer than half have been cleaned up in 2021. 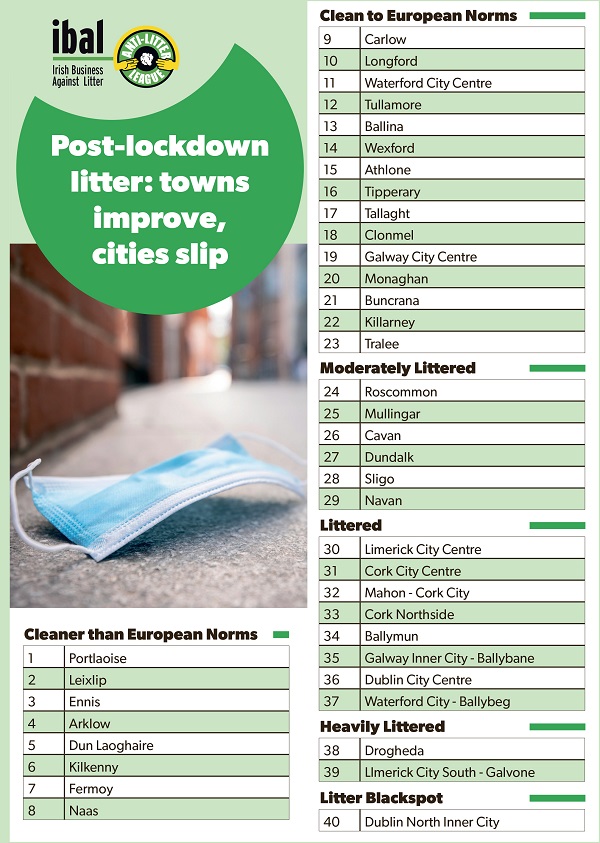