Portlaoise loses one of its true legends

Tribute on the sad passing of Johnny O’Brien 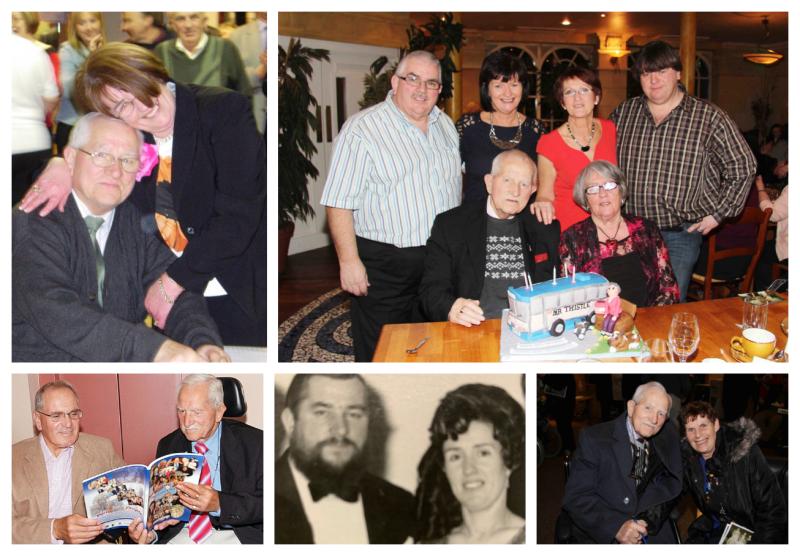 Johnny O'Brien with family and friends down the years

The sad passing on Friday, 7 January, of Johnny O’Brien leaves a huge void in Portlaoise, the town he loved so well.

As was mentioned in his death notice he was “a true son of Portlaoise”. In a lovely and fitting tribute to him at his Requiem Mass on Monday 10 January, Monsignor John Byrne, P.P. Portlaoise, who presided at the obsequies, said that Johnny was a legendary figure in his native town.

Hailing from old town stock, who were deeply involved with the newspaper sales business and taxi and bus service for generations, Johnny, and his siblings became involved in the business from an early age. He and his wife Maura, along with their family, built up a substantial and successful bus operation of their own, which still flourishes today.

A larger than life personality, Johnny, had a passionate interest in the history of his native town and in the people who lived in it, particularly in his own lifetime. It was this interest that prompted his hobby of collecting old photographs, particularly those from private family collections. The vast majority of these were never seen outside the immediate family circles. He also invited townspeople from various parts of the town and from people who had emigrated to share their thoughts and memories of growing up and living in the town.

Back thirty years ago, Johnny invited me to have a look at the material that he had gathered over the years and I immediately saw the value in what he had done. I advised him that the fruits of his labours should be published in book form to perpetuate this unique record of the social, sporting and business life of Portlaoise and its people over the previous century.

Johnny and I worked closely on the preparation, selection process, editing and design format and finally his first book of photos and reminiscences was published by the Leinster Express, when I was editor, in 1993. More below picture. 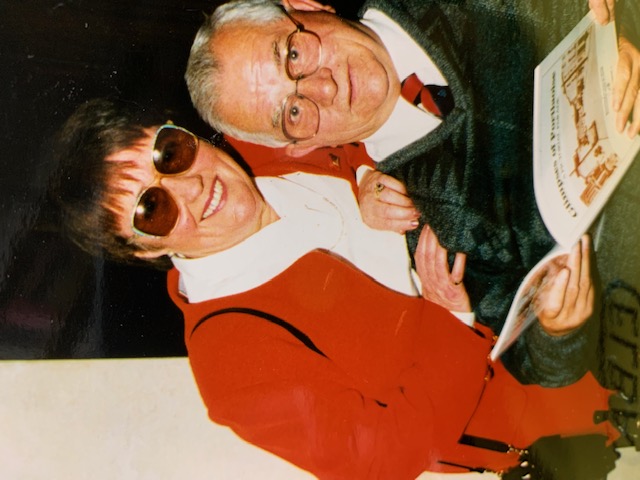 Pictured: Johnny and his wife Maura at the launch of Book No. 3 in the Glimpses of Portlaoise series in 1996

Of course that is not the complete story of Johnny O’Brien and his Glimpses of Portlaoise series. He was elated on the publication of his first book in 1993 but hardly a full week had passed when he suffered a horrendous accident when on a student run to Carlow College. Fortunate to survive he, however, suffered calamitous injuries to every part of his body.

Through wonderful medical interventions and a never-say-die determination he gradually made a remarkable recovery. He was left in a much physically impaired state but if he largely consigned the running of his extensive transport business to his wife, Maura, and his son, John, his great determination and his battery operated wheelchair ensured he could still fully engage in his great hobby. Msgr. Byrne in his tribute said that a lesser man would not have succeeded to carry on in the circumstances.

Johnny and I proceeded to publish no less than eight more books of a similar nature over the course of the next twenty years or so and, when work pressures forced me to take a backseat, the great man went on to publish two further books. They combine to represent what is probably amongst the best record of its kind in the entire country.

The books proved very popular with the community at home and further afield and mostly sold out in short time. True to the charitable nature of the O’Brien clan, Johnny and Maura found good charities for the profits on each book, helping to send deserving people on pilgrimages to Fatima which they organized on an annual basis and also to good causes, such as the Irish Wheelchair Association.

In recent years he donated a substantial part of his collection to the local library which will be of tremendous value to townspeople and local historians into the future. MORE BELOW PICTURE. 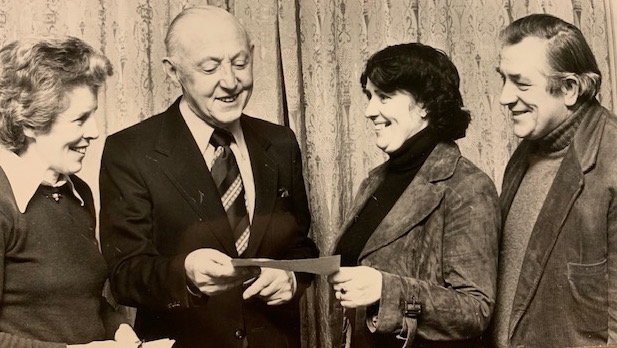 PICTURED: Johnny and Maura presenting a cheque to Peadar Murtagh and Mrs. J. Tyrrell on behalf of the Ballyroan Day Care Centre. The money was raised from a waltzing competition they organised in the Killeshin Hotel, Portlaoise, and the Happyland Lounge in Abbeyleix in the 1970s. This was one of the many charitable fund-raising events organised by Johnny and Maura over the years.

Wonderful work in the community

Johnny did not hide his love and admiration for Portlaoise and its people under a bushel and was always helpful to local endeavour in its many forms. He was a great supporter of the local schools and was held in high regard by the brothers and nuns who have a long history of educating the children of the town. He was to the fore in providing transport for their needs and in fund-raising for their worthy projects. Amongst the many roles he filled in this regard, he was an active member of the CBS Past Pupils Union and served as its President for a time.

Behind every great man there is a woman, and this was very true in Johnny’s case because he was supported and encouraged all the way, despite the major obstacles he battled to overcome, by his wife of sixty seven years, Maura. She was by his side all the way is raising their family, in running their successful business, in their many charitable projects and especially in helping him battle his way through many health crises over the past thirty years.

His brother, Billy, is the last surviving member of his generation of the O’Briens.  They all remained involved in the newspaper vending and transport businesses. Incredibly Billy is still involved in the distribution of newspapers some eighty years after he first started the job for his late father and mother, Richard, snr. and Elizabeth,  who set up the business and were famous townies in the olden days. Billy says that Johnny always looked after his “little” brother and Johnny’s passing breaks the strong brotherly bond they had since their youth.

Johnny is predeceased by his brother, Richard, and sister, Mary Martley, whose son, Billy, still sells newspapers from 1 Borris Road, where the business began nearly one hundred years ago. Two other sisters, Brigid and Teresa sadly died young.

Apart from his heart-broken wife, Maura, Johnny is survived by sons, Toney, Richard, who has his own successful transport business and John, who manages the family business as well as daughters, Christina Timmons and Maureen Ryan, who delivered a beautiful homily at the Funeral Mass. 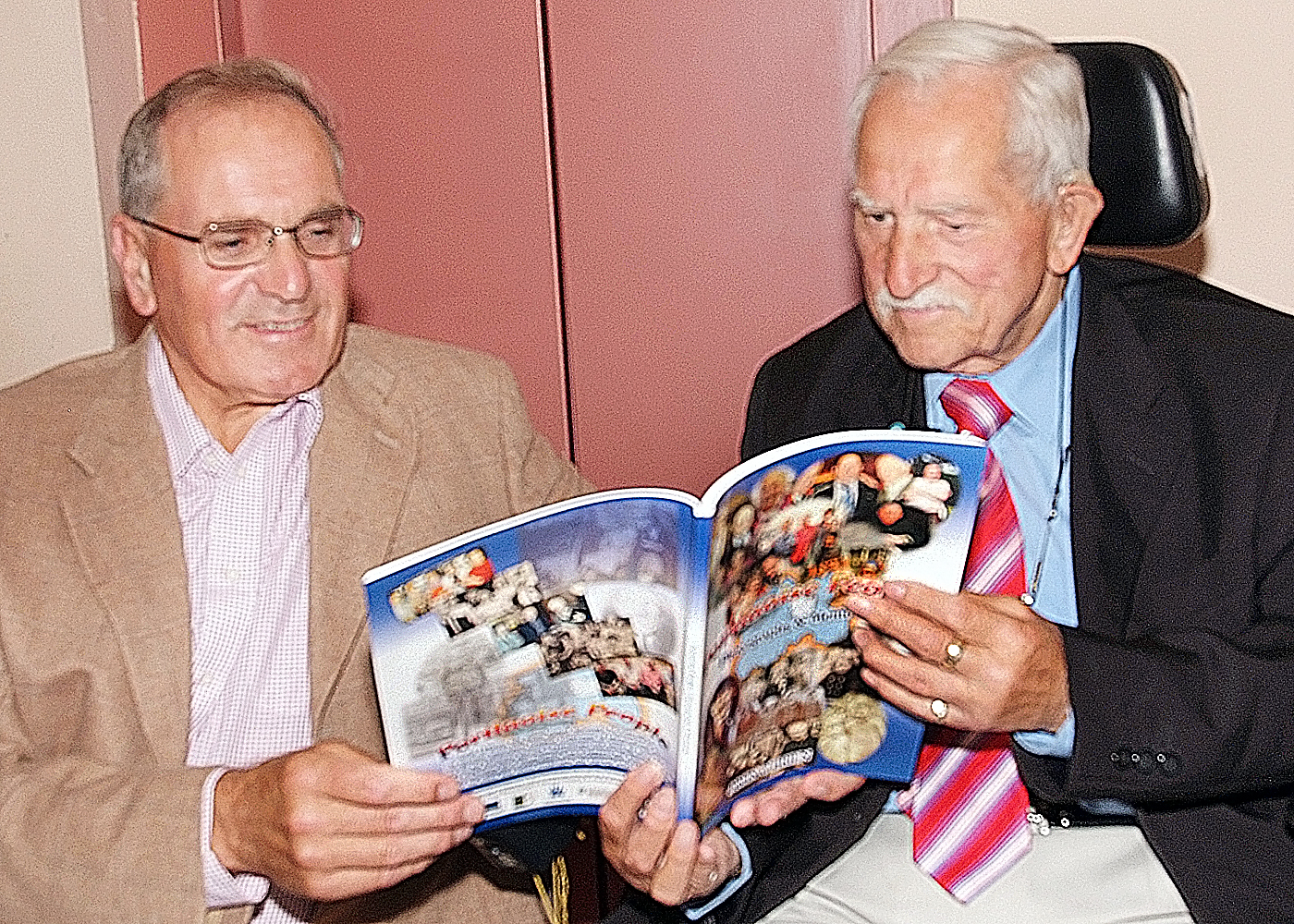 PICTURED: Publisher Teddy Fennelly with Johnny O'Brien at the launch of his latest book "Portlaoise People" in SS Peter and Paul's Parish Centre in Portlaoise last.

Billy poignantly delivered an impromptu rendition of one of Johnny’s favourite ballads, The Candy Store, at the graveside. Then an old musician friend from Tipperary, Maurice Crotty, gave Johnny a fitting farewell by singing other numbers to his own accompaniment, which was very much appreciated by the grieving family.

Johnny was a great traveller and brought his family and friends in his mini-bus on trips to Spain and other parts of Europe as far back as the 1960s, with his son, John, always there to help with the driving. He took New York by storm and enjoyed other trips to America, Africa and Asia in later years.

Maura recalls their first meeting as teenagers in the old Coliseum Ballroom, on the New Road, later to become the Danceland and now a lost part of the history of the town. It was love at first sight and she admits with a smile that Johnny having a motor-car, which was quite rare at the time, definitely whetted her interest in him. 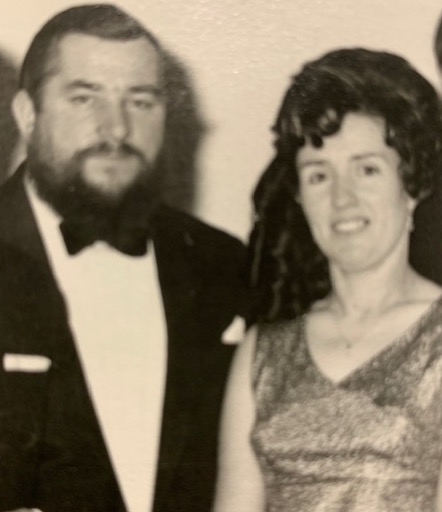 Pictured: Johnny and Maura at a CBS Past Pupils Union Dress Dance in the 1980s

They got married on Johnny’s 20th birthday on January 5th 1955 at Rath Church – and they never looked back.

They have been organizing an annual pilgrimage to Fatima for over 20 years and have organized many fund-raising events over the years for the cause. Among the other main recipients of their fund-raising efforts, which included a sponsored run from Belfast to Portlaoise, have been the Irish Wheelchair Association and the Kolbe Centre in Portlaoise.

Maura is determined to continue in her charitable fund-raising work, she says, just as Johnny would have wanted her to do after their 67 busy and happy years together. 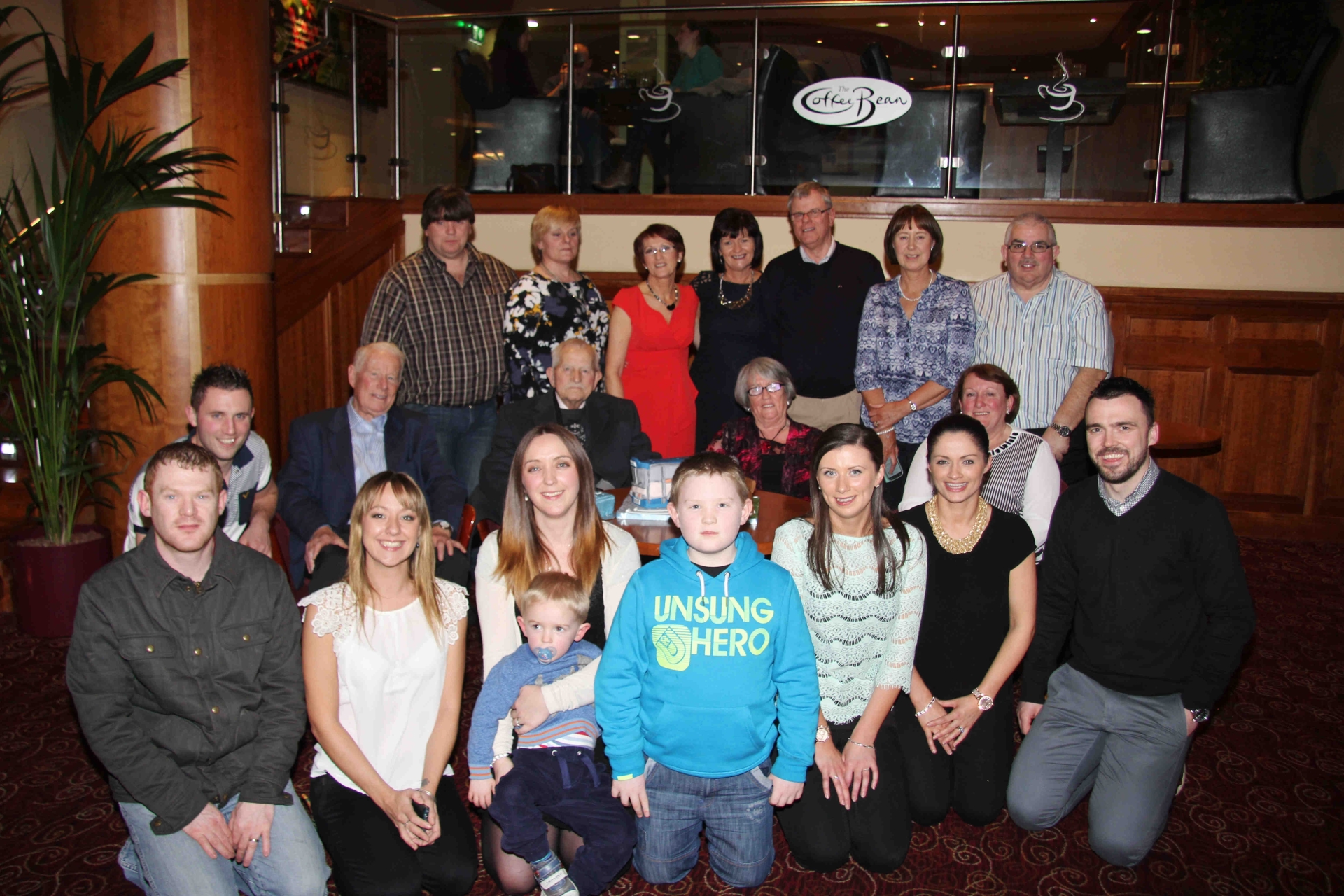