Opponents of Laois 'Bog Superdump' to meet this week 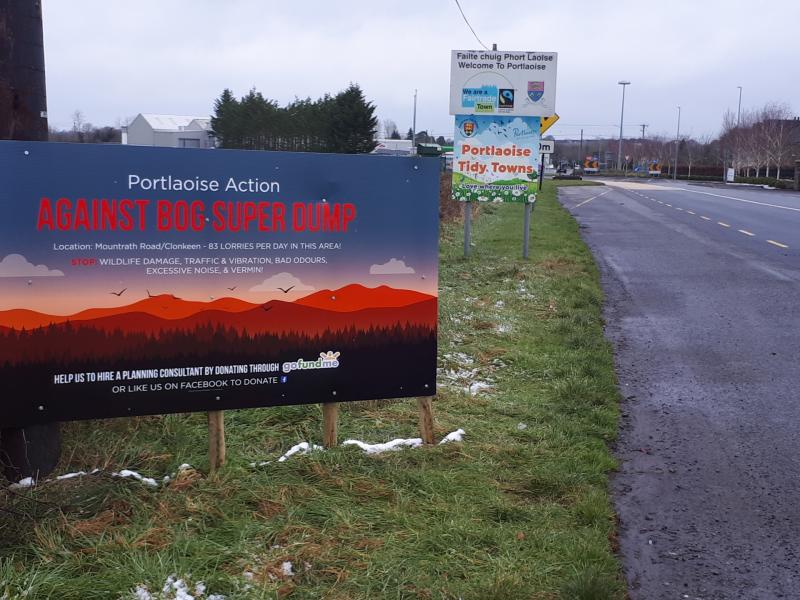 Objectors are meeting this week after planning was approved for what would be one of the Ireland’s largest anaerobic digesters on the outskirts of Portlaoise.

The massive Bord na Mona Powergen Ltd  facility will cover over 17 hectares, or around 42 acres, at Cúil na Móna cutaway bog near Junction 18 off the M7 motorway in Portlaoise. The plant will use 80,000 tonnes of feedstock a year and require the construction of roadways and 2.3km of gas pipeline.

Dubbed the ‘Bog Superdump’ by local opponents, the development is located close to Portlaoise. Cllr Thomisina Connell was opposed to the plans from the beginning. She believes the plant’s location was chosen purely for commercial reasons.

Cllr Connell said residents in the area are still coming to terms with the decision and are shocked and disappointed. She believes a Judicial Review, a costly legal challenge to the planning in the High Court, is the only way the residents can now prevent the plant from being built.

She noted that Bord na Mona has plenty of land it could have used to locate the site and said it was “foisted” on this community. “I don’t think anybody would want to live in the shadow of an anaerobic digester,”  she remarked. Cllr Connell said the opponents will meet this week in order to decide what to do. 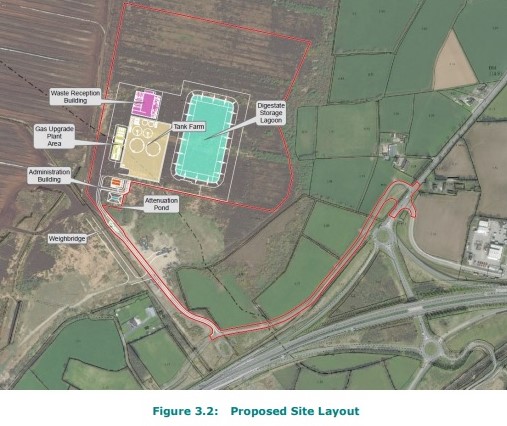 The planned development includes an electrical substation, a weighbridge and a reception centre covering 2,700 square metres will also be built to facilitate the plant.

Anaerobic digestion is a process where organic matter, in this case brown bin waste and animal byproducts, are treated in an oxygen free environment and the gas emitted in the process is saved for use.

An Bord Pleanala, who approved the project which had been appealed after it was initially approved by Laois County Council, attached 19 revised conditions to the ten year planning permission for the facility within the townland of Clonboyne and Clonkeen.

Around 70,700m3 of peat will be removed from the site area during the construction

between one and two metres. Peat deposition areas will be re-vegetated. Some of

the peat will be used for the creation of berms and planting, according to Bord na Mona.

A combined heat and power (CHP) plant is also proposed as part of the development.

generation as the CHP plant and hot water generator would run on the biogas from the plant. A gas flare is also proposed.

planning application to Laois County Council. These were from residents of the general area, two TDs, and eight councillors (one submission being a combined submission from a TD and a councillor).

In the appeals to An Boarda Pleanala, objectors expressed concern about the potential health implications. The prospect of vermin, flies, odours and the impact of 80,000 tonnes of waste being brought by lorry to the plant each year and the potential for an explosion.

Residents also question the impact of the plant on the locality in terms of its appearance and the potential harm a project of this scale could have on biodiversity.

An Bord Pleanala found many of the issues could be dealt with if correct mitigation measures were put in place at the facility. The board noted air quality could be adversely affected but said onsite procedures and control of storage areas could mitigate against the odour. In terms of biodiversity, the board noted the site represented only 2.4% of the entire Cúil na Móna bog.

An Bord Pleanala has applied 19 conditions to the proposal.  The maximum annual feedstock of 80,000 tonnes will have to be brought to the site by road. An Board Pleanala has said planning can only go ahead on condition the deliveries are confined to between 8am and 6.30pm from Monday to Friday and from 8am to 1pm on Saturdays. Bord na Mona can deviate from these times only in exceptional circumstances and only with prior written consent from Laois County Council.

The site will also undergo monitoring and Laois County Council will be provided with an annual report detailing the activities at the site. The report will have to detail the volume of raw materials used, the types of raw materials and the volume and weight of the gas produced at the plant.

An Bord Pleanala also requires an Bord na Mona to employ a qualified archaeologist to monitor all preserve and record all archaeological materials and features while construction work is taking place.

Bord na Mona has been contacted in relation to the plans but as yet has not responded to the Leinster Express.