Rents jump in Laois where just 14 homes are on Daft.ie rental list

Rent 120% higher in Laois than bottom of the market reveals Daft.ie 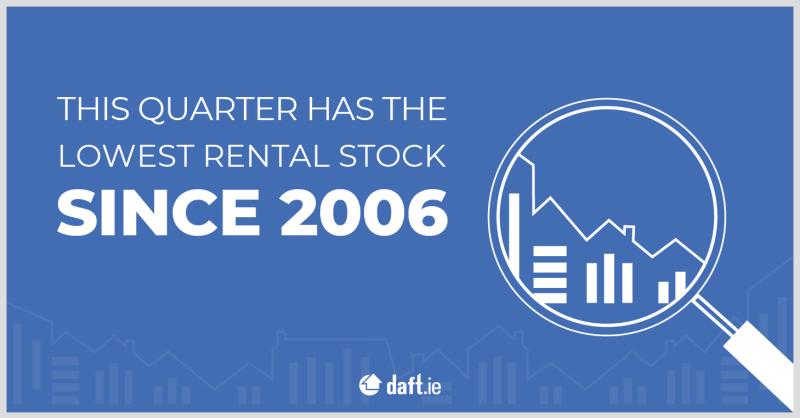 Rents in Laois have jumped again according to the latest report from Daft.ie which reveals the average cost is now over €1,100 a month some 120% higher than during the property crash.

The Daft Rental Report covers the period from July to September 2021.

It found that rents in Leinster's midland counties rose 9.0% year-on-year, reflecting a sharp fall in availability - just 41 homes were available to rent on November 1, the lowest on record.

In Laois, the report found that rents were on average 7.6% higher in the third quarter of 2021 than a year previously. While below the Leinster average, which excludes Dublin, it is a nearly a full percentage point higher than that national rate of increase.

The average listed rent is now €1108, up 120% from its lowest point. The report shows that the cost of rent has risen in Laois for all types of houses. A snap shot of Laois rents shows the following averages:

Daft also report on the yields for Laois landlords on their investment.

The Daft.ie website on November 9 has just 14 homes for rent in Laois. The highest, a three bed semi-detached house in Portlaoise will cost €1,518 per month. The cheapest €600 for a two bed apartment on the Laois Carlow border in Ballickmoyler.

MORE ON THE NATIONAL PICTURE BELOW Leinster Daft.ie breakdown. 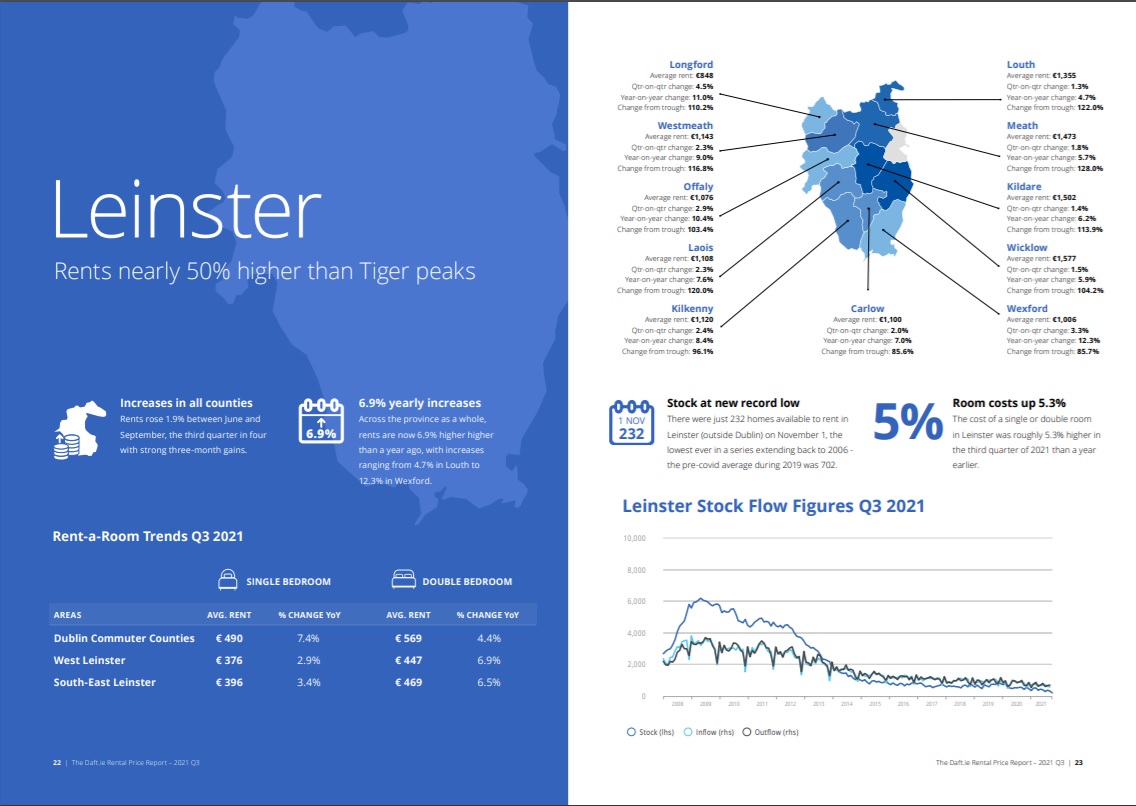 Nationwide rents in the third quarter of 2021 were an average of 6.8% higher than the same period in 2020, according to the latest Rental Report by Daft.ie.

The average monthly rent nationwide between July and September was €1,516, up 2.6% on the first quarter and more than double the low of €742 per month seen in late 2011.

Daft say the increase in rents around the country reflects an on-going and unprecedented scarcity of rental homes. Nationwide, there were just 1,460 homes available to rent on November 1, an all-time low in a series that extends back to January 2006.

The analysis says the level of availability now is almost half the lowest level recorded between the start of 2006 and the outbreak of Covid-19, which was 2,706 in mid-2019. While Dublin had initially seen an increase in availability after the start of the pandemic, there were just 820 homes available to rent on November 1st, the lowest ever recorded for the city in two decades.

In Dublin and in the other cities, the stock of homes to rent is between 70% and 80% lower than a year ago. Outside the cities, availability continues to fall – with just 559 homes to rent, down almost half on a year ago.

While rents rose around the country between June and September, there remains significant differences in annual inflation rates. Rents in Dublin are just 2.7% higher than a year ago, while rents in Cork and Galway are 6.9% and 8.3% higher. Inflation in Limerick and Waterford cities is higher again, at 8.9% and 10% respectively, while rents outside the cities are 11.9% higher than a year ago. In parts of Connacht, rents rose by 20% in the twelve months to September.

Commenting on the report, Ronan Lyons, economist at Trinity College Dublin and author of the Daft Report, said: “Covid-19 temporarily reshuffled Ireland’s rental problems but the latest figures confirm those problems of shortages are getting worse over time. While Dublin had initially seen an increase in rental availability, with the number of rental homes on the market doubling from 1,600 to nearly 3,200 in 2020, those trends have reversed rapidly, with just over 800 homes available to rent on November 1st. In Ireland’s four other cities, there were 81 homes available to rent in total.

“While some argue against the construction of large numbers of purpose-built rental homes, any solution to the chronic shortage of rental homes in Ireland must include building new ones. In this regard, the pipeline of almost 45,000 new build-to-rent homes – while concentrated in the Dublin area – is particularly welcome. More than 50,000 more rental homes have been proposed. Their construction would help improve the availability and affordability of rental homes, something for policymakers and planners to consider.”

The full report is available HERE and includes a commentary by Ronan Lyons, Associate Professor of Economics at Trinity College Dublin and author of the Daft Rental Report.