Dublin dictates where people want to live in Laois 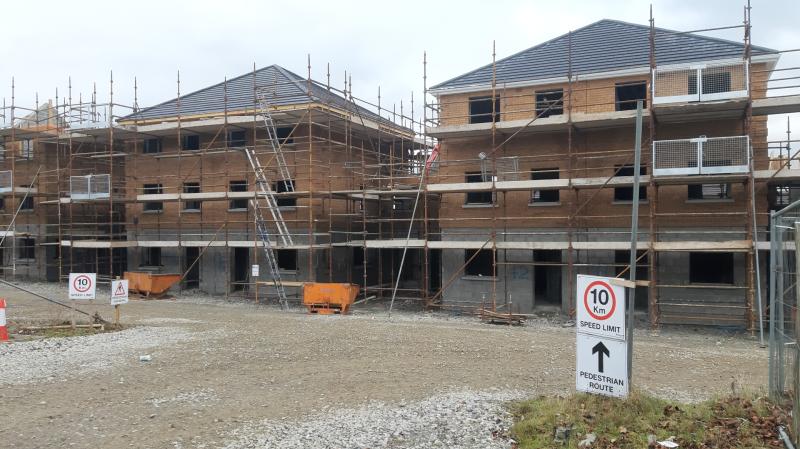 Construction nears completion on a development in Kilminchy, Portlaoise

Proximity to Dublin and Kildare looks likely to be dictating where new homes are being built in Laois official new figures appear to reveal.

The trend which began in the Celtic Tiger appears to as strong as ever in new house completion statistics which also show the east of the county had one of the highest number of house completions in 2021 outside the greater Dublin area and other cities.

The figures also confirm a significant split in Laois when it comes to location of new homes. The east of the county from Portarlington to Graigcullen saw more than three times more homes were built in the east of the county than the west and southwest of Laois which also lagged well behind development around Portlaoise.

The Central Statistics Office (CSO) has released new figures for New Dwelling Completions in the fourth quarter of 2021 and total completion figures by local electoral areas for 2021. It breaks new building down by Local Electoral Area (LEA) in Laois and other counties.

A total of 392 houses were built in Laois last year. At 183 new homes, the Portarlington Graiguecullen Local Electoral Area had highest number of new dwelling completions in the county in 2021. This was one of the highest in Ireland outside the big towns, cities and Dublin.

The population in this LEA in 2016 was 28,096. Apart from the two big towns the district includes Stradbally, Timahoe, Ballylinan, Ballyadams, Killeshin, Crettyard, Killenard, Ballybrittas. It borders Kildare, Carlow, Kilkenny and Offaly.

The next biggest area for building was around Portlaoise where 148 new homes were built last year. The population of the Portlaoise LEA is 31,794 people with more than 20,000 living in the county town environs. It includes Abbeyleix, Ballyroan and Ballinakill. It borders Kilkenny.

Propping up the table is the Borris-in-Ossory Mountmellick LEA. Just 61 new homes were built in the district last year. The figure are in line with many LEAs away from the big towns or cities. With 24,807 people the district includes Rathdowney, Mountrath, Durrow, Castletown, Camross, Errill, Clonaslee and Rosenallis. It borders Tipperary, Offaly and Kilkenny.

PROPERTY WATCH: Little Laois townhouse could be the perfect challenge

The CSO also published figures for the last quarter of 2021 in Laois and other counties. A total of 67 new homes were finished in the three months to December. Of these 32 were stand alone homes while 32 were located in building schemes just five five apartments were completed.

At a regional level, four regions - Midlands, Dublin, Mid-West and South-East - saw an increase in completions in 2021 from 2020. The Midlands recorded the second highest increase with almost 10% more dwellings completed in 2021 than the previous year.

EXPLAINER: What the remote working law and when can your boss can say no to home working

Kildare was the local authority with the second highest total number of completions in the year (2,027) and the quarter (682) - in both cases behind Dublin city.