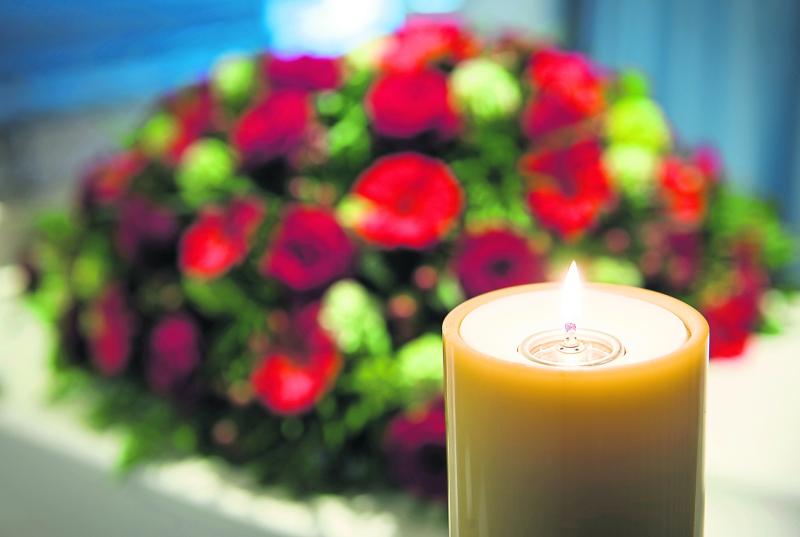 Peacefully at home, surrounded by her family and friends. Predeceased last year by her husband Jim. Deeply regretted by her daughter Ruth and her partner John and her son Mark and his partner Fiona, grandchildren Alannah, Elisha and Kody, her brother Sean, (Allenwood), uncles and aunts, neices and nephews, relatives and many friends and her neighbours.

The death took place on Wednesday, February 22 of Sean Delaney of Esker Gate, Mountmellick and formerly of The Oak, Barnashrone, Mountmellick.

Reposing in Moloneys Funeral Home on Thursday from 4.30pm, removal at 5.50pm to St. Josephs Church, arriving at 6pm. Requiem Mass on Friday at 12 noon, burial after in St. Josephs Cemetery.

At home. Beloved son of Paul and the late Eileen. He will be sadly missed by his loving father, aunts, uncles, cousins and relatives.

Reposing at Carpenter Bros Funeral Home, Barrack Street, Carlow from 4pm on Thursday with Prayers at 9pm. Removal on Friday at 10.30am to The Holy Cross Church, Killeshin, arriving for Funeral Mass at 11am. Burial afterwards in the adjoining Cemetery.

Reposing at his residence on Tuesday from 4pm with Rosary at 9pm. Removal on Wednesday at 11.15am arrivng St Michael's Church, Portarlington for Requiem Mass at 12 noon. Funeral afterwards to St Michael's Cemetery.

At Portlaoise Regional Hospital. Predeceased by her brother Sean and her sister Nancy. Deeply regretted by her husband Jim and her daughter Anne, her sisters Margaret (Cruite), Nuala (Beale) and Kathleen (Barry), nephews, nieces, relatives and friends.

Reposing at O'Sullivan's Funeral Home, Rathdowney on Wednesday evening from 8pm with rosary at 9pm. Funeral Mass in The Church of the Immaculate Conception, Ballacolla on Thursday at 11am, followed by burial in St. Fergal's Cemetery, Ballacolla.

Reposing at his residence from 12 noon on Tuesday with rosary at 9pm. Requiem Mass at the Church of the Sacred Heart, Stradbally on Wednesday at 12 noon, followed by interment in Ratheniska Cemetery.