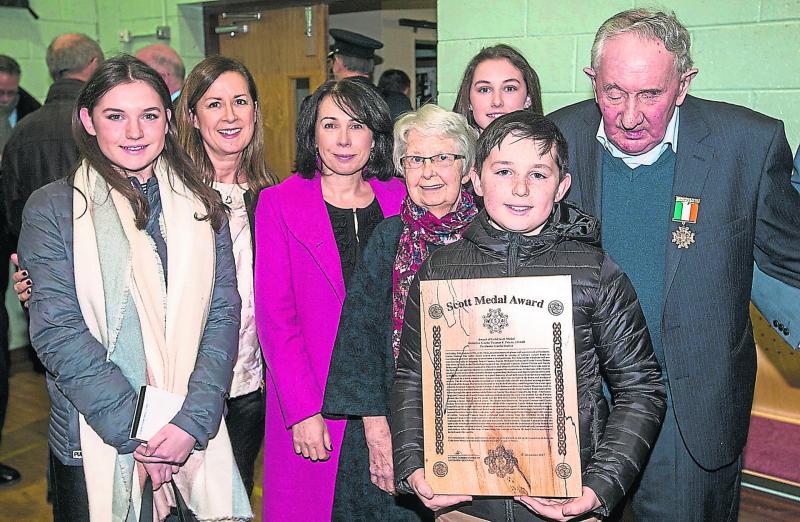 Betty and Tom Peters with family at the presentation of Scott Medals in the Garda College, Templemore in 2017. Picture: Alf Harvey.

The death has taken place of the wife of a Garda who was almost killed but suffered life changing injuries after being blown up by the IRA on the Laois Offaly border the 1970s at the height of The Troubles.

Betty, who hailed from Moneygall in Co Offaly, was predeceased by her husband Tom and son Dick. She was loving mother to Elma and Breidette (O'Donnell) and cherished grandmother to Ellen, Eva and Luke. Deeply regretted and sadly missed by her loving family, son in law Paul, brothers Phillip and Eamonn, sister Anne Holohan, nieces, nephews, relatives and friends.

A teacher by profession, the deceased lived or many years as carer to her husband Tom a former Garda Detective in Portlaoise. The Kilkenny native was one of five gardaí blown up by an IRA gang in 1976. Garda Malachy Clerkin was killed in the attack.

Det Peters suffered lifelong injuries in the bomb on the Laois Offaly border near Portarlington in Garryhinch. From then until his death in October 2018, Betty remained with Tom helping him recover from, and live his injuries, while they reared a family of three children at their home on the Stradbally Road in Portlaoise. Tom lost his sight and hearing and suffered other injuries.

Betty was with Tom and their family and his surviving colleagues in Templemore in 2017 when the bravery shown by the gardaí was finally recognised when they were awarded with the Scott Medal for bravery - the highest honour that can be bestowed on gardaí by the Irish State.

The men were called to Garryhinch after Portlaoise Garda Station received a message that the home of then Laois Offaly TD Oliver J Flanagan was about to be attacked by the IRA.

"It was with great sadness that I learned of the death of my neighbour Betty Peters. Betty was a kind & generous woman who lovingly looked after her husband Tom for 40 years following the injuries he sustained in an IRA bomb attack in Garryhinch.

"Betty remained of positive disposition in the face of much adversity & sorrow.  I offer my deepest sympathy to Elma & Breidette," he said.

Laois Offaly Division Garda Chief Superintendent John Scanlon passed on his condolences to Betty's family as did many others including Tom Phelan on behalf of members Garda Siochana Retired Members Association.

Given the exceptional climate and to protect the welfare of everyone who knew her, a private funeral, with immediate family only, will take place, at 12 noon on Monday in SS Peter and Paul's Church, Portlaoise.

It will be streamed on the webcam; http://www.portlaoiseparish.ie/web-cam/