Late try knocks Portlaoise out of the Provincial Towns Cup 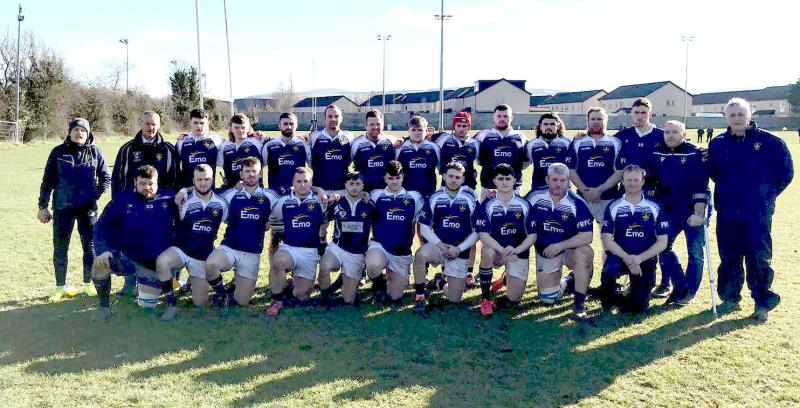 HAVING managed to hang onto their Division 2A league status in the past few weeks, there would be no joy for Portlaoise when they travelled to Clondalkin on Sunday for the opening round of this year's Provincial Towns Cup.

The home side may not have enjoyed their league campaign when they suffered relegation and will play alongside Portlaoise in the coming season. Consequently they were really up for this game seeing it as a means of salvaging something from the season. It was also going to be an emotional afternoon for the Dublin club as this was to be their last home game at Gordon Park having new grounds across the motorway.

In the end the home side were probably just about deserving of their win but Portlaoise will look back and realise that they made too may errors, particularly in defence. They were also let down by their set pieces with too many line-outs lost and being driven back on occasions in the set scrum.

Mind you, it was form a Clondalkin scrum that Portlaoise opened the scoring in the eighth minute. Having disrupted the home side's scrum Portlaoise won a penalty but Jack Reddin's effort came back off the post. Clondalkin made a mess of their clearance attempt and Portlaoise won a five metre scrum. They moved the ball left, went through a number of phases before hooker Ryan McEvoy crashed over for the try.

Reddin landed the conversion and the visitors led by seven. But it was Clondalkin who responded best to this score. It seem to galvanise them as they tore into Portlaoise putting them under severe pressure. It was when they spread it wide that they caused huge problems for the Portlaoise defence and really could, and possible should, have scored a couple of tries but poor passing let them down on a number of occasions.

Three or four times the home side looked sure to score only to have the ball snaffled from their grasp within feet of the line, not surprisingly Ross Cooper and Mark Sherlock were to the fore in this area. Portlaoise really should have added to their tally 25 minutes in when Clondalkin were penalised for not releasing. The home backs were then penalised for being offside. But from the ensuing line out the ball was lost and Clondalkin cleared the danger.

Minutes later Portlaoise had Bosco Ramsbottom very harshly yellow carded and Clondalkin would make use of the extra man. A couple of minutes after the sin-binning from a line out on the left Clondalkin whipped the ball across the backs for winger Niall Nolan to score but Jack Holland missed the conversion.

Approaching half time Portlaoise, despite having been under a lot of pressure, were holding on to their two point lead, but that was about to change. The home side ran the ball from inside their own half and full back Ryan Maher waltzed through the Portlaoise defence unchallenged to score under the posts. Holland added the extras giving his side a 12-7 lead at the break.

Sean Mullin was introduced by Portlaoise just before the break when outhalf Evan Brown picked up and injury. Mullin slotted into the centre and his appearance was to prove to be a positive. Portlaoise started the second half brightly and just like the opening half looked as if they were to register an early score. Displaying more urgency they whipped the ball across the three-quarters from a line out on the 22.

Winger Bosco Ramsbottom headed for the corner, was stopped just short and then penalised for not releasing. At the other end Clondalkin came close after Niall Nolan kicked ahead but his run was impeded and they had a penalty on the 22. From the line out they moved the ball wide but knocked on the ball. They won another penalty in the 55th minute when Portlaoise were judged to have had hands in the ruck and Holland duly obliged.

Credit to Portlaoise they responded in the most emphatic manner. Having won a penalty after Clondalkin failed to release, Reddin placed the ball in the corner. The outstanding Peter Coss rose to claim, and as they rolled towards the line, the ball was moved to a number of hands before getting back to Coss as they went over the line.

Reddin landed a magnificent conversion from out side and now Portlaoise trailed by just a point entering the final quarter. Play ebbed and flowed now as each side had the moments of superiority before, with 14 minutes remaining, Holland put four between the sides with a penalty. But Portlaoise were not prepared to lie down. They powered their way back into Clondalkin territory, won another penalty, went for the line out where once again Coss claimed clean possession.

The Blues went on another rolling maul and after four pick and drives it was Mark Sherlock who swung off the left edge of a drive to score. Yet another fabulous conversion from Reddin had Portlaoise leading 18-21 with less than ten minutes to play.

As was the nature of this game now it was Clondalkin's turn to react positively and this they piling the pressure back on Portlaoise. But the visitors were holding solid but it was taking a huge effort. Unfortunately during this period they lost the outstanding Coss to concussion. The flanker was subsequently removed to Tallaght hospital but was allowed home that night.

When the home side worked their way into the left corner, from a line out their no.8 Simon King peeled around the front and get in at the corner. This gave them a two point cushion with two minutes of normal time remaining and while Portlaoise made a gallant effort to get back down field and score, but that was how it ended. Every one in Portlaoise RFC wishes Peter Coss and speedy recovery.