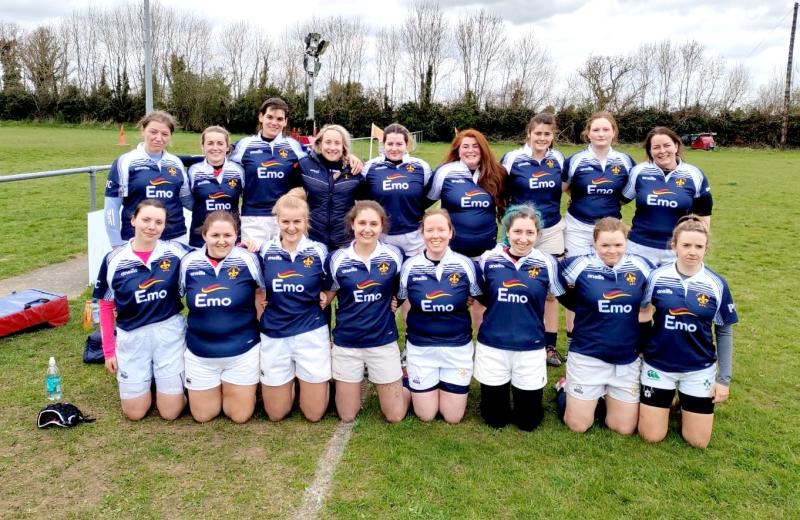 PORTLAOISE senior women travelled to Westmanstown on Sunday and secured a spot in the Paul Cusack Plate final to be played on Saturday 23 April following a convincing win against an under-strength Garda Westmanstown side.

The Portlaoise ladies were in excellent form, with one to 16 up for the challenge. Right from the kick off, Portlaoise put pressure on their opponents with Sandra Keegan placing the kick off nicely for her namesake, scrum half Jenny Keegan to catch. Keegan's quick hands set up centre Patrycja Harasim.

Harasim made a strong break through the middle with hooker Steph Gleeson on the receiving end of a super pass which she ably finished in the corner. Roles were reversed with the drop out when Trish Harasim again scooped the ball out of the sky as she reversed backwards. Harasim then set up captain Rebecca Mullen whose clever pass saw scrum half Sandra Keegan accelerating past Garda's full back for the second try of the afternoon. Jenny Keegan calmly slotted the conversion.

Portlaoise were in no mood to show mercy and, when from the drop out, second row Yvonne Palmer took the ball on, popped to sister and front rower Rosie whose quick hands set Rebecca Mullen free. Mullen then returned the favour by drawing the Garda full back in and floating the ball back to Rosie Palmer who ran a superb support line and dotted down over the white wash.

It was Rosie Palmer who touched down again minutes later after hooker Stephanie Gleeson won the ball back with a dominant tackle. Gleeson’s fitness was on display seconds later, when she was back up on her feet and latched onto Palmer to ably assist her over the try line.

Winger Denica McGrath celebrated her first try midway through the first half. This was a real team effort when, off of a scrum, Alison Holmes punched a hole down the blind side giving space to the backline. Quick hands through Harasim, Mullen and finally to McGrath on the wing, whose strong leg drive and awareness, saw her in under the post for Portlaoise's fifth try of the day.

It was Captain Fantastic, Mullen's turn to take a try when front row Abbey Hearns caught the kick and set Yvonne Palmer up nicely for a show and go. From there Palmer passed to her sister Rosie, who set up Mullen on the touchline for the try.

Soon after, Rachel Palmer got in on the action, after excellent work from Alison Holmes and Emma Smith through the middle. The nimble winger showed off her strong running and quick side step for Portlaoise's seventh try.

Becca Mullen got over the try line for her second of the afternoon following a precise skip pass from out half Rachel Murphy, to close the first half account for Portlaoise, who looked strong and full of running on the half time mark. If the first half was all about the backs, with quick hands, skip passes and support runs, the second half was dominated by Portlaoise’s powerful pack.

Aoibheann Egan, Emma Smith, Shauna O’Grady and Abbie Hearns worked hard across the pitch, covering every ruck and winning back possession time and again with their strength and jackaling. This pressure led to a hasty kick clearance from Garda Westmanstown, which didn't make touch on the right. This was easily dealt with by full back Hayley Fitzgibbon, who raced up the wing.

Abbey Hearn's pick and go drew in the Garda back line and a smooth pass from out half Rachel Murphy saw Mullen pop the ball out of the tackle to hooker Stephanie Gleeson who touched down just to the left of the post. Jenny Keegan converted and Portlaoise regrouped one last time.

From a Garda box kick clearance, Murphy gathered and slotted a pass out to Palmer. Shauna Grady's and Aoibheann Egan's strong rucking enabled quick ball out to the backs where winger Rachel Palmer rounded her opposite number and touched down for the final try of the afternoon.

Stand out performances on the day for Portlaoise were captain Rebecca Mullen for her work rate and strong running. Alison Holmes in the back row deserves a mention for her ability to spot a gap and make ground through the middle. Rosie Palmer’s quick hands along with Abbie Hearn’s ability to punch holes through the middle combined to draw the Garda’s defence. This style of play offered

Portlaoise’s back line the space and time to produce champagne rugby and ultimately claim a day out in their second final of the season.