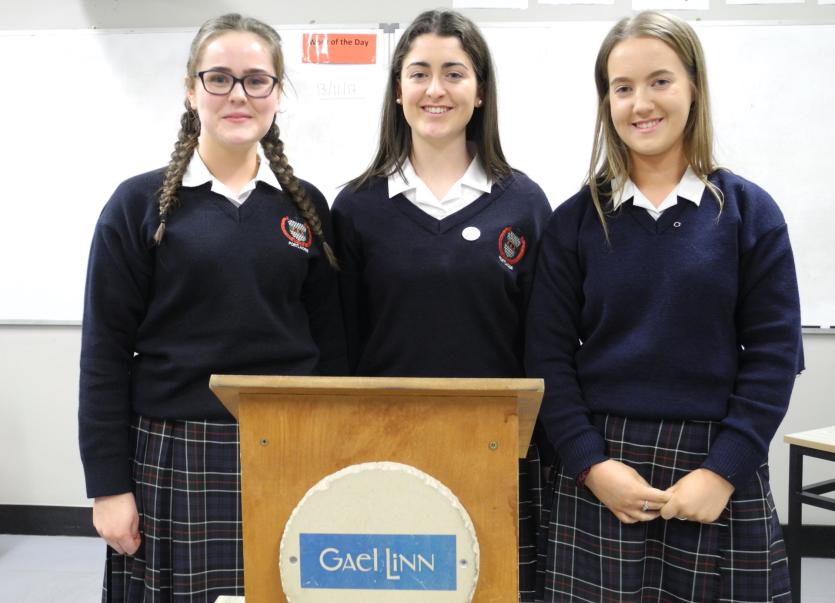 Laois debaters outdid themselves at a Gael Linn competition, proving that Irish skills in the county are inproving all the time.

Despite tough opposition at the preliminary heat of Comórtas Díospóireachta An Phiarsaigh 2017 held in Scoil Chríost Rí, Portlaoise, on 13 November last,  young debaters from the host school, along with St Fergal’s College, Rathdowney and Heywood Community School, Ballinakill, have all qualified through to the next round  of the competition! 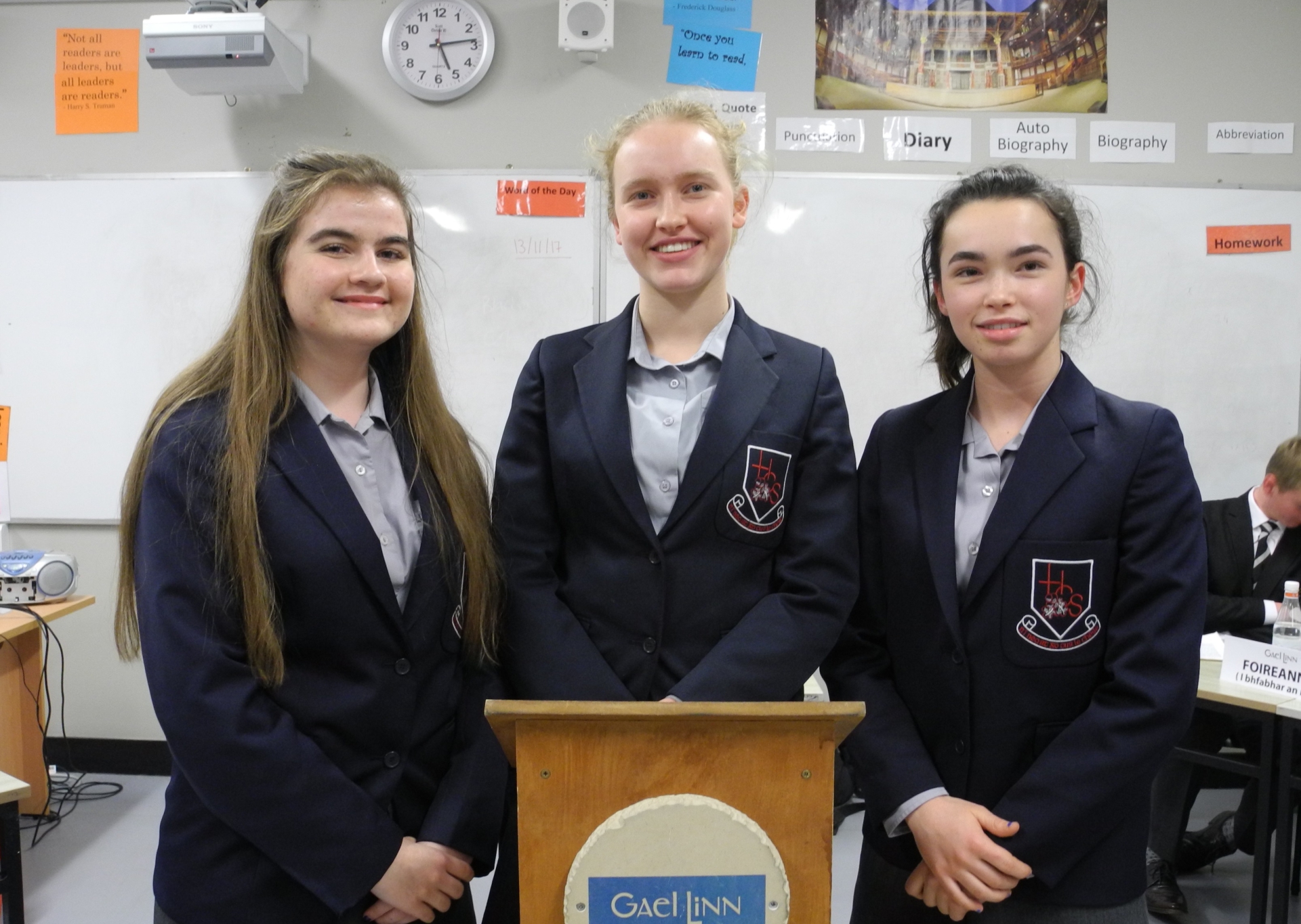 First up to the podium on the day were the junior teams from St. Fergal’s College, Rathdowney and hosts, Scoil Chríost Rí, Portlaoise, who  advocated that the Rose of Tralee competition should be done away with ( ‘Ba cheart deireadh a chur le comórtas ‘Rós Thrá Lí!) while the students of  Newbridge College and Holy Family Secondary School, Newbridge, disagreed. Each speaker had three minutes in which to argue his or her case, and many valid points were made on both sides.  In the end, however, it was the  Rathdowney and Newbridge  teams who won over the adjudicators in their favour.

Later on that afternoon, the topical motion ‘ Is Parthas turasóireachta í Éire an lae inniu!’ (The Ireland of today is a tourist’s Paradise!) tested the knowledge and resourcefulness of the senior teams from the same schools.

This time, the young orators from Scoil Chríost Rí were confident in their delivery and were deemed winners on the night, along with their peers from Newbridge College.

The senior team from Heywood Community School, Ballinakill, also qualified through their heat against teams from Coláiste Íosagáin, Portarlington and Cistercian College, Roscrea on the day.

All the successful Laois teams now look forward to the challenge of round two, due to take place before the Christmas holidays.

Competition co-ordinator, Jamie Ó Tuama, thanked the teachers who helped the teams prepare for the debates,  along with the large number of supporters who had travelled to the event.

"Gael Linn has always had as a priority that pupils acquire good levels of competence in spoken Irish and that they have a positive attitude towards Irish. We are very pleased with the level of entries in Comórtas an Phiarsaigh this year, and with the high standard of debating skills shown by students so far," he said.

Comórtas An Phiarsaigh is a national debating competition organized annually by Gael Linn for second-level schools nationwide, and funded by Foras na Gaeilge.  Firmly established on the school calendar for almost 60 years, the principal aim of the  competition is to promote the use of Irish in schools and among young people. 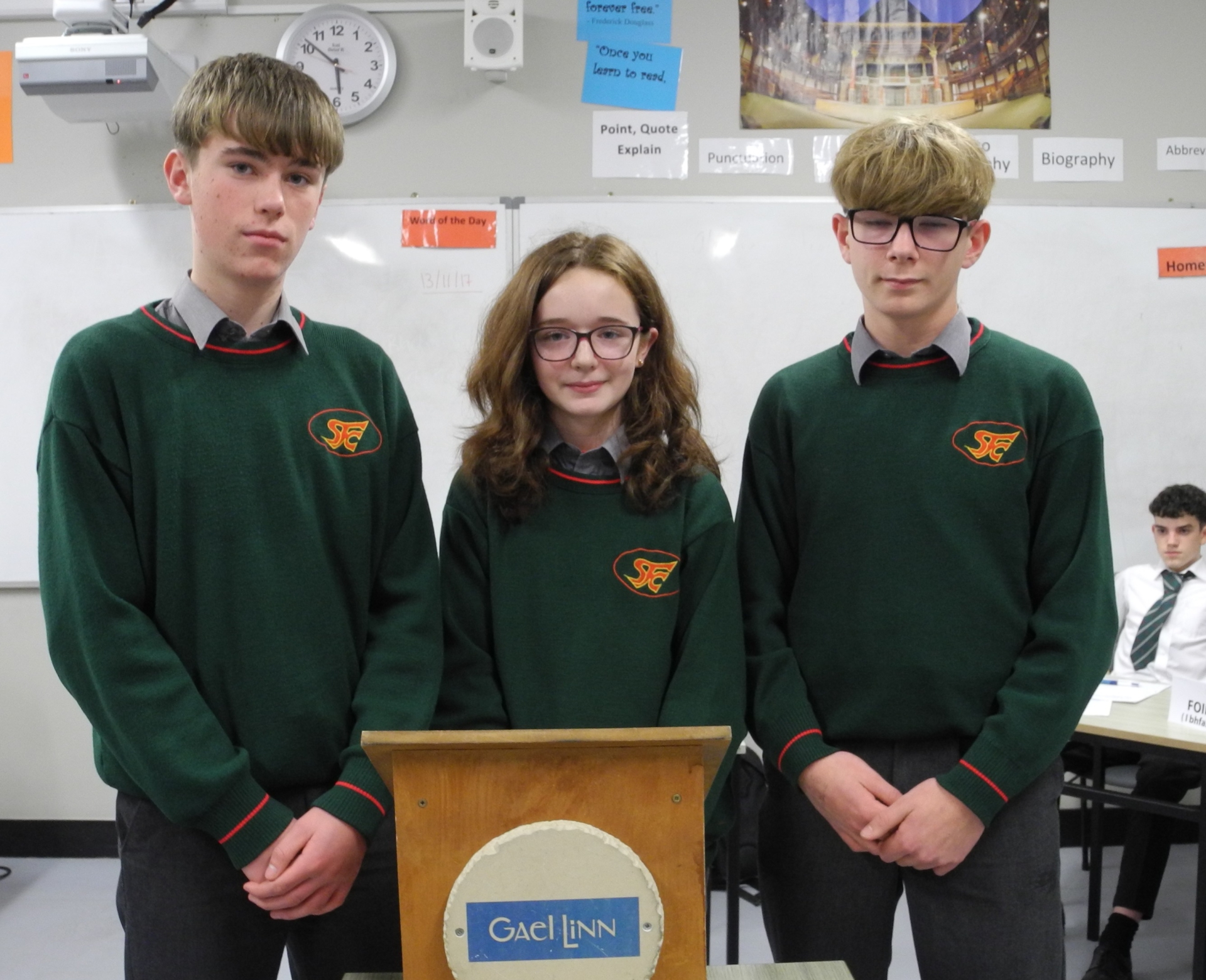