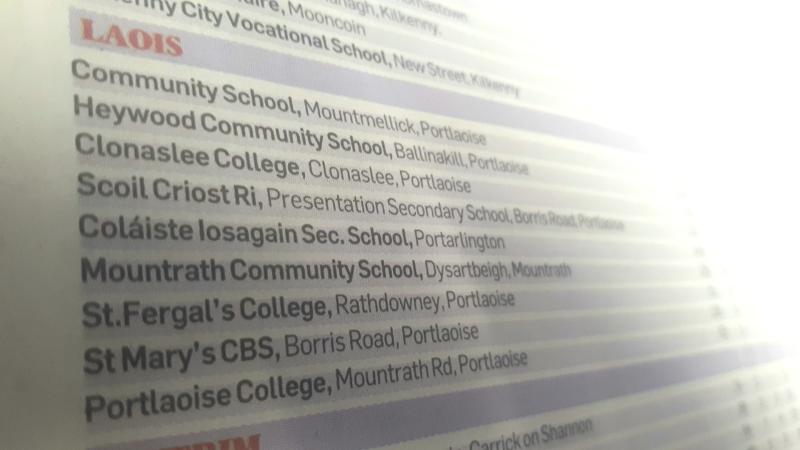 For the second year running, Mountmellick Community School is number one in Laois for the number of Leaving Certificate students who progressed to third level colleges.

It was the smallest Leaving Cert group in Mountmellick CS ever, because the school re-introduced Transition year that year. Some of the 2017 students had an almost 'one-to-one' teacher student ratio for some subjects.

Second in the list for Laois is Heywood Community School in Ballinakill where 115 students sat the Leaving Certificate last June. Of those, 112 students, or 97 percent have started third level courses.

Third is Clonaslee Vocational School, where of the 43 students sitting the 2017 Leaving Cert, 39 of them, or 91 percent, have started third level courses.

Fourth is Scoil Chríost Rí in Portlaoise, where 117 girls sat the 2017 Leaving Cert, and and 101 of them, or 86 percent, have started third level.

Fifth is Coláiste Iosagáin in Portarlington, the biggest secondary school in Laois and Offaly. There were 143 Leaving Cert students, and 108 of them, or 76 percent, started third level.

Next is Mountrath Community School, and of the 125 Leaving Cert students there, 89 of them, or 71 percent, started third level.

Seventh is St Fergal's College in Rathdowney, and of the 51 Leaving Certs there, 36 of them, or 71 percent, started third level this year.

Knockbeg College on the edge of Laois near Carlow is classed as a Carlow school in the tables, but has many Laois students. There 82 percent of the 68 Leaving Cert students have gone on to third level, at 56 students.

The private Cistercian college for boys, rescued from closure last year with donations from supporters, topped the Tipperary poll, with 100 percent of their 31 students progressing to third level. Including last year's Leaving Certs who only started third level this year, they reached 135 percent, with 42 students starting in third level this year.

Coláist Phobal Ros Cré had 99 students sitting the leaving cert, and 78 of them, or 79 percent, have started third level.

The figures exclude students who have begun PLC courses or apprenticeships, and also those who have started college abroad.