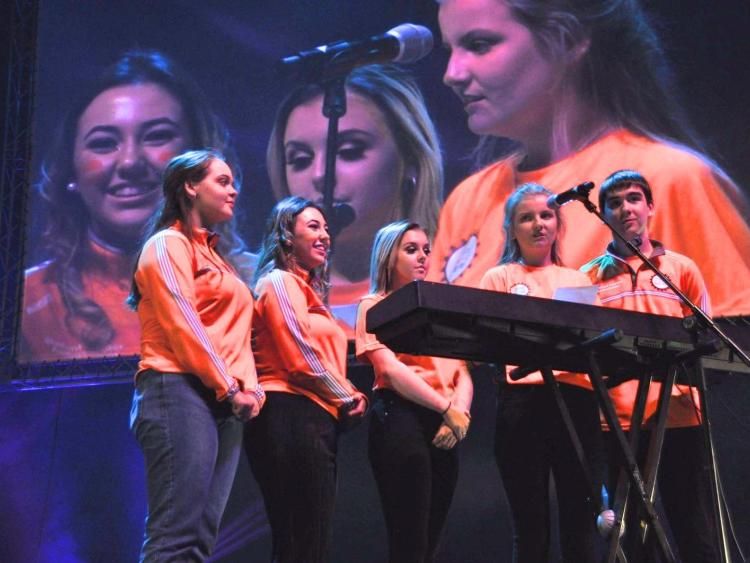 Laois has two student leaders for Cycle Against Suicide, who are working to keep the message alive that it is ok to feel down, and definitely ok to ask for help.

Sarah Keenan from Coláiste Iosagáin in Portarlington, and Fionn Marum from Portlaoise College, represented their schools and county, at the Student Leaders Congress in the 3Arena on January 18.

They joined 7,500 students from all over Ireland who came to celebrate all that is good about positive mental health.

Also proudly representing Laois was teenage singer Curtis Walsh from Portlaoise, who performed one of his own songs for the huge crowd onstage, to huge applause. Watch his performance here.

Both Sarah and Fionn have been working hard in their respective schools this year to highlight the importance of mental health.

On the day Sarah performed in the Congress Dance and interviewing schools about their projects, while Fionn worked backstage as part of the stage management team.

“It was one of the proudest days of my life, being on stage and seeing my best friends, teachers and parents in the crowd smiling up at me. The guest speakers were very inspiring and the day was a mix of fun and happiness while also dealing with a very important topic. I've made friends for life with the other leaders,” said Sarah.

Both Coláiste Iosagáin and Fionn's school Portlaoise College will be partaking in the 'Schools Go Orange' day on February 9.

“It meant everything for me to be there, being involved in Cycle against Suicide has really changed my life, getting to meet people like Sarah and the other student leaders has been amazing, we're like one big family,” said Fionn.

“The prefects are very involved, along with the Meitheal leaders, we also have great help from our teacher Miss Cripps,” he said.

The Congress day featured big music acts including the Booka Brass band and Mundy. Speakers included lawyer Sinéad Kane, whose blindness did not stop her from pursuing her dream career, and Kevin Hines who lives with Bipolar Disorder.

The student leaders performed the Congress Dance, to Can’t Stop The Feeling, by Justin Timberlake, as well as their original song, “Echo”, which they hope to soon release as a single.

Cycle Against Suicide 2018 travels through 17 counties starting on April 28, to promote their positive message 'It's OK not to be OK, and its absolutely OK to ask for help",  and to raise awareness of local mental health supports.