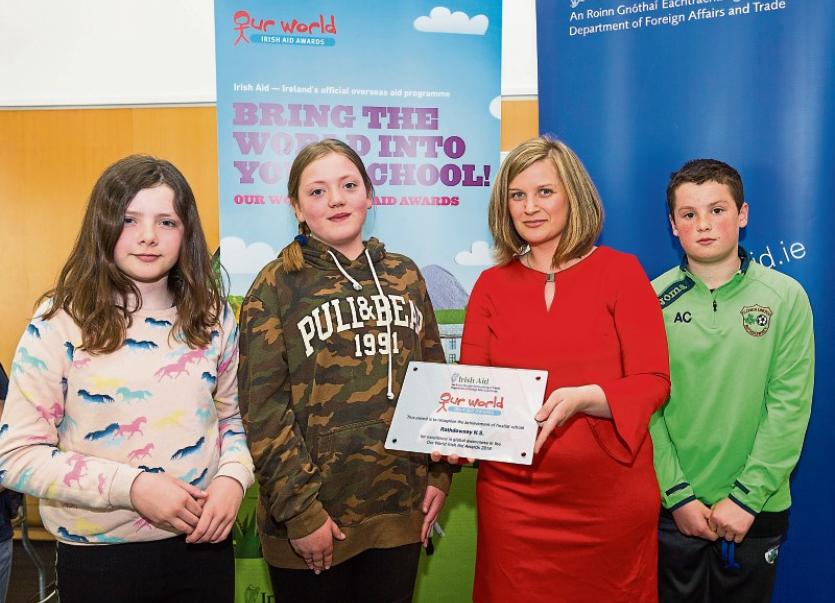 Rathdowney National School in Laois was a regional finalist recently in a prestigious national competition about helping children in the developing world.

With their teacher Mairéad Hogan, the 3rd to 6th Class group from the two teacher Church of Ireland school, showcased their project at the regional final of the Our World Irish Aid Awards in Limerick on May 16.

In their project, the class had used debates as a method of exploring the theme of this year's competition, ‘Transforming our World’.

They debated in front of other classes and against a local school, thus spreading the message beyond their own classroom.

Minister of State for the Diaspora and International Development Ciarán Cannon TD, said that the standard of project entries this year was exceptionally high.

“My warmest congratulations to the teacher and pupils at Rathdowney NS on being named regional finalists. Hundreds of primary school pupils across Ireland took part, learning how they can make a difference to lives in developing countries. It helps to develop our understanding of Ireland’s role in the United Nations Global Goals for Sustainable Development,” he said.

Now in their 13th year, the Our World Irish Aid Awards help primary school pupils learn about the lives of children and their families in developing countries, and how Ireland and 192 other countries are working together to create a safer and fairer world for all children through the United Nations Global Goals for Sustainable Development.

All 15 schools chosen to participate in the Limerick regional final, one of four regional finals, were presented with an ‘Our World Irish Aid Award’ plaque. Three schools were selected to compete alongside nine other schools in the final in Dublin Castle on June 20.