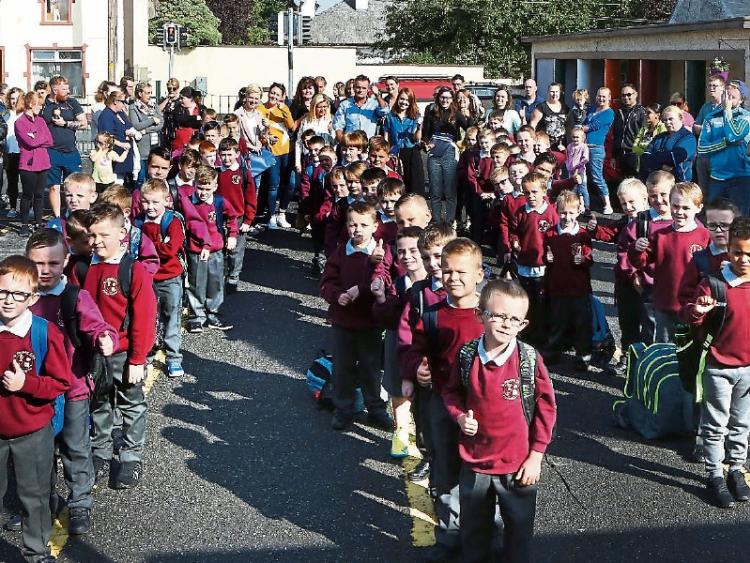 Boys from First Class St Patrick's BNS line up on their first day, the last one in the old school in Portarlington.

It was an extra special first day this Autumn for the First Class boys at St Patrick's Boys NS in Portarlington, the last new pupils to start school in the old building.

In all 64 First Class boys lined up in the school playground on Patrick Street on Wednesday August 28, excited to start, with their parents looking on.

“There was not a tear in sight, maybe some from the parents, all the boys had smiley happy faces,” reported Principal Pat Galvin.

This year the old parish boys national school will close after 66 years.

The 38 staff and 441 pupils will move in Spring to a brand new spacious building on the other side of town, across the Barrow river from Offaly to Laois.

“There is massive excitement among the staff, the parents and the pupils, we have only a few months to go,” he said.

The new school will be a three storey 24 classroom primary school with a general purpose hall and two Special Needs Unit classrooms spread over 4,430 sq metres.

“We are actually moving to a different county. It will be our last year to compete in the Offaly Cumann na mBunscoil, so Laois schools better win quick if they want to win,” Mr Galvin joked.

The new school has been sought from the Department of Education for many years because the old one ran out of room a decade ago.

In 2011 two out of four extra classrooms that were built in 2001 were condemned and closed off, due to sinking foundations causing huge cracks in the walls.

The school community is spread across two schools. Classes are also held in the old girls Presentation Primary school nearby, since it was vacated in 2009.

“Our school is cramped but it is freshly painted and clean and everybody is happily settled down for the last year. It is lovely and homely here but we have just outgrown it. Obviously a better situation is around the corner,” said the principal.

This year being the last, every occasion will feel special Mr Galvin said.

“Everything we will do will be for the last time here. We hold an annual Multicultural Night in the community centre to celebrate all the cultures among our students, at the last count we have 21 nationalities.This year we might make that event a celebration of the final year,” he explained.

The 6th class who graduated last June were the last to leave from the old school, and unfortunately just missed the boat for seeing the new school.

“We hope that our present 6th class will get four or five months there,” the principal said.

The focus now for staff is on the winding down for the big move after Christmas.

“All going well, the school is scheduled to be finished by the end of January. We hope to make the move in the Mid Term break in February,” he said.

He hopes that the Department will pay for all new equipment, but says some furniture may be brought from the old school.

“We will bring a certain amount. We will have an archive room too as past pupils often call to see the Roll books.

Next September they will welcome Junior and Senior Infants for the first time.

Previously the youngest boys started school in Presentation Primary then transferred over.

“Thestaff have done all the training now and the are keen to get their hands on them,” the principal said.

A fundraiser is ongoing to build an all weather pitch at the new school.

The new school is under construction on a spacious site beside Portarlington GAA grounds on the Canal Road, with room for playing pitches and 90 parking spaces. The land is owned by Portarlington Parish.