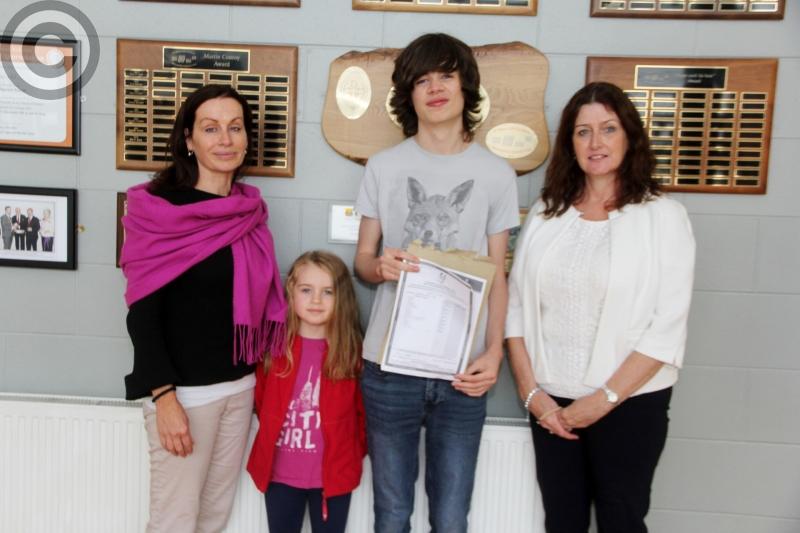 A Portlaoise student is among an elite group of young people to receive a prestigous scholarship that help him advance his studies after an completing his Leaving Cert St Mary's CBS this year.

Luan Fletcher Calt from Kilminchy in Portlaoise achieved 625 points with six H1s and two H2s in his final secondary school exam. Apart from being enough to qualify to study Mathematics at Trinity College Dublin, his results have helped him win a Naughton Foundation Scholarship.

The award is worth up to €20,000 for each of the 36 recipients chosen annually. Some €5,000  is granted per annum for each year of a student’s three or four year undergraduate degree.

The Foundation says scholarship is intended as a reward and encouragement to exceptional students who would like to study in the STEM field (science, technology, engineering and maths) at University.  It is not awarded simply on the basis of points achieved. Students like Luan needed to have been involved in science, tech and maths Olympiads or any science or tech competitions or debates during secondary school.

Luan's alma mater will also be presented with a prize of €1,000 towards the CBS science facilities in recognition supporting these students.

"Luan has consistently achieved in the top marks since he entered in 2012. Across all subject areas, be they language, science, maths, business, history, speech and drama etc.

"Luan has always been at the top of his class. His teachers used words on his reports such as excellent, enthusiastic, diligent, a participator, a pleasure to teach, and I would also add consistent.

"Luan is a perfect example of how a young person who has an interest in many things and who lives life to the full can also, with hard work, perform academically at a very high level.

"Although I am not a science teacher I remember his Scifest projects, which were always selected to move onto the Regional level and further.

"Luan has always made Portlaoise CBS proud and he has done it once again. We all wish him the very best in his future studies and whatever career he chooses to pursue.

"His family must be so proud," she said.

Luan and his mum Emer are delighted with the award. They paid tribute to the CBS.

"Luan says he couldn't have done it without the support and encouragement of Maura and all of his past teachers. Three in particular, Ms Foley, Ms Carroll and Mr Mulligan," she said.

The Naughton Foundation confirmed that Luan will receive his Naughton Scholarship on September 29th in Trinity College.