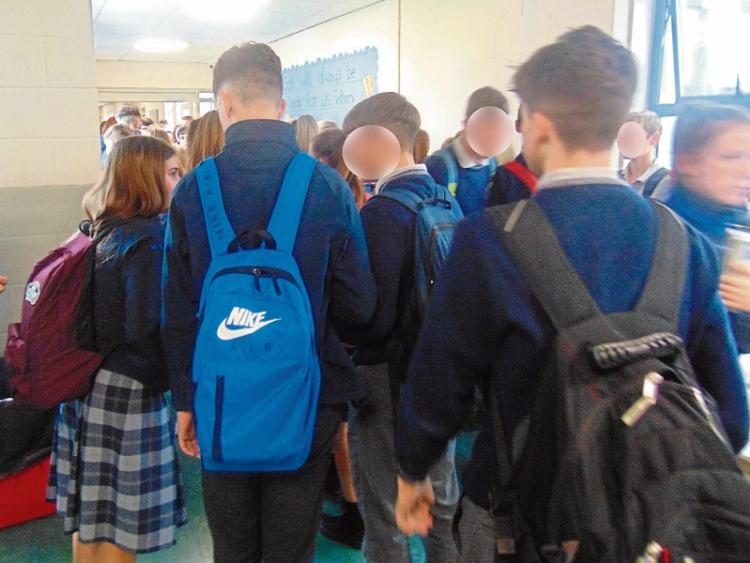 One of the biggest secondary schools in Laois is bursting at the seams in an old building, causing concerns for the mental wellbeing of students, their physical safety, and a lack of subject choice.

Staff and parents of Coláiste Íosagáin in Portarlington are calling for urgency on a promised new 1200 pupil building.

The school has 1,003 students and nearly 100 staff, in an extended building meant for half that number.

They rely on 16 prefabs as well as the 43 classrooms.

The older part of the building dates back to the 1980's and has narrow corridors where students and teachers squeeze by at breaks and between classes.

With no canteen big enough to hold them all, students must sit on the floor or go outside to eat.

Deputy Principal Brendan McGlynn believes the building is affecting the wellbeing of students.

“Students and teachers are trying to work in appalling conditions. The building is not fit for purpose. We had a wellbeing day and the biggest thing affecting people is the building and the lack of physical space,” he said.

“We have 180 first years settling in, but crowds are pushing and shoving and not being able to get to the lockers.

“I am very angry about it. These kids are fantastic, they are all cooperating, I just can't understand how this has gone on so long,” Mr McGlynn said.

He is concerned for how the crowded corridors impact on vulnerable students and teachers.

“We have an autistic unit and they feel high anxiety around the lack of space. A number of teachers are pregnant and have to be very careful on the corridor,” he said.

Leaks are a problem too.

“It is leaking everywhere, I spend time mopping water before the kids come in.I am very concerned at how it is affecting teaching and learning. Teachers are doing their best. The new junior cycle is about teaching in groups but we don't have the space, he said.

Seamus Bennett is the Principal.

“It is tight, we are packed in like sardines, but the big problem is we have not got enough science labs, home economics rooms, metalwork or woodwork rooms. It limits access,” he said.

The prefabs have no facilities for specialist practical subjects. There is only one woodwork room, one computer room and no construction room. A request has been made by the school for specialised prefabs.

He said they are doing all they can to mitigate problems with the crowded corridors.

“We manage it, we have strategically placed supervisors, and we let the first years out first. We shouldn't have to but we just have to be extra conscious and watch crowding,” he said.

Security is a concern. The emergency doors are open so students can get to prefabs, leaving the school vulnerable to intruders.

“It's not ideal. It also means the school is colder and draughtier. Anyone could come in, that is a real possibility,” Mr Bennett said.

He said they do their best to maintain the building.

“We have plumbers in regularly and our caretakers are good,” he said.

He urges speed from the department on a new school.

“The design is with them since last May but they have not come back to us with any answers. 2021 is too late for us. We do not have the facilities we deserve and need,” Mr Bennett said.

“If we got the go ahead now they should be starting next summer,” he added. 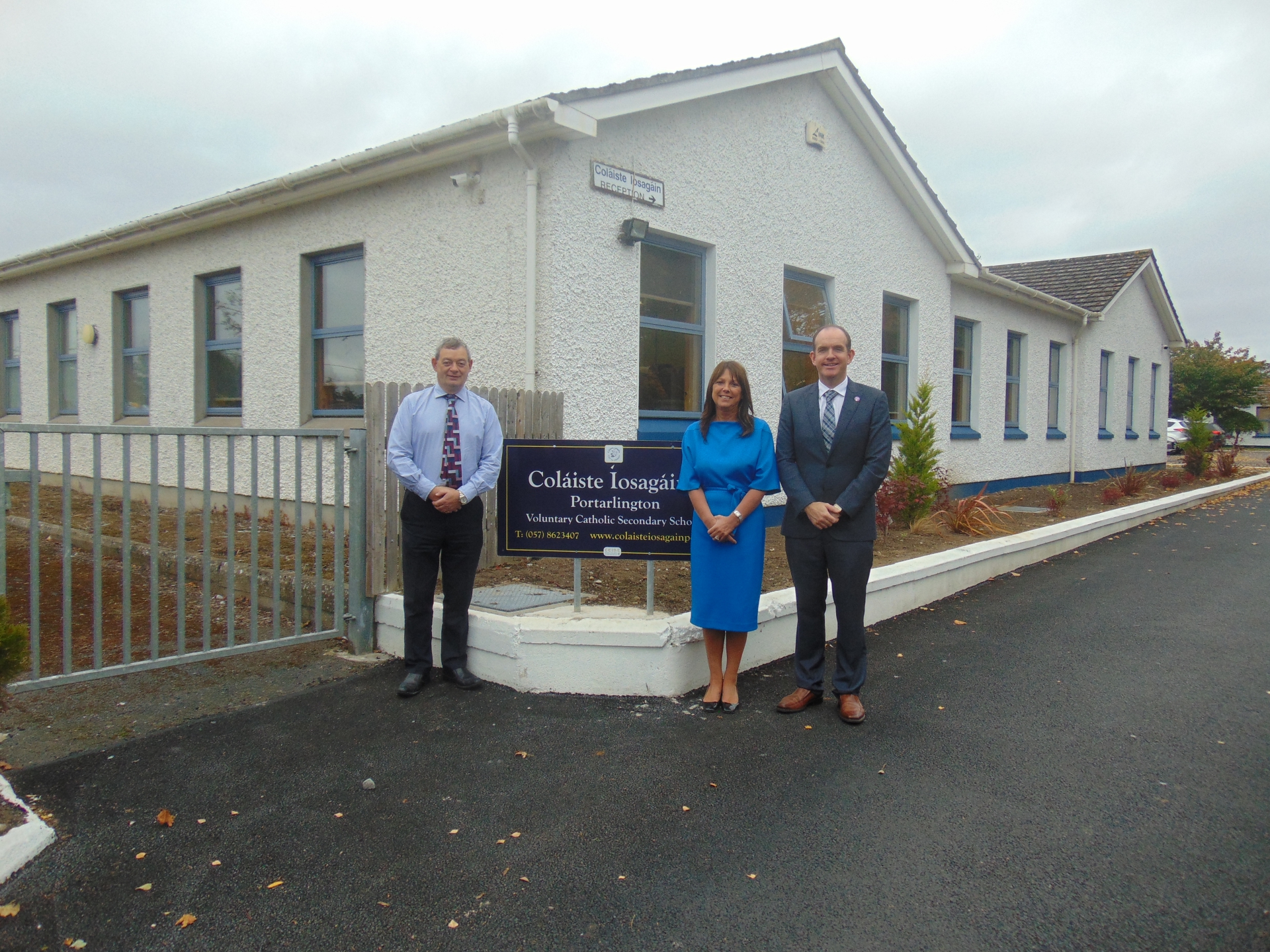 The secretary of the Parents Council of Coláiste Iosagáin fears for student safety in the crowded school building.

Parent Colm Dunne questions how the students could get out quickly if there was a fire.
“God forbid if there was ever a fire, it's going to be mayhem if you're trying to get 1,000 students out,” he said.

He describes the busy corridors between classes and at breaktime.
“It's nuts. Trying to get from one class to another is crazy. There is a one way system so even if you are going to a class two doors to the left you must turn right. The halls are quite narrow. Kids are sitting on the locker area floor to eat. To be in there when all the students are moving, it's crazy. I find it intimidating and I'm 6'6”. What is it like for 12 year olds coming from modern primary schools,” he said.

The Parents Council volunteers to paint in the school, and Mr Dunne has seen problems with the building first hand.
“The ventilation is poor, the place is like a sweatbox. There is mould everywhere. The toilets are horrifying, the sewage system is not able to cope. Even if there was half the population in the school, it couldn't come up to standard,” he said.
“If there was only 500 students, we would not be happy but at least they would all have somewhere to sit,” he said.

He described the impact of not having enough special rooms for practical subjects.
“Students who might be good with their hands have no option to do woodwork or metalwork. It's a lottery system. When you are limiting the choices of children, at a time that education is more important than ever, it's quite sad,” he said.

Mr Dunne emphasises that the school staff are not at fault.
“We are really proud of the school. the school management and staff are super, despite everything they are getting the results. I hate giving out but it's getting to the stage where it's quite dangerous,” he said.

“My daughter is in 5th year. When she started in primary, the word was that by the time she got here, there would be a beautiful new school. She'll never see it. Our concern is that first years this year may never see it, the way it's going,” he said.

“I would not like to be there every day, but I must send my daughter there. They are getting the results, they punch above their weight, but a new school has to happen. The money has been approved but no-one is getting any answers,” Mr Dunne said. 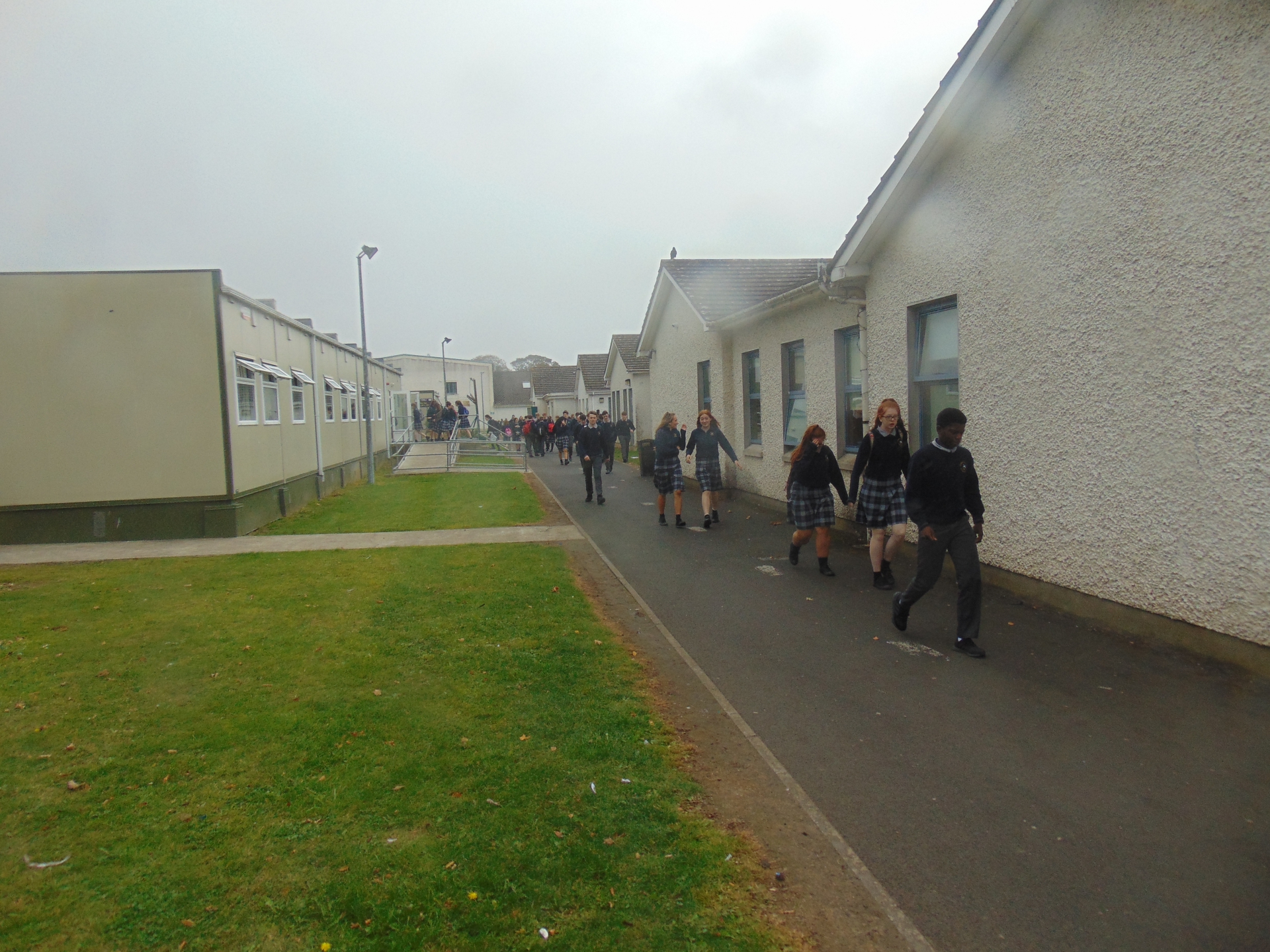 Coláiste Iosagáin students moving to their next class between prefabs and the main school building.

The Department of Education has given this update to the Leinster Express on the project to build a new school for Coláiste Iosagáin.

“The major project for Coláiste Íosagáin, Portarlington Roll Number 68068R is at Stage 1 of architectural planning which entails preliminary design of site and location suitability and initial sketch scheme. A revised Stage 1 submission, including an up to date cost plan, was requested from the Design Team following an increase in the schedule of accommodation to cater for up to 1200 pupils.

“That submission has been received and is currently being reviewed by the Department. The review is nearing completion and the Department will then be in contact with the Board of Management to advise as to the progression of the project.

“This project is included on the Department’s six year school building program to commence construction in 2019 – 21,” a spokesperson stated.