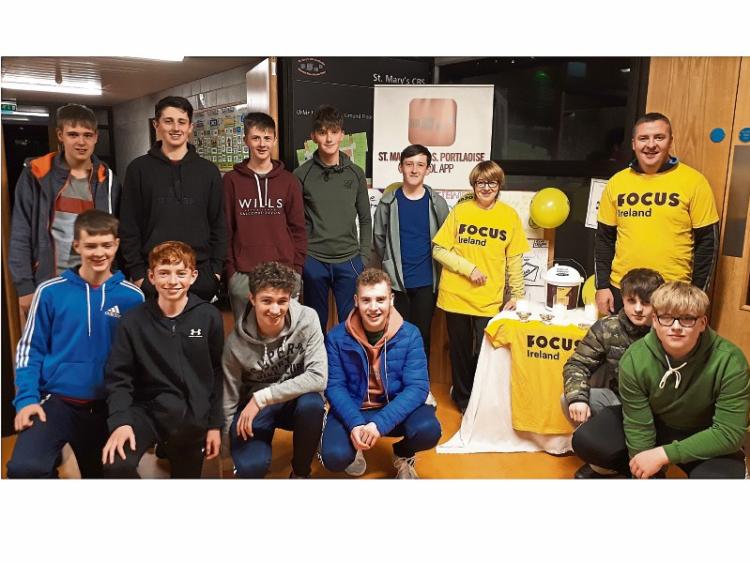 Some of the CBS Transition year students during their sleepout for Focus Ireland, with TY Coordinator Eadaoin O'Connell and Brian Thompson Deputy Principal

The issue of homelessness in Ireland was at the forefront of minds at St Mary's CBS Portlaoise recently, when a group of students decided to do a sleepout to raise money for charity.

A group of 22 Transition Years and three staff returned to school on the stormy night of Friday October 12 to take part in Focus Ireland's 'Shine a Light 2018', an event that hundreds took part in all around Ireland.

They started the sleepout in the courtyard of the school, but with a yellow weather warning in place, it was decided to move inside to the hall.

Eadaoin O'Connell is the TY co-ordinator.

“Focus Ireland advised us to make alternate arrangements and with the heavy rain later in the night it was just as well. It is lucky we had that alternative, but homeless people are facing the elements on a nightly basis,” she said.

The campaign was a first for the school, and she was delighted with the support the volunteers received.

“We set up a GoFundMe account, the students had sponsorship cards and we did a bucket collection in the school on the Friday. People were very generous. We hope it has raised in the region of €1,000, and we hope to build on this next year,” she said.

The junior classes helped with publicity, making posters that were stuck up around the school.

The sleepout lasted from 9pm on Friday until 8am Saturday, and all enjoyed the camraderie of the night, while becoming increasingly aware of the difficulty of sleeping on the ground.

“We brought in a sound system and the boys played cards and played music. Some of them slept quite well but we teachers only got about three hours sleep as we wanted to be sure they were supervised at all times,” she said.

There was a welcome breakfast at 6.30am on Saturday morning, donated by the school caterers, Rafters Restaurant.

“A lady from Rafters got up at 5am to cook breakfast rolls and bring them in, they were very welcome,”Ms O'Connell said.

The overall amount raised has now been confirmed at €1,149.

Focus Ireland is a charity that helps homeless people to find homes, and campaigns to end homelessness. See www.Focus Ireland.ie