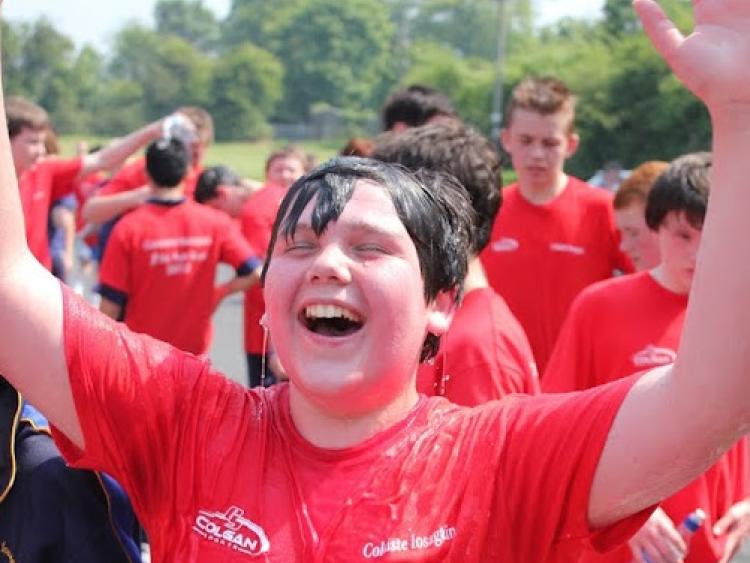 A happy Coláiste Iosagáin student enjoying a previous 5km run in the school.

A massive fitness event in a Laois Offaly school is about to once again fill the streets with action and colour.

Colaiste Iosagain Portarlington is poised to hold its 5km run for the eighth year on this Friday May 17.

Over five hundred students and staff are expected to participate. The school say that for many years it was the only one in Ireland to hold a 5km race, with others around the country now following the trend.

The race will start at around 11.15 am, when a flood of students will flow from the school. The now traditional route is down the Bog Road as far as Marian Hill, turning right into Spa Street, around by Portarlington Leisure Centre, up Main Street and back to the school via Patrick Street.

Guest of honour this year is yet to be announced. Last year it was Mixed Martial Arts local star and past pupil, Philip Mulpeter.

Invaluable technical assistance will once again be provided by St Michaels Athletic Club.

"While there will be prizes for the first three across the line in the Junior and Senior boys and girls categories, the emphasis is squarely on participation and fun," said PE teacher Miriam Holland.

Third Years Dualtaigh Unuvar (18 minute 5k race time) and Eoin Worral (third overall in first year despite finishing with one shoe!) will be podium favorites. Rebecca Fenlon was amongst the best of the girls last year and could emerge on top.

The male teachers’ race is also wide open with old rivals Christopher Booth and Conor Mitchell under pressure from Tom King, Jason Aughney and Keith Bracken and GAA stars Ronan and Martin Walsh can’t be overlooked either. Meanwhile Fionnuala Cleary should easily retain her ladies teachers crown. Once again the teachers are hoping it will be the first year a teacher arrives home overall winner, with repeat winner, student Christopher Whittle now graduated.

"Hopefully the community will continue to turn out to support the participants," teacher John Heraty said.