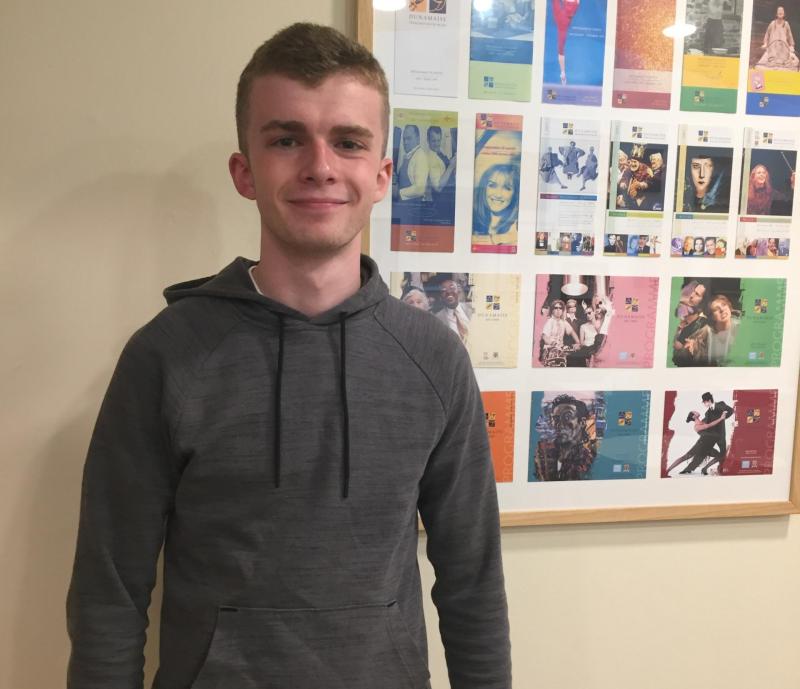 John Davis from St Mary's CBS Portlaoise, winner of a drama scholarship at the 2019 Schools Playwright Competition, part of the RTE All Ireland Drama Festival Fringe.

A Laois Transition Year student has won a scholarship to a drama school for a play he wrote.

St Mary’s CBS student John Davis is one of just two winners of scholarships in the 2019 Schools Playwright Competition, which is part of the RTÉ All Ireland Drama Festival Fringe.

John’s play Across the Miles came in fifth place, from a shortlist of 23 finalists of students around Ireland. Yet it was chosen along with the winner, to merit a residential one-week half scholarship to the ‘Stagewise’ Drama School in Dublin.

He entered the competition to write a one act play at the suggestion of his former first year English teacher Ms Quinlan.
“I've always loved history, and I've always loved that moment in WWII when the soldiers came together on Christmas day. I thought it was perfect for the theme of Connections, and when a British soldier writes home to his wife and child that's another form of connection in my play,” he said.

John was delighted to win a prize.
“It was a surprise. I enjoy writing so it might be something to consider in the future,” he said.

His play has not yet been performed.
“I don't know where or when but it would be nice,” he said.

John is a son of Tom and Kay Davis from Killenard and his English teacher is Ms O'Connell.
The high achieving student is having a busy Transition year across science and sport as well as the arts.
He won the SciFest competition in his school last February, representing the school at the Scifest@College competition in IT Carlow.
John also plays U-17s football for O'Dempseys who are performing well in the league.

He also recently played the role of Pharaoh in his school’s production of Joseph, which included him singing a song.
“It's very much outside my comfort zone,” he said.

The playwright awards were held at the Dean Crowe Theatre in Athlone. There were 400 Transition Year students and their teachers present to hear who won and to see the performance of the 2019 winning play ‘You’ll never really know...’, written by Melanie Arnold from Moate who also won a scholarship to the drama school.