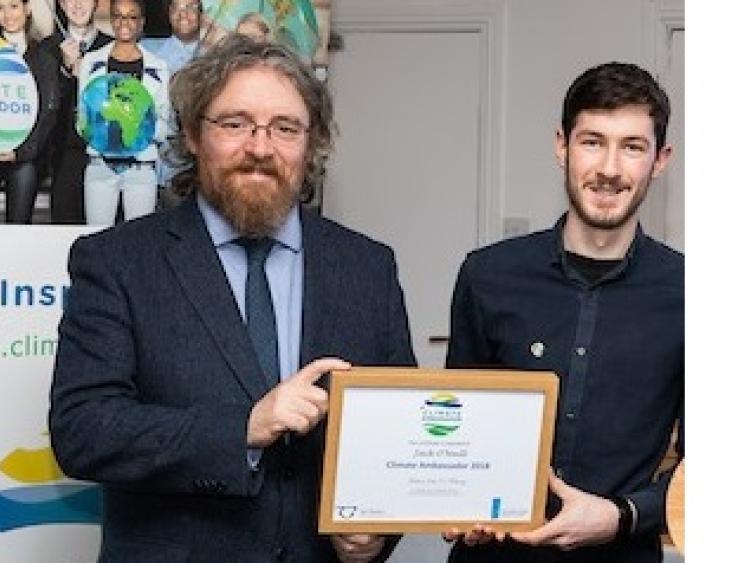 Jack is a leaving cert student at Coláiste Iosagáin in Portarlington.

He was one of Ireland’s first Climate Ambassador’s when the programme began in 2018.

Jack has been involved in the Green-Schools Committee since he started secondary school, arranging biodiversity poster competitions, workshops on making bug hotels, forest litter picks and speaking about climate change to his peers, local schools and community groups as part of Climate Action Week.

The historic Youth Climate Summit will be a platform for young leaders who are driving climate action to showcase their solutions at the UN, and to meaningfully engage with decision-makers on the defining issue of our time. It will be the largest gathering of young climate leaders at the UN in history.

It will be followed by the UN Climate Action Summit, organised for countries to meet and agree a worldwide plan to tackle climate change. Also attending will be reknowned student climate activist Greta Thunberg.

“Don’t think that you can’t make a difference. It's the small things that add up and make an impact in the long run. We all have to start somewhere. Remember that always”, Jack said.

His Green Schools Committee are thrilled for him.

He was delighted when he received the letter from Luis Alfonso de Alba, Special Envoy of the Secretary-General for the 2019 Climate Action Summit.

“I am eager for young climate leaders from all over the world to take their rightful place on the global stage and participate in this historic moment,” the Special Envoy said.

The Youth Climate Summit will feature a full-day of programming that brings together young activists, innovators, entrepreneurs, and change-makers who are committed to combating climate change at the pace and scale needed to meet the challenge. It will be action oriented, intergenerational, and inclusive, with equal representation of young leaders from all walks of life.