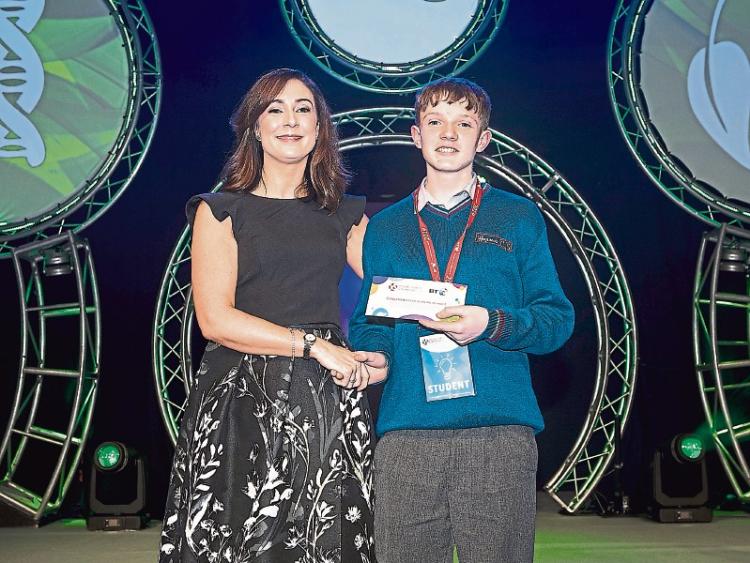 Evan Hogg who won third in the 2019 BT Young Scientist & Technology Exhbition, has one of four Laois projects for 2020

Four projects from two Laois schools will fly the flag for Laois at the BT Young Scientist & Technology Exhibition in January 2020.

The projects from Heywood Community School and St Mary's CBS in Portlaoise will focus on health, the environment and meat.

Heywood has three finalists this year.

Transition Year student Orla McCorry has a study called Trees on the bog – good or bad for carbon storage, in the Biological and Ecological section.

Also in that section is a project by two 2nd year Heywood boys, Luke O'Reilly and Samuel Farrell. Their project is A Statistical analysis on PE taken as an Examination subject at Leaving Certificate level will it improve the overall health and well being of students.

Aodhagan O Suilleabháin heads the science dept in the school, which also enters the SciFest inclusive science fairs in recent years, spurring a growing interest in science by students.

“It is fantastic to have such enthusiasm for science research in our school, our department has worked tirelessly to develop this passion over recent years, and long may it continue.

“Well done to all who applied. Our TYs can exhibit all their projects at our SciFest@School exhibition in late January,” he said.

Their project is titled ‘How nitrates affect humans through meat’ will be in the Biological and Ecological Category.

“The boys are delighted and excited to be going forward to represent the school at what is Ireland’s most popular science event,” said teacher Helen Dunleavy.

“Their initial research began in early September and they will now begin preparing for the exhibition and meeting the judges in January,” she said.

In total, over 1,800 projects were submitted by students in schools all across the island of Ireland.

The exhibition offers a coveted top award with a substantial prize fund and the BTYSTE perpetual trophy, as well as over 200 prizes for individuals, groups, and teachers.

In addition, the overall winner will represent Ireland at the European Union Contest for Young Scientists in Salamanca, Spain, in September 2020.

“It is a trend in itself globally that it is our young people who are now leading the charge when it comes to taking action on issues such as climate change and mental health; and I am personally encouraged to see this same passion and concern coming from our own young people as evidenced in their project ideas,” he said.