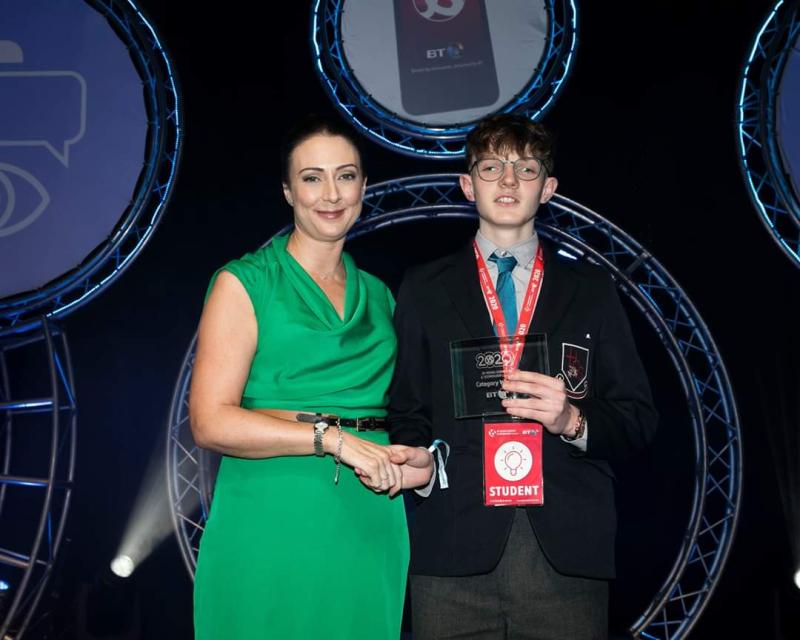 A Laois student who won at last year's BT Young Scientist & Technology Exhibition, has won yet again in 2020.

Evan Hogg is a 5th year student in Heywood Community School who have had multiple teams chosen to exhibit at the prestigious national fair in recent years.

He has won First Place in the Senior Individual Social and Behavioural Science Category.

Evan came up with the idea for his project after examining data he had gathered for last year's Young Scientist where he also qualified for the final stages of the competition.

He observed the differences in physical activity levels (PAL) that existed among second level students and set about to investigate how this was affected by the physical activity of their parents and their own physical literacy. Evan is himself a keen athlete and is a member of Ballyroan Athletics Club.

"I am thrilled to be awarded first place in his category and that all my hard work had paid off. The experience I gained in the competition last year was invaluable this year in terms of my preparation," he said.

In 2019 He won third prize in the Biological & Ecological Science Category for his project on exercise Less is Better.

"It has been great fun and a really good opportunity to develop skills. I've had a fantastic time," he said.

"The school is very proud of the four students who represented the school at the final stages of the competition this year. Evan's category was particularly competitive with 17 projects competing for this award. It was fantastic to see Evan being awarded first place and it is thoroughly deserved for the commitment he has shown over the last few months," he said.

The other Heywood entrants were; Transition Year student Orla McCorry with a study called Trees on the bog – good or bad for carbon storage, in the Biological and Ecological section. Luke O'Reilly and Samuel Farrell's project was A Statistical analysis on PE taken as an Examination subject at Leaving Certificate level, will it improve the overall health and well being of students.

Mr Malone praised the science teachers and students for their success in recent years.

"The Young Scientist competition has gone from strength to strength in Heywood in recent years with 14 projects making it to the exhibition in the last three years. Great credit must go to Aodhagan O'Suilleabhain and the other science teachers in Heywood who strongly encourage students to take part in the Young Scientist and support and tutor them along the way. Taking part is a huge learning experience and students not only develop their scientific skills but also their communication and presentation skills," the deputy principal said.

"The students have been fantastic this year. They really engaged with the work and have learned a huge amount about developing a project. This experience will stand to them in the future. It has been a pleasure looking after them for the last few days," Aodhagan O Suilleabhain Science teacher said.