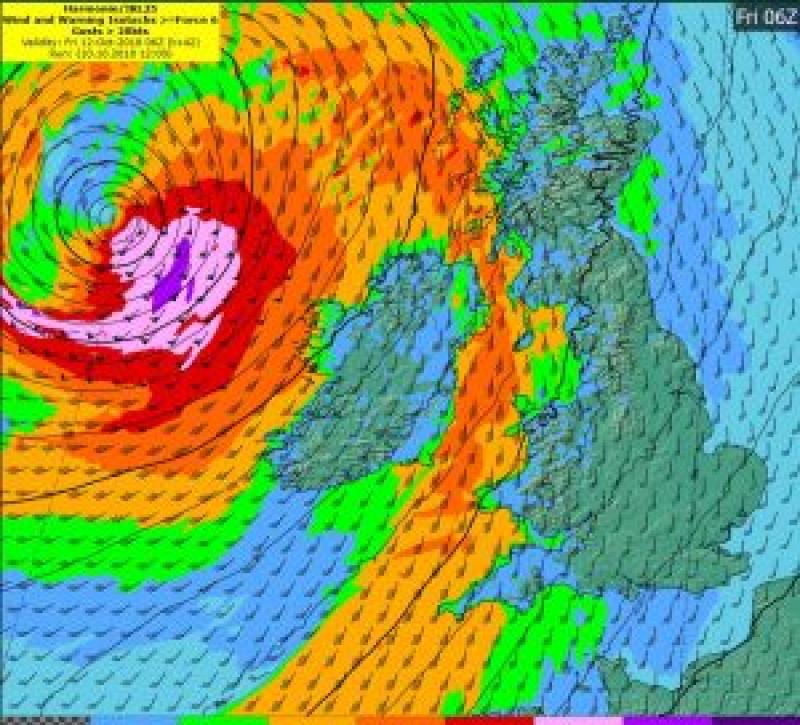 The National Emergency Co-Ordination Group will meet on Thursday afternoon as fears grow over the impact Storm Callum will have on the country.

Met Eireann has issued Status Orange warnings for thirteen counties valid from Thursday night into Friday morning. The height of the storm is expected to hit around the commuter rush hour in the early hours of Friday morning around 6:00am.

According to Met Eireann forecasters, an orange level warning is for wind speeds with the capacity to produce dangerous, stormy conditions "which may constitute a risk to life and property".

Met Eireann has also warned of a "sting in the tail" of the storm as heavy rain is set to follow the high winds in the morning.

"Though the winds will ease down by late morning, a sting in the tail will follow, with a deterioration likely again later, as the trailing waving weather front potentially feeds up further pulses of heavy rain from the south, with the possibility of a further core of severe southerly gusts for south, southeast and east coasts towards evening," forecasters have said.

The UK Met Office which is the Met Eireann weather partner has issued an amber rain warning for South Wales on Friday morning as up to 160 mm possible in places.

An amber rain warning has been issued for south Wales from Friday morning until Saturday evening. Up to 160 mm of rain is possible in some places. Stay #weatheraware pic.twitter.com/yZCNFp8IYW

"Stay away from exposed coastal areas for the period of the ORANGE warning.

"Drive to anticipate strong cross winds and other hazards such as falling/fallen trees. High sided vehicles and motorcyclists are particularly vulnerable to strong winds – slow down and give extra space to pedestrians and cyclists.

"Be aware of local conditions in your area; wind strengths can vary significantly from place to place (depending on the direction and local topography)."

Storm Callum is the third named storm of the 2018/19 season and Met Eireann forecasters have issued the following details on what to expect:

"Not yet formed, but later Thursday into early Friday, a rapidly deepening Atlantic storm depression (936hPa), will advance towards the west of Ireland and track northwards, eventually pulling away towards Iceland by daytime on Friday.

"The strongest winds associated with this event will occur during the night-time hours and Friday morning rush-hour commute.

"Even though the high winds will be the main concern, a spell of heavy and possibly thundery rain will occur too, making for an extremely windy and wet start, with squally conditions associated with the secondary cold front as it tracks north-eastwards up across the country.

"Possibly damaging and disruptive southeast winds will veer southwest after the passage of this front, with the strongest of the winds set to impact coastal areas.

"Additionally there is a concern for storm surge, coastal flooding, and overtopping of waves around coasts, especially Atlantic coasts, due to the coinciding high spring tides.

"Very high seas are expected too, along with storm and possibly violent storm force winds at sea. With trees still in part leaf, there is a concern for felling as well.

"Though the winds will ease down by late morning, a sting in the tail will follow, with a deterioration likely again later, as the trailing waving weather front potentially feeds up further pulses of heavy rain from the south, with the possibility of a further core of severe southerly gusts for south, southeast and east coasts towards evening.

"Elsewhere, however, the winds should remain below warning thresholds.

"The other two storms occurred during September and were named Ali (19th) and Bronagh (20th).

"The highest September 2018 wind speed was a gust of 146 km/h at station Mace Head, County Galway on Wednesday 19th at 08:11 UTC during Storm Ali. Generally, the winds were south-westerly overall during the month. In the previous 1017/2018 season, there were 11 named storms, beginning with Aileen (12th September 2017) and ending with Hector (13th June 2018). This season was notable for Storm Ophelia (2nd storm of the season, after retaining its name under protocols with the National Hurricane Centre in Miami), with a record gust wind speed of 156 km/h observed at station Roche’s Point, County Cork on Monday 16th October 2017 at 10:59 UTC. In the past 30 years, there has been an average of 6 days per year where storm force winds have been observed at a national wind station."